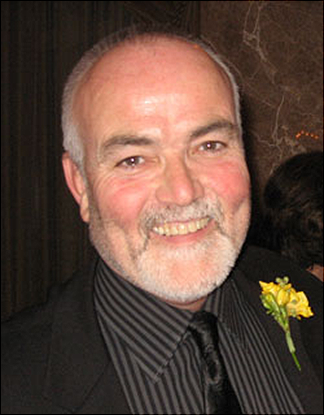 Garrison Roots likened great art to a “near accident” in a car: You are driving, attention drifting, when something darts in front of the car; you hit the brakes and are “snapped back” to consciousness.

“There is a rush of adrenaline, the heart races, the imagination is piqued, and then soberness sets in completely and thankfully,” Roots wrote. “Just for a moment after the incident, one feels fully alive again, shaking with life and thankful for ‘only’ the reminder.”

Great art, Roots argued, can produce a similar experience—“a kind of ‘snapping back’ without, of course, the actual ‘near miss.’”

Roots, professor of art and art history at the University of Colorado Boulder, helped to snap people back to a fuller appreciation of life both with his art and his magnanimity, friends and colleagues say.

Graham Oddie, CU professor of philosophy and former associate dean for arts and humanities in the College of Arts and Sciences, began working closely with Roots in 2005, when Roots became chair of art and art history and also was diagnosed with cancer. 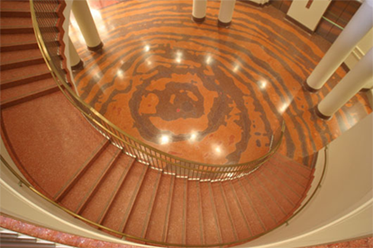 Garrison Roots' most recent public-art commission was for the Denver Justice Center, where he produced “Acumen,” an epoxy resin terrazzo art floor for the public lobby.

“He chaired the department for six years, and he didn’t do it for money or power, but for love,” Oddie said at the event. “And not just love of CU, but love of the idea of the university.”

Even while battling disease, Roots oversaw the design, construction and occupation of the Visual Arts Complex at the gateway to the CU-Boulder campus.

As associate dean and department chair, Oddie and Roots traveled often to raise funds for the Visual Arts Complex. Along the way, they swapped anecdotes and insights.

“I’m a philosopher, and he’s an artist,” Oddie said. “He helped me to understand an artist’s view of the world from the inside, and I guess I helped him think more systematically about his own views about what he was up to.

“He liked my desire for clarity and rigor, I suppose, but I liked to hear what it was like to be artistically inspired, and how to implement an artistic vision.”

In recognition of the ELP Award, Roots also was paid tribute at the event by Todd Gleeson, dean of the College of Arts and Sciences at CU-Boulder, and Yumi Roth, associate professor and interim chair of Art and Art History.

“He once said, ‘The last thing I want to be called is a competent artist’ because it implies a kind of dullness,” Roth said. “He has never been ‘just competent,’ but has been an inspiration to the department. He brought cohesion to a department that was sometimes divided.”

Roots was born in Abilene, Texas, in 1952. As a child in Texas, Roots and his father watched a television program about Jackson Pollock, the abstract expressionist painter.

Roots’ dad was riveted, exclaiming, “I have no idea what this is about, but I know it’s extremely important!” At that moment, Roots decided to become an artist, he later said.

But his path to artistry was indirect. Roots left school in the eighth grade, then worked for General Motors and at other jobs. He joined the Navy in 1971.

Upon his honorable discharge, Roots hit the Dallas airport with just enough money for a pack of cigarettes and a one-way ticket to Boston. He traveled to see his friend Doug, a fellow enlisted man, and stayed with Doug’s family.

After the friend returned to active duty, Roots found a job in Keene, N.H. Over breakfast one morning, Roots told his friend’s mother that, someday, he wanted to go to college.

Frank Easton, longtime friend of Roots, recounts the mother’s dry reply: “Garrison, either go to school or stop talking about it.”

Roots rose from the table, borrowed her car and drove to Worcester Museum of Art. There, he enrolled in art classes.

“He was a natural artist,” Easton writes. “After a few courses, they told him he was wasting his time. He needed a real college-level art program, so he applied to Keene State College, where I met him.”

There, too, one of Roots’ professors suggested that the young artist could more fully hone his skills elsewhere.

With financial support from the G.I. Bill, Roots transferred to the Massachusetts College of Arts, from which he graduated with distinction in 1979. He earned a master of fine arts from Washington University in St. Louis in 1981 and joined the CU-Boulder faculty as an assistant professor of fine arts in 1982.

Described as a brilliant and prolific visual artist, Roots’ work was exhibited around the world. He was a founding member of ARTNAUTS, a visual-artist collective dedicated to exhibitions that address global issues, especially border disputes and immigration.

Roots was noted for his large-scale, site-specific sculptural installations and collaborative public works that are “often allegorical and meant to be walked through rather than around,” a colleague observed.

Roots received two fellowships from the National Endowment for the Arts, a visiting professorship at the University of Wisconsin, Madison, the 2008 Distinguished Alumni Award from the Sam Fox School of Design and Visual Arts at Washington University, and a CU Arts and Sciences College Scholar Award for the spring of 2012, which, had he lived, would have enabled him to complete a number of ambitious sculptural projects.

He was a highly successful public artist, securing commissions in Miami, Lisbon, Portugal and Texas. His most recent public-art commission was for the Denver Justice Center, where he produced “Acumen,” an epoxy resin terrazzo art floor for the public lobby. “Acumen” features “images from nature that are rich in color and provide a sense of peace,” a Denver website states.

Easton said Roots “saw art in everything.” More precisely, Oddie observed, Roots “had this ability to see the potential for aesthetic experience in lots of things that would never have struck me as aesthetically interesting.”

Generations of graduate and undergraduate students admired Roots. His Facebook “wall” features scores of tributes from friends and former students.

On the day of his death, for example, one of them posted this:

“I have no doubt that many, if not hundreds, of those who were touched by Garrison are doing what I am doing now—sobbing. … He was a constant inspiration to me (even though we disagreed a lot when I was his student). He taught me how to love teaching and learning, how to embrace and celebrate conflict as an opportunity for growth, and how to drink this life in and never let what other people think change your vision.”

Many of his students have themselves become successful artists and teachers.

Another friend called Roots “a remarkable man who against many odds was able to live a true life where his gifts and talents could take center stage. Most people aren’t that fortunate.”

Roots is survived by his son, Tyler Roots, by his first marriage, and by his wife, Veronica Munive Alvarado, of Longmont (and originally from Mexico City). She married him in 2004 and was by his side at the end.

Friends noted Roots’ devotion to his family and his love of motorcycles, which symbolized the artist’s core passions.

Once, when Oddie was driving Roots to a hospital, Roots asked to stop at a local Harley-Davidson shop. They spent two hours analyzing and admiring the machines. “He loved those motorcycles, because he saw them as amazing sculptures in their own right,” Oddie said.

And when old friend Easton rides one of his motorcycles, “I’ll remember how he loved to ride … wringing everything out of that machine that she had to give.”

To view some of Garrison Roots’ work, see http://garrisonroots.com. A memorial service will be at 2 p.m. Jan. 21 in the Visual Arts Complex Auditorium at CU-Boulder. It will be followed by a reception in the British Studies Room on the fifth floor of Norlin Library. In lieu of flowers, the family would appreciate donations to the Garrison Roots Memorial Fund to support graduate scholarships in sculpture at the Department of Art and Art History. Checks should be made payable to the University of Colorado Foundation, College of Arts and Sciences, 1305 University Ave., Boulder, CO 80302. For more information about the Department of Art and Art History, see http://cuart.colorado.edu.

Tagged with:
College of Arts and Sciences, Department of Art and Art History, Excellence in Leadership Program