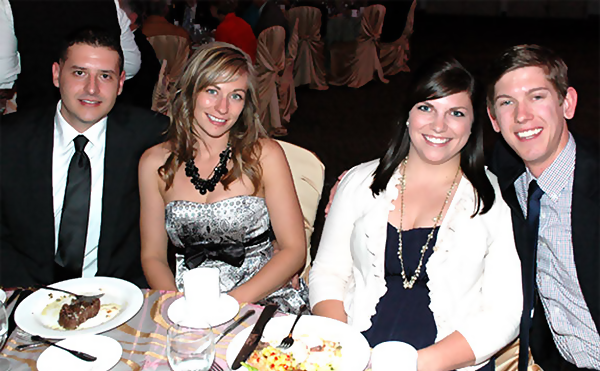 Army veterans who are now students at CU Denver and CU Anschutz enjoy dinner with their wives at the "Combat to Classroom" gala at The Liniger Building at CU South Denver. From left are Joel and Krystle Martinez and Megan and Brian Shreve.

Gregory Stube, a retired Green Beret and featured speaker at Combat to Classroom: A Salute to Service, politely encouraged attendees to "throw your wallets at this auction" with the goal of transforming today's soldiers into tomorrow's leaders. They did just that, raising over $170,000 to fund scholarships for combat veterans at CU Denver and CU Anschutz.

The event was jointly held by the University of Colorado and The Wildlife Experience on Oct. 10 at The Liniger Building at CU South Denver. Nearly 500 people attended the silent auction and dinner, including over 20 veteran students and their guests who received gratis tickets from a generous donor.

Two of those servicemen, Army veterans Joel Martinez and Brian Shreve, enjoyed dinner with their wives. Martinez is majoring in public health at CU Denver while Shreve is a first-year student in the School of Medicine at CU Anschutz.

"I wasn't even aware that CU Denver had such a deep commitment to veterans," said Martinez, who served as an Army medic and plans to become a physician. "It's awesome. I've never seen anything like it. It's just not something a lot of other people pay attention to."

Both Martinez and Shreve said they would likely apply for the scholarships that the annual gala funds. "Having some financial assistance and being able to maybe not work and just concentrate on studies would definitely be a great help," said Shreve, who plans to specialize in emergency medicine.

Shreve said he was impressed by the assistance he received in the Veteran Student Services Office at CU Denver. "All of my experiences with the veterans offices at CU Denver and CU-Boulder (where he earned his bachelor's degree) have been great."

"This clinic gives them one less thing to worry about so they can focus on their education," Elliman said. "As, of course, do scholarships, which is why we're all here tonight. We're so very grateful for the Linigers and everyone here for supporting scholarships for combat veterans." 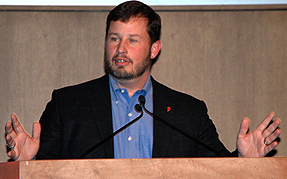 SFC (Ret.) Gregory Stube talks about harnessing the leadership potential of veterans through education as featured speaker at the Combat to Classroom scholarship fundraising event at the Liniger Building at CU South Denver on Oct. 10.

"The Wildlife Experience has been a cultural touchstone in this community," Elliman said. "By adding higher education to the program, we believe we can build on that for many, many years to come."

The chancellor noted that when it comes to student veterans, they deserve far more than a "thank you" when they come home. "They deserve a stellar education and a great career, and that's what CU Denver and CU Anschutz try to help them achieve," he said.

Elliman presented a challenge coin bearing the Boots to Suits insignia to Dave Liniger. A challenge coin is a small medallion that is often presented by a unit commander in recognition of a special achievement. "I'm honored to present this tonight to Dave in recognition of his vision, his generosity to the university and his generosity to our student veterans," Elliman said.

Liniger, a Vietnam veteran who served in the Air Force, pointed out that the expenses of college after returning from service can be a "pretty tough road" for many veterans. "We owe a debt of gratitude to veterans," he said. "We've got to help those that want to come back (to school) become educated and do something with their education. There's not enough public awareness."

Stube talked about his lengthy 23-year military career, which saw him rise from infantryman to a rank of Sergeant First Class serving in the Army Special Forces. He directed his closing remarks to veterans, telling them to aspire, like America's first president, George Washington, to "answer that call to service beyond the uniform." 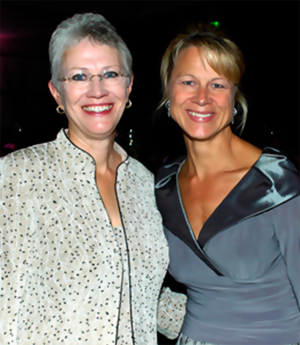 Stube said the greatest gift an American warrior can get is to be "reintegrated back into the society that they swore was worth fighting and dying for. ... I think you've done something right here (at the fundraising gala). I firmly believe that instead of creating (memorials) for people who have served the country, why don't we recognize them for the leadership potential they have? Why don't we harness that?"

Stube, who received a Purple Heart for injuries sustained in battle, praised the generosity of the attendees, telling them, "You're not giving someone this sympathy (for being a combat veteran). No, instead you're offering a springboard into the future, and a nice kick in the pants... Go get your education. We will help you. I think that's where our truest strength as a nation lies tonight."