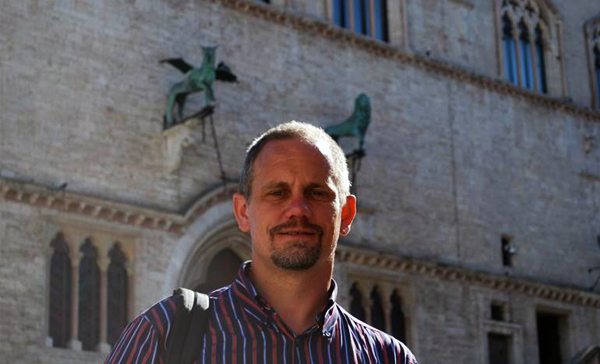 Growing up in Milan, Italy, Valerio Ferme was no stranger to great literature. Dante was required reading and his parents encouraged him to read and think about literature as a way to look at the world.

So although a young Ferme came to the United States with the idea of being a doctor, and earned undergraduate degrees in biology and religious studies from Brown University, his love of literature and reading won out.

“I realized that what I was doing all the time was reading,” he said. “I have always been an avid reader and I decided that might be something that I wanted to pursue more carefully.”

He joined the University of Colorado Boulder in 1998 and currently is an associate professor of Italian and chair of the Department of Italian and French. With specialties in 19th- and 20th-century Italian literature, fascist aesthetics, modernism and the avant-garde, and cultural studies, his published works include a book that examines the influence of American cinema and literature on fascism, an introspective book of poetry, and various other publications that examine Italian culture.

Currently, he’s organizing the annual conference of the American Association of Italian Studies, set for March 2015 at CU-Boulder.

1. You have written about Italy and cinema and you teach several cinema courses. You’ve also written a book of poetry. Were these endeavors an extension of your interest in society and culture?

The first book I wrote, “Tradurre è tradire: La traduzione come sovversione culturale sotto il Fascismo,” focuses, among other things, on how cinema, especially American cinema, was very influential in Italy under fascism. The book title translates into “To translate is to betray” and the subtitle is “Translation as cultural subversion under Italian Fascism.” In the book I discuss how cinema was used to undermine some of the fascist regime’s dictates. For instance, some movies portrayed the out-of-luck guy who gets a group of people together and manages to make it against oppressive capitalist interests or authorities. People viewing the movie compared themselves to the situation. And since the talkies became common during the 1930s, language of cinema also played a role by going against the rules of fascism, often subverting some of the language that the regime advocated.

One of my mother’s cousins is a film producer in Italy, so cinema always was in the background of our family. Cinema is a great field for me because it combines a lot of my interests: the visual arts are a form of narrative, which for me, connects well with literature, and also tells a lot about culture and society. One of the courses I have developed is “Italian culture through cinema.” Because the new generations are so visual, it is an easy way to get students interested in a different culture. I have a very large collection – about 500 – DVDs of Italian films that I continue to build on in order to get new ideas for films to show my students.

I’ve always written poetry. “Diario Italo-Americano, 1989-1996” – as you can see from the title – is a diary about moving between countries. It is the essence of who I am. I grew up in Italy with people who used to say, “You’re an American” because my mother was American-Italian. When I moved to the United States, I was the Italian. The poetry is mostly about geography and how that geography spurs me to think about myself and my place in the world. While it was published in Italy, there is a section containing poems written in English, which for me highlights the split nature of my identity.

2. And your current book – is it also about Italian culture?

It has been a very busy time for me. I just finished a co-edited book on work and labor in Italian culture, and last year I published a co-authored book on Italy and the Mediterranean in the post-Cold War era, in which we discussed how the past 30 years have seen a significant focus on the “Mediterranean” nature of certain fields of knowledge in Italy. Currently, I am revising a book that has already been accepted and will be published next year. The book focuses on a different area of my interests, which is Giovanni Boccaccio’s “Decameron.” Boccaccio is a medieval author who wrote the first novel-like book in the Italian Middle Ages. The book is a collection of short stories that provided materials, among others, for Chaucer’s “Canterbury Tales.” It is a very funny book and can be a little bit licentious. I was not a medievalist, but at CU, we did not have a medievalist in Italian so I started teaching the course “Boccaccio and the Age of Realism.” I started teaching the class about 16 years ago and it became one of my staples and has been a very popular course. As I was teaching the course, more and more ideas came to me and I decided to write the book.

The book is titled “Boccaccio’s Galeotto: Women and Honest Enjoyment in ‘The Decameron.’” I was surprised how quickly I was able to complete this book. I began writing in July of 2013 and spent a semester sabbatical working on it.

3. As part of a CU outreach program, you present programs in several southern Colorado communities, including one on how Dante is still relevant today. What is it about Dante’s writing that is still so pertinent?

I discussed Dante in Trinidad. Right now I’m teaching Dante’s “Divine Comedy” to a class of over 60 students. I’m a big proponent of the humanities. I know there has been a call for people to do STEM fields, but the reality is, some of the things that humanists like Dante have to tell us are still very relevant today. He tells us how to be human and how to behave in a world that is sometimes very confusing. What I like about Dante that I stress to students and others who will listen to me, is that Dante is a fantastic creator of worlds. He is incredibly creative, a quality that comes from reading extensively and from being engaged in his world. But the real message from Dante that I like to talk about with students is his dedication to civic engagement. Throughout the “Divine Comedy,” he talks about the importance of being engaged in one’s world and in one’s society and about being a good citizen. People can really learn from that, especially because there’s been a movement somewhat toward more individualistic goals. Dante has a lot of issues: He’s very arrogant and yet he’s going through this humble trip through the afterlife to be saved. But he is constantly thinking about what is important for his city, his society and his country. That kind of message still is poignant. If we all could focus a little more on that, I think, maybe naively, that the world would be a better place.

Dante also is a master of language; he practically invents a new language and he does it with creativity and rigor. These are things I like to convey to students: Always be demanding of yourself and pursue your academic interests with rigor, creativity and a thirst for knowledge, in whatever field you are working.

4. What are some of your most memorable experiences or achievements since you’ve been at CU?

From the standpoint of my job, I would have to say receiving the Boulder Faculty Assembly Excellence in Teaching Award. To me, it was recognition of the work I put into teaching. From a personal standpoint, I would have to say adopting two older kids by myself. It was not easy to balance it all by myself. But when I talk about civic responsibility, this is what I mean. A lot was given to me by my parents in the way of opportunities, so this was something I thought I could do to give back. I adopted two boys, 10 and a half and 11 and a half. It was an important part of my life that I wanted to fulfill. They are now 22 and 19, and somewhat more manageable (laughs).

5. Do you have a favorite item that you keep in your office and what is the story behind it?

Right now my office is bare because I came back last year from a sabbatical, but what I have had on my wall is a plaque that recognizes me as a first-team, all-Ivy League in rowing my senior year at Brown. For me, the award symbolizes a driving concern of mine: When you are rowing in an eight-man boat, you all have to work together or you won’t go very fast, so it is all about collaboration and trust. The plaque underscores that we were considered the best team in the Ivy League that year, but it was more about how these eight people and the coxswain came together to achieve a goal. That has always been a driving concern of mine: I love collaborative work, being able to work with other people to achieve a goal. That plaque reminds me that, while I work in my own research cocoon most days, it is only by cooperating and collaborating with others, including colleagues and students, that I, my department and my classes can attempt to achieve greater goals. To quote Aristotle, I am a believer that “the whole is better than the sum of its parts.”