As he worked toward his Ph.D. in history at the University of Colorado Boulder, Tom Noel wanted to find a topic that would 1) sell, and 2) enchant the general public. He succeeded in both. His dissertation examined Denver through the lens of life at local taverns. The book, 1982’s “The City and the Saloon: Denver, 1858-1916,” still is in print and he proved that history really isn’t dry.

Through the years and 41 books later, he still works to make history less intimidating for everyone, from his students to those who participate in his walking tours, which use a variety of venues around the city to illuminate the past.

Noel, a professor of history and director of public history, preservation and Colorado studies at the University of Colorado Denver, has been connected with the campus since 1978. He began leading tours as a part-time teacher when “you would only get paid if the students enrolled.” On one rainy day, the group took refuge in Charlie Brown’s saloon, and Noel is sure at least two marriages and several affairs resulted from the detour. That’s how the bar tours began.

As he’s gotten older, he said, he’s conducted fewer bar tours and more that focus on churches and cemeteries. Students in his classes often play the roles of historical characters for his Halloween cemetery tour.

“In Colorado, you can go out and see where things took place or interview people who were connected with it or their descendants,” said Noel, whose love of history began early. “You can see the first generation of log cabins and homes and buildings in ghost towns. It always fascinated me that we are this close to the first settlers.”

Noel also is co-director for the Center for Colorado and the West. In conjunction with the Auraria Library, the center is listing all the new nonfiction books on Colorado, especially those that are self-published. Some of the better publications will be reviewed.

“Newspapers are shrinking and they don’t review books the way the used to,” he said. “And the academic journals don’t focus on the narrow local history.” The center also is publishing history resource guides that have been written by grad students. One focuses on Native Americans in the state, and related museums, websites and other resources. Another examines Hispanics, while future guides will detail mining and ethnic groups in the state. 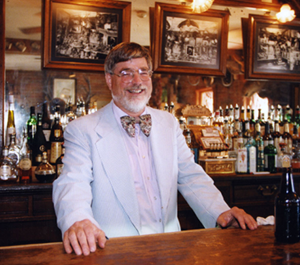 Noel is interested in preservation and serves on the preservation committee for History Colorado. He is a former chair of the Denver Landmark Preservation Commission and a former member of the National Register Review Board for Colorado. One of his books, “Buildings of Colorado,” which he considers one of the most important, detailed the state’s significant buildings, but is now out of print. He’s considering updating the volume, first published in 1987, to document new and valuable edifices.

“Every community has some building that they are proud of,” he said.

Away from home, you’ll likely find him wearing his signature bowtie: “Students pay a lot of tuition so they ought to get a real professor with a bowtie, not somebody in blue jeans and a T-shirt.” When he’s not touring, speaking, writing or grading papers, you might find him “puttering” in the garden. “The challenge is to get something to bloom year-round. Anybody can make their garden look good in June.” He also enjoys swimming and canoeing, and collecting books – with Colorado history as a focus, of course.

1. Have you ever discovered something surprising or shocking during your studies of Colorado history that changed what we thought we knew about our state? What is your favorite era and why? 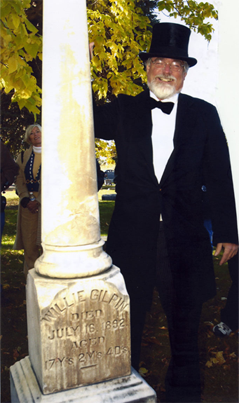 The city of Denver was originally called Mexican Diggings. The year before white folks discovered gold, there were Hispanics along the South Platte -- about where Florida Avenue goes over the Platte today -- who found gold and established the town of Mexican Diggings. This was in Jerome C. Smiley’s History of Denver, who found this through oral history, but there’s never been a mention of it anywhere else. It’s typically of the lost and stolen Hispanic history, where Hispanics get there first and establish a town but they are chased off and the name is changed to an Anglo name. So instead of the Mexican Diggings Broncos, it’s the Denver Broncos. The history is forgotten and there’s not a marker or anything there. I’ve fussed about it and written about it, but there’s not a trace of these Hispanic origins in what is now the city of Denver.

I love the Progressive Era, which was ‘round 1900 to World War I when the City Beautiful Movement was transforming the nation, putting parks in Boulder and Denver, developing Denver mountain parks and Civic Center Park. There was a big emphasis on libraries and schools and museums. It was a great era for public construction and the idea that you could uplift the masses, that poor people would have access to libraries and plays and the finer things of life. Since then we’ve focused on more private development and not so much on public sector, so schools and libraries are struggling.

2. What are some historic buildings or places that are threatened that you believe should be saved? What has been destroyed that you feel is a huge loss to the state?

I think I became interested in doing my dissertation on the bars of Denver and skid row after seeing how many beautiful buildings were being knocked down. They were kind of derelict but built with great materials and could have been fixed up. You could see what urban renewal was doing all across the country in the way of wiping out great buildings like the Tabor Grand Opera House and so many fine hotels and structures built by the pioneers to last forever.

We lost our greatest, and one of the most wonderful buildings in Denver, when they demolished the opera house. Tabor, a U.S. Senator and silver magnet, built it sparing no expense. This extravagant building constructed with the best materials and great architectural design was knocked down, gone. Another loss is the smelter stacks around the state. They were a great monument to the mining industry, which was basic to Colorado’s early years. It was the gold rush that gave birth to the state, yet most smelters have been knocked down. One remains in Salida, but we had a great one – the Omaha and Grant Smelter in Globeville. Smelters are visible landmarks and reminders that so many of the state’s cities started with the gold rush.

Some of the things I think should be saved are the waterways and ditches – like the Highline Canal – where you see cottonwoods growing. They should be turned into bike paths and recreational amenities. Water should be put back into the Highline. We should also turn old, abandoned railroad grades into bike paths and trails as alternate forms of transportation. Some of this has been done but the movement has run out of steam. Sometimes private owners have obstructed efforts or whoever is trying to get this done doesn’t have the money to buy something from a landlord who is holding them up for an exorbitant amount of money.

3. What is a favorite part of your research?

A favorite thing and what I’m best known for is writing about saloons. Some of the history includes exploring ethnic groups, including the poorer Poles and Italians or Greeks who didn’t have country clubs or didn’t have much money, but did have their corner taverns where they could relax. I found out a lot about the Black, Hispanic and gay bars, too. I see parallels with gays and ethnic groups because gays suffer from some of the same discrimination that the Irish and Italian people suffered in the old days. They were comfortable in their own saloons because they often were insulted or not served or mistreated in any other kind of tavern. I also looked at how taverns served other functions: There was art, theater, dance and music in some of them. Ethnic songs and rituals were preserved, especially in German bars where you would actually hear Mozart and Beethoven or read newspapers in the home language or eat German food. Taverns also were important to labor unions and it was a place where you might meet your spouse. So a lot more went on in the taverns than drinking.

4. What is something you hope students will remember from your classes?

I drive this point home over and over: We palefaces weren’t the first folks here. There were Native Americans here and often they lived exactly where there are settlements today. The nice climate, water, a good view, and whatever attracts people today also attracted Native Americans. And like with Mexican Diggings, many, many communities were originally ancestor Hispanic places. So you should try to figure out who was there first.

5. What worries you most and heartens you most about our study of history? What would you put in a time capsule today to be opened in 100 years?

What worries me most is that students say, “I love history, but how am I going to make a living?” There are not many jobs out there and 100 people apply for one job that pays $20,000 a year. It’s sad that there’s not more of a place for history and historians. What’s heartening is that history makes a great avocation. You can make your living some other way but have history as a hobby. If you know something about your community, you’ll have a lot more interest in it and voting and participating in the community and things like history preservation. History is a good general background for any profession and ultimately makes life more interesting.

As for a time capsule, I’d put all of my books in it, of course, and a copy of The Denver Post. It might be fun to put in a bottle from each of brew pubs -- there are 109 now. Since I’ve studied taverns, I’ve also become interested in the brew pubs. They have some interesting labels and fancy names. And while we’re at it, let’s throw in the best wines from the Grand Junction area.

Tagged with:
Center for Colorado and the West

Send your thoughts and suggestions for the Newsletter.
END_OF_DOCUMENT_TOKEN_TO_BE_REPLACED