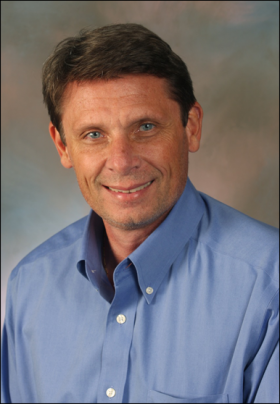 The story of Thomas Duening's career is, by his own description, one of an entrepreneur. It's about building something from nothing, something with a lasting foundation. It's about creating jobs, not getting a job. It's about putting something into place that doesn't depend on the founder.

Duening co-founded his first company at age 26 while he was working on his graduate degree and doctorate at the University of Minnesota. In 1991, he cashed out his interest in the company and was hired as the assistant dean of the business school at the University of Houston. There, he worked with one of the top scholars in management in the world, Jack Ivancevich, who taught him many things, including the book-writing process.

In 1992, he helped found a successful center for entrepreneurship in Houston; in 2000, he left academia to run an e-learning company.

"Unfortunately, that didn't work out. We got caught up in the dot.com crash," Duening says. "So here I was, out on the street with a bank account that had been bludgeoned by the stock market crash and because I put a lot into this deal. So what do you do when you're out on the street? You go back to the fundamentals when things aren't working out. At the time, I was a book writer, so I got a contract to write a book on outsourcing, which was a phenomenon at the time."

While writing the book, he met a man in Bangalore, India, and they started a company together. At the same time, he approached the dean of business school at the University of Houston downtown campus and offered to start an entrepreneur center there. During the first year of that endeavor, Arizona State University recruited him to be the director of the Entrepreneur Programs Office in the School of Engineering. Five years later, CU approached him, and he and his wife left the hot summers for another chance to "build something from scratch," Duening says.

The difference between small business and entrepreneurship is that small business is lifestyle-oriented. Typically the founder needs some entrepreneurial skills during the founding, but then the business becomes their life. They operate the business; they go there every day. Entrepreneurship is more growth-oriented. You need to know more about how to create capital, stage your capital, invest, and how to grow a business. It's about getting a system in place that is able to operate without you having to tend it every day.

The visibility of entrepreneurship as a career option has increased dramatically over the past 20 years. It's more visible because of the Internet and people can see what is happening. There are more publications that highlight young entrepreneurs and the fact that they're able to find more success. Look at the Facebook guy – Mark Zuckerberg – he's 26 years and the 35th wealthiest person in the United States. So the mystique that has been created is really great. There's also an embedded infrastructure that is far more supportive. Organized angel capital now is equivalent – in terms of amount of dollars invested every year – to venture capital.

Angels come in during those very early stages when any company is mostly an idea with a couple of folks are hanging around trying to make something work. The more money that goes out early to companies, the more likely one of them is going to be a hit. And it's not just youth anymore. There's quite a surge of entrepreneurs in the over-50 crowd, folks who have accumulated enough wealth that they can leap out and do something without taking a huge risk.

2. In a previous interview, you said the Colorado Springs region is a "perfect laboratory for experiments in new venture creation." Why is it perfect and how will students benefit?

I think primarily it is because the environment is so pristine here. Anybody that goes out and creates the next "whatever" has the opportunity to control market space because there's not a whole lot of competition. In the Silicon Valley, for instance, you're going to be up against a thousand others looking for the same dollars, so it's very difficult to innovate and find a niche. But not so much here. Just imagine 40 to 50 new people coming out every year who say, "What can I do to create a job for myself?," rather thanÂ  say, "Hey, hire me."

I arm my students not to become entrepreneurs necessarily on the day they graduate, but to look for entrepreneurial opportunities throughout their lives. It's quite all right to be employed for a while as you accumulate wealth so that you can reduce the risk to yourself and your family. I link entrepreneurship to life, not just to starting a venture. The skills apply across the board, whether you're in the corporate environment or the home environment. It's problem solving, problem identification and the ability to take action.

Business education in general focuses on preparing students for taking action in the corporate environment. But entrepreneurship reminds you of what business is all about. One of the things I've always harped about is we don't know what the purpose of business truly is; we kind of lose track of it. Some might say it's to maximize shareholder wealth or maximize profits. But the fundamental purpose is to create value. Nothing else matters. As an entrepreneur, you know that if you don't create value, you are not going to eat. In a big company, you get a paycheck but you don't even know why you are there. The fundamental purpose of business is critical for success – for the individual entrepreneur and the economy.

3. You've written 12 books. What's the writing process like for you?

It's pretty simple. One rule I follow is that you write every day. A commercial book is going to be about 45,000 words while a textbook is 180,000 words. You can't write a textbook in one sitting, so you break it into manageable chunks. When I'm writing a textbook, I try to deliver 1,000 words a day. For a 45,000-word book, that's a month and a half. As the book matures, I set an hourly goal because sometimes you have to massage some footnotes and things like that. It's tedious and horrible work, but you have to do it.

The second rule: When you write, just write, don't edit. People get hamstrung because they edit while they write. You'll never get 1,000 words put down if you're looking at each one or if you're worried that Microsoft Word has put a green line under your sentences. People think it's glamorous, writing a book, but it's like bricklaying: It's miserable work, brick by brick, but when it's done, it's great.

Ideas come from many places. When we came out of the e-learning company that didn't work, we had 40 engineers that were part of our programming team. Jack Ivancevich was a partner with me and we realized that managing these nut-job engineers wasn't easy – they're different animals. So I said, let's write a book about it, and we'll call it "Herding Nerds." We put a proposal together and sent it off to McGraw-Hill. They loved it and changed the name to "Managing Einsteins." The trade book got up to No. 100 on the Amazon list. We created this iconic engineer with traits that were sort of stereotypical, but were the things we experienced. Engineers are independent, a little bit asocial, a little bit disorganized and they're motivated by different things than other people. We hired a cartoonist to do illustrations. It was a big hit and a fun book to do.

Now I'm writing a book I call "Simple Rules for Life's Economic Game." I believe that everyone needs a rulebook for how to manage their economic life. Young people go out and make the same mistakes over and over again: They get extended on credit cards and they give their money to somebody who shouldn't get that money.

4. Can you point to a favorite accomplishment, either personal or work-related?

There are lots of them. The books are pretty cool. In the past five years, the thing I'm most proud of is I started an angel investing group in Arizona – Arizona Technology Investor Forum – that became the premier angel investing group in the entire state within a year and a half of the founding. I'm proud of the India company, too. I started the thing via Skype. I had a great partner on the ground. He wanted to start a company so I was finding business here in the U.S. and sending it to India via the Internet. They would process the work there and send it back to me. We do editorial work. It was acquired in 2008 by a Dallas company, so now I'm primarily a shareholder. But it continues to grow and I take a lot of satisfaction from that.

5. Are there great entrepreneurs who students should model themselves after? Why?

I'm not a big believer in icons. Everyone has to be an entrepreneur in their own way. The great question is, are entrepreneurs made or born? And the answer is, "yes." Everybody's born with a certain set of skills and talents. Some are born with talents that are more predisposed toward success as an entrepreneur. But even if you don't have a heaping helping of natural gifts, you can develop what you have. You can be as successful as anyone else with a little bit of luck. I've never been lucky; I'm a grinder. But I enjoy it just as much as somebody who has a hundred million in the bank. I like being around it; I like the freshness of it.

Send your thoughts and suggestions for the Newsletter.
END_OF_DOCUMENT_TOKEN_TO_BE_REPLACED