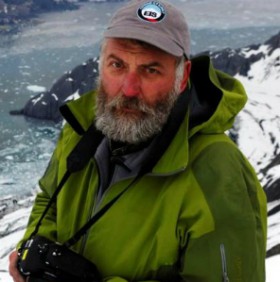 A love of snow, ice and cold weather has become for Tad Pfeffer a lifelong passion to help the world understand the transformation of glaciers and the implications of those changes.

For 30 years he's studied the mechanics of how glaciers move and change in response to climate, using physics, math and engineering. He's a professor of civil, environmental and architectural engineering at the University of Colorado at Boulder, and a fellow of the Institute of Arctic and Alpine Research (INSTAAR), one of several university research organizations.

Much of his focus has been on Columbia Glacier on the southern coast of Alaska in Prince William Sound. He's watched the glacier rapidly lose ice, calving icebergs into the ocean, events that contribute to the rise of the sea level. His 2007 book, "The Opening of a New Landscape: Columbia Glacier at Mid-Retreat," is a photographic record of the glacial changes.

He also has spent a little time proving a less serious ice issue — that ski moguls don't stand still.
For both studies, he relied on time-lapse photography and photogrammetry, a process that uses photography to measure changes in objects. This marriage of science and photography also helped him and fellow researcher Jim Balog, a CU alumnus, communicate to the public through initial studies of the Extreme Ice Survey the dramatic changes happening to glaciers.

The mogul study found that "bumps" created by skiers migrate uphill. How did you study the moguls and what did you find?
Dave Bahr, a Regis University professor, and I have skied for many years and we thought that moguls moved uphill. We started the study about five years ago, for two seasons at Winter Park. We mounted a camera on a building at the base lodge, and used ground controls for references. We used a Nikon with a timer, shooting every hour during the daylight.

If you let skiers go down a slope that is not prepared, the skiers will form a pattern in just a few hours. (As the skiers turn, the snow they scrape on the downhill side of the mogul is pushed to the uphill side of another mogul. Thus the upward migration.)

The size of the bumps — the structure and spacing — is determined by our size and the way the skis work.

2. Why did you choose to study Alaska glaciers and what have you found?
I've worked in Antarctica, Greenland, Canada and Kilimanjaro ... but I was a grad student in Seattle and was familiar with Alaska. There's an enormous amount of interest in Greenland and Antarctica, but actually most of the new water adding to sea-level rise is coming from other glaciers and ice caps, including those in Alaska. Sea level is also raised by expansion of warming ocean water. Not many people are working on glacier losses outside the two big ice sheets, so it's very important to know what's going on there.

Glaciers all over Alaska are changing, shrinking. We're putting about 880 gigatons of water into the ocean per year in terms of sea-level rise. (A gigaton is equal to 1 billion tons.) That equates to about 2.4 millimeters (about one-tenth of an inch) per year. About one-eighth of that comes from Alaska.

Columbia (the glacier) started changing dynamically about 25 years ago, losing ice about 20 times faster than it would by melting. A project was in place to study it, started by Mark Meier, who came to INSTAAR, and the whole purpose was to predict and understand this rapid flow of ice.

The climate didn't suddenly get warmer. Gradual warming and gradual thinning of the glacier has pushed it over the threshold. That's the same thing we're seeing now in Greenland.

3. How much time do you spend in Alaska and how do you measure the glacial changes?
I usually spend one or two weeks at the beginning of the summer and one or two weeks at the end. The glacier is so crevassed, we can't do much on the glacier itself. You have to take a helicopter and hang out the side to set an instrument down. (The surface) is too broken up to be safe. So we're forced to do a lot of automated study. We stay long enough to do things that require our presence. It's very productive to spend time just watching and thinking about what's going on. We have a weather station there that sends data by satellite and we use both cameras and a seismometer. The seismometer gathers lots of data ... about 100 times a second ... so it stores the data until we can go up there and swap it out.

4. Currently, where has your research taken you?
The bulk of my time in the past year has been spent considering the global sea level and realistic projections. The popular press refers to very dramatic events. (For instance, some studies predict the collapse of the West Antarctic Ice Sheet would cause the sea level to rise an average of 17 feet around the world, wiping out most coastal areas.) But what is not talked about is actual probabilities. The collapse of the West Antarctic probably would take 1,000 years to get going. But policy makers and planners don't really care about 500 years from now. They want to know what's going to happen in 5 years, 10 years, 20 years.

A lot of glaciology is not really aimed at that time scale. I've been trying to get a handle on the uncertainty of what's happening right now. Uncertainties are out there, but they are not quantified in any organized way.

This is no longer a pure science activity. When I started 30 years ago, no one really needed to know what was going on. Now, it's an applied science. Specific questions have to be answered in a specific amount of time. We have to shift gears and start focusing on solving the problems that are motivating interest in this now.

5. What do you want students to take away from the classes you teach at the university?
It would be having an in-depth, skilled technical knowledge that engineers tend to focus on, combined with the awareness of context of that knowledge.

In my engineering geology class, the students actually go outside and look at the ground and learn a great deal about the properties of rocks and soil. I'm making people aware of their surroundings.

Send your thoughts and suggestions for the Newsletter.
END_OF_DOCUMENT_TOKEN_TO_BE_REPLACED