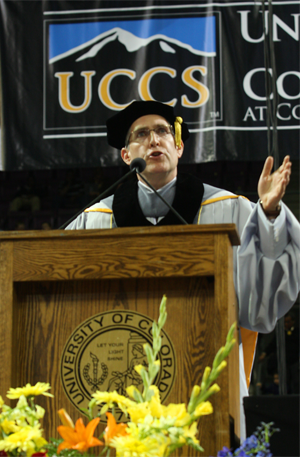 Ludwig in his commencement regalia as a member of the Board of Regents.

The upcoming COLTT (Colorado Learning and Teaching with Technology) Conference promises dozens of presentations and workshops from professionals with credentials in academia and scientific applications. Someone participating in the intersection of those worlds at CU is Regent Stephen Ludwig, who will give the keynote at COLTT, set for Aug. 7 and 8 on the University of Colorado Boulder campus.

A Denver Democrat in an at-large seat, Ludwig has served on the board since 2007. He led the effort for a new guaranteed admissions program across CU, and served as vice chair of the Board of Regents in 2010-11. He began serving his second six-year term in January after re-election last fall; that campaign took him to all 64 counties in the state over a 10-day span.

Ludwig is global marketing and communications manager at CH2M HILL, a Fortune 500 engineering and construction company headquartered in Englewood. “We have $6.4 billion in annual revenue and about 28,000 people across the globe,” he said. “I’m the global marketing and communications manager for a 6,000 person business unit with $1 billion in revenue. I deal with people in Abu Dhabi, India, Argentina, Brazil, Mexico, Alaska, Canada, Russia.”

A graduate of the University of Colorado Colorado Springs, he also has worked as a journalist; now, as a regent, it’s not uncommon for him to be on the other side of the microphone or notebook. “I have a great respect for journalists. While I might not always agree with their story angle, I understand that they’re doing their job,” Ludwig said. “I wish there were more journalists covering higher education because it’s so important to the state.”

When he’s not busy with career or board responsibilities, Ludwig enjoys reading and road biking. He’s also a big fan of “Doctor Who,” the British sci-fi character surrounded by technology.

1.What are some of the challenges and benefits you experience from working with technology in your career and in your role as a regent?

The challenge for a guy like me – I’m 45, I’ll be 46 in September –  is my professional life started at that transition stage from right before technology became as prevalent as it is today. I still struggle with getting beyond basic functionality of highly sophisticated software. Or even Microsoft Outlook. I’ve been using it for 20 years and I’m still figuring out functionality on the thing.

As for benefits, the board started doing some video conferencing over iPads. It’s highly efficient, a way to save money and we still get some of the interpersonal contact. There’s a way we can use technology to help us save time and money, but not lose the human touch.

When I look at the university, there are pockets of excellence in how we are figuring out how to deliver online content successfully. That has a huge implication for the university, but also for the state and our students. UCCS recently started offering four degrees where you can take the first two years at a community college in southern Colorado and the last two years at UCCS via Cisco Telepresence. If you’ve ever seen that technology, after awhile you forget you’re not in the classroom with the professor and other students.

2. CU-Boulder will have its first MOOCs launching this fall. The board has actively been involved with the development of CU’s systemwide relationship with Coursera. How do you see this technology evolving, and what might that mean for CU?

When Kathleen Bollard, our vice president for academic affairs and research, gave a presentation on MOOCs to the board, I felt like I owned a railroad and I just saw a jet airplane take off for the first time. If you look at the newspaper business, the book business, and other industries, they were certain they would never be disrupted, because they had a long and proud history. People who were comfortable got caught off guard by technology. It had really amazing consequences, good and bad.

In higher education, I would suggest that we don’t know what impact MOOCs and other technological advances are going to have. But if we assume that we can continue to operate the way we’ve always operated because we’re comfortable, then we will be in a world of hurt.

One of the things I’m concerned about, and I’ll bring this up at COLTT, is that we confuse tradition with mission. Our mission is to be public educators, to generate and transmit knowledge in an effort to serve others. And we have to take advantage of every way that we can to do that effectively.

The skill set to get your Ph.D. is very specific. You have to be passionate about your subject, otherwise you would not survive graduate school. To become a tenured professor takes another skill set – tenacity, brilliance, a mastery of language that is highly specified and mastery of incredibly complex details – that we’re very thankful for. Is it fair for me to assume that you’re going to be able to take all that and translate it into something consumable online? Am I asking a race car driver to fly a jet airplane? So I wouldn’t be surprised if someday in the near future we have assigned to professors, instead of a graduate assistant teacher, a graduate assistant content delivery expert.

3. How has your second term on the Board of Regents differed from your first? 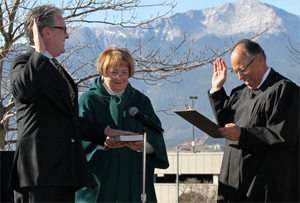 There’s a shorthand that I have available now after six and a half years, meaning I understand our processes far better, our budgeting process, the players, the missions, the unique roles of each campus. And so that helps get through things more quickly.

We have a few very, very large issues and a lot of small ones. I’ve learned to let the smaller ones go and try to focus on the really big issues. No. 1, of course, is funding. More specifically, funding and structure. This isn’t limited to the University of Colorado. The costs of higher education are growing exponentially, so if we simply were to throw a little more money at it, I still don’t think we’d be able to keep tuition affordable and meet public demand. How do we do what we do smarter without losing what’s best about our enterprise, or higher education in general? It’s a tricky balance and a hard conversation.

4. What are some of the ways you interact with CU faculty and staff members?

I have some assumptions about why that is. There are two roles for a regent: One, I’m on the board of directors for an institution; two, I’m an elected official. Is it appropriate for someone to contact a member of a board of directors for an organization directly? Maybe not. However, it’s always appropriate for someone to contact an elected official. So there’s that tension there.

I’m working with a group of faculty including folks from UCCS and CU Denver on a symposium for 100 faculty from public two-year and four-year schools all over Colorado. We’re putting on a daylong event, probably in the spring of 2014. The first half of the day, we want to ask, what incentives or structures do you need to increase cooperation among the faculty across institutions? The second half of the day is, if you could create a higher education system from scratch to serve Colorado today, what characteristics would it have? Out of that discussion, the hope is that a working group will carry those ideas forward to university administrators, presidents, the Department of Higher Education and lawmakers.

Our partner is the Public Education Business Coalition, which is a nonprofit. It’s not a CU event, so why is a CU regent doing it? Well, I’m a public servant. This is a conversation we need to have. If we engage faculty, we might come up with some really new, interesting ideas – things we haven’t thought of. What would it take for a professor from UCCS to work with a professor from UNC? Or someone from Colorado Mountain College to work with someone from CU-Boulder? There are pockets of great examples, but not a lot of them.

5. What’s your best memory of being a student at UCCS? 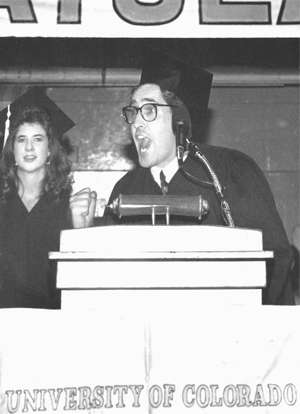 Stephen Ludwig delivers a commencement speech at the University of Colorado Colorado Springs in May 1992, a year before his own graduation from the university. (Courtesy Stephen Ludwig)

Graduation day. I never thought I was going to graduate from college. I was almost 26; it took me nine years of life. On May 21, 1993, when they called my name, I had this huge adrenaline rush. It really was the happiest day of my life. It was such a powerful experience. That’s one of the reasons why I’m on the board – I want other people to get what I have gotten.

And it’s really a joy for me that my faculty thesis adviser and other professors of mine are still on faculty – Chancellor Shockley was a professor of mine. It’s also an honor to be the first UCCS graduate to serve on the Board of Regents.

Tagged with:
Board of Regents, COLTT, Ludwig