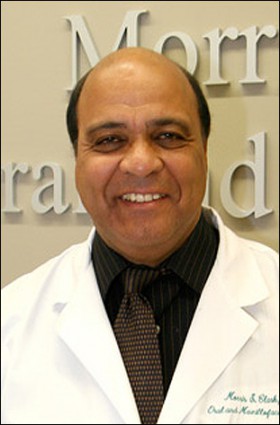 Morris Clark, D.D.S., grew up in the small, rural town of Princeton, W.Va., where access to dental health care was not readily available. People turned to all types of home remedies to relieve their pain.

"Watching people suffer and trying to help themselves made me interested in becoming a dentist," he says.

After finishing graduate school at Columbia University and serving as assistant director of an Upward Bound program, Clark was recruited by the University of Colorado in 1981. He loved the campus environment and also was swayed by the School of Dental Medicine's reputation. He currently is a professor of oral and maxillofacial surgery and director of anesthesia, with research interests that include pain management.

Through a graduate student at the school, he became connected with Apollonia University in Romania, where sedation alternatives are limited. He recently returned from a visit to the university where he presented a series of lectures on sedation.

1. While you were in Romania in April, a clinic was named in your honor. Did you realize this was going to happen?

I had no idea the clinic was going to be named after me until well after I arrived. The clinic – The Morris S. Clark Clinic of Narcosedation – is within the walls of the University of Apollonia in Iasi, Romania, and has been operating as a general dental clinic. The patients come from all walks of life. The president of the university, Dr. Vasile Burlui, who is a pre-eminent scholar, physician and dentist, presided over the ceremony along with other officials. The ceremony was quite a moving experience. Narcosedation is a term coined to describe a sedation technique that utilized synthetic opiods and barbiturates. Barbiturates are no longer manufactured in the United States. It is used in Romania to control pain and anxiety, but there are better alternatives. 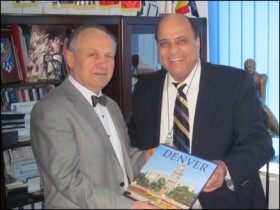 Morris Clark, right, with Vasile Burlui, president of the University of Apollonia in Romania, where a clinic was named after Clark last month.

2. You mentioned that you learned a great deal about how pain care is delivered in an Eastern Bloc country. How does it differ from what we're used to in the United States?

There is a clear difference in technology and equipment available to students and practitioners in Romania as opposed to our abundant availability of technology and equipment. In the past in Romania, there does not seem to have been a lot of emphasis on pain control in the delivery of dental care. Nitrous oxide, for example, was used very little in any part of Romania. In the United States, a majority of dentists and an overwhelming majority of pediatric dentists use nitrous oxide as a necessary and integral part of their treatment plan. I was very impressed at how receptive the Romania faculty and students were to nitrous oxide as a safe and effective dental anesthetic.

I became interested in pain management not only from my own early childhood experiences, but later as an oral and maxillofacial surgeon. I saw how drugs were evolving for sedation as well as pain relief. I was one of the original investigators to clinically evaluate midazolam (Versed) and flumazenil (Romazicon) (to replace) valium as an ambulatory sedative agent.

Great changes have taken place in dentistry over the years – from how patients receive their care to insurance benefits to improved techniques such as dental implants to overall integration with medicine. Most important is the fact that dentistry today is or should be virtually pain free. 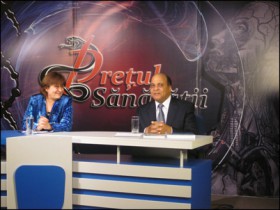 While in Romania in April, Morris Clark appeared on television to discuss the country's advancement in dental treatment.

4. What types of projects or research are you currently working on?

I am working on a textbook that I think will be of great use to the medical and dental professions. I also am involved in the development of a new delivery system for a local anesthetic that will be absolutely revolutionary. Course and curricula development at the school also is important for keeping our students academically current.

5. What aspect of your work do you enjoy most?

I enjoy teaching, particularly when I can assist in efforts that have a humanitarian aspect. I always tell my students that anyone can be a philanthropist by simply donating time to a worthwhile project. However, our most noble goal as professionals is to eliminate pain in our fellow humans.

Send your thoughts and suggestions for the Newsletter.
END_OF_DOCUMENT_TOKEN_TO_BE_REPLACED