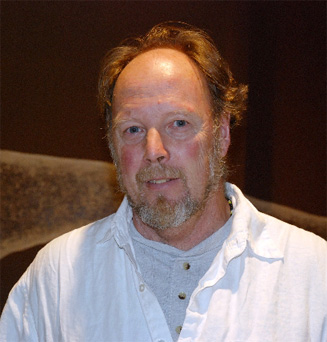 It began with a few tracks in a coal mine near Gunnison. They weren’t just any tracks; they were impressions left in the earth by dinosaurs millions of years ago. In the early 1980s, there was very little serious literature written about the subject of ancient tracks. So after Martin Lockley and one of his students documented the site and wrote a short paper on the “discovery,” they became “instant experts.”

Lockley had been hired to teach geology at the University of Colorado Denver in 1980, but his interests lay in paleontology, specifically in the area of early marine fossils, which he had studied during doctoral and post-doctoral work in Wales. He soon realized he wouldn’t be able to continue his work with marine fossils; the nearest sites were in Utah and Nevada. But the student’s suggestion to look at dinosaur tracks was fortuitous. 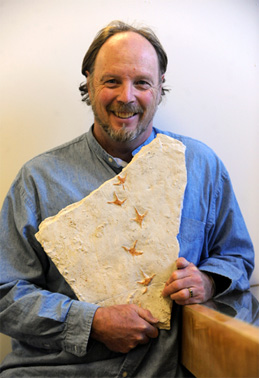 “People said we were clever to pick this neglected area (of study), to make it my own, but I always tell them that we fell into it. There were other people who studied dinosaur tracks before, but they were few and far between and some of them had been dead for a couple of generations,” Lockley said. “I wasn’t intending to make (dinosaur tracks) a major area of specialization, but we became instant experts so we took the ball and ran with it.”

Lockley’s nearly overnight fame has not waned in the ensuing years. He is a world expert in the fields of paleontology, geology and evolution, and is one of only a few dinosaur track specialists in the United States. He is the first and only director of the Dinosaur Tracks Museum at CU Denver and is overseeing the transfer of the collection – some 2,700 specimens from 24 different countries – to the University of Colorado Museum of Natural History at CU-Boulder. The move was necessitated by his announced retirement in 2010. He has written hundreds of books and papers and has traveled the world to research track sites, studying not only dinosaur prints but those of pterosaurs and birds, ancient mammals and even hominids.

1. What would you consider some of the highlights of your career?

After the first paper, somebody told us about a site on the Purgatory River in the Las Animas/La Junta area. There had been very obscure, short references in literature about it in the 1930s. The site was very impressive and hard to get to. We spent three or four autumns and winters there, mapping the site. It really was a kind of purgatory because we had to work in quite difficult conditions in winter because in the summer, the water level was too high and it tended to be very hot – 110 degrees – and there were rattlesnakes. Working and camping in the winter, we literally spent 20 long weekends there, so it was like 40 days and 40 nights in purgatory. It turned out to be one of the largest fossil footprint sites in North America. That really set us on our way to specializing in the study of dinosaur footprints. Coincidentally, a photograph of the site had been published in Life magazine, of all things, in Volume 1. We published a fairly comprehensive piece with a map of the huge area, with more than 1,300 footprints, in the Geological Society of America Bulletin in 1986, on the 50th anniversary of the first reference to the site.

Another memorable chapter in the history of our Dinosaur Tracks Research Group was in late 1988-89. We began to realize that, near Dinosaur Ridge, you could trace the track-bearing layers a long way north and south, all the way to New Mexico, and we began to call this the Dinosaur Freeway. It represented the ancient Gulf of Mexico, where the sea came into Colorado and Denver was beachfront property 100 million years ago. This was a new phenomenon, to realize that some of the track-bearing rock formations or layers went on for hundreds of miles. We started a nonprofit organization, Friends of Dinosaur Ridge, and since then the area has developed into a major paleontological attraction. More than 100,000 people visit every year. CU Denver has been a partner with Dinosaur Ridge since its inception. 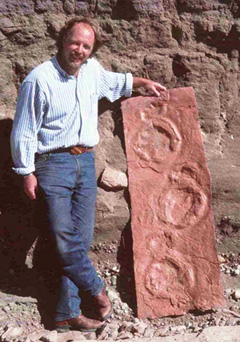 In the early ’90s, when the collection was starting to grow, we had a lab off campus that we funded ourselves. Because you can’t cut tracks out of rock – you’d end up with slabs that weighed 5-10 tons – we began making molds and replicas. We made up a couple of traveling exhibits; the first people to show an interest were the Japanese. That got the attention of our administration and encouraged them to create the Dinosaur Tracks Museum. From 1991-97, the exhibit went to 27 different locations covering three continents and seven countries. Literally millions of people saw it abroad, compared to a relatively small number of people who saw it in Colorado or on the CU campus.

Another landmark was in the mid-‘90s when we began to broaden our studies to look at tracks of pterosaurs – flying reptiles – and other things, such as mammals from after the age of dinosaurs. And from 2005 to the present, we’ve become quite involved in studying ancient human footprints, so we’ve really covered the whole spectrum.

2. Why is the Dinosaur Tracks Museum collection moving to Boulder from Denver?

I was hired as a geologist when CU Denver had a Geology Department. In the 1980s, the University of Colorado Museum of Natural History wasn’t interested in being the repository for what we were collecting. In the middle of my career, CU Denver decided to create the museum. My job description was changed and I began to wear a second hat as the director of the museum. That meant I spent less time teaching and more time curating. But in 2004, we lost our geology degree program. The writing was on the wall and we had to find a permanent home for the collection. Jump ahead to 2008 when the new director of the museum, Pat Kociolek, came on board. He expressed an interest in taking the collection when I retired. I already had made arrangements with CU Denver to retire in 2010, so we decided the collection would be transferred to the museum in Boulder. The transfer is being facilitated by a substantial grant from the National Science Foundation (NSF), which previously funded a significant part of the CU Denver research that helped get the collections started in the 1980s and 1990s.

3. Dinosaur tracks can show migration patterns and population trends. What else can they tell you?

When I started out in the field, people would say that dinosaur tracks were so rare, they were useless because you couldn’t get much information from them. They said tracks weren’t the real thing; bones were the real thing. But people who study tracks have completely turned that on its head because we’ve been finding sites with thousands and thousands of footprints. If you stand on top of one of Denver’s skyscrapers, you can point out dozens of sites along the Front Range. One of my favorite ways to tease my colleagues is to say that people who study bones are studying death and decay, whereas we’re studying vibrant, living, athletic, dynamic animals. There’s a lot you can learn about behavior, for instance.

Thirty years ago, there wasn’t a single dinosaur egg or nest that was found where you could identify who laid the eggs because embryos were so small and the bones were tiny and fragile. But the field of egg research has developed little by little. I’m working on manuscript at the moment concerning findings from Korea where we have tracks of dinosaurs that are 1 centimeter long. That’s less than 1 / 2 -inch long and they probably stood no more than 2 inches at the hip. These animals hatched out of an egg that was no bigger than a sparrow’s egg – no bigger than a chocolate-covered peanut. I don’t think there is any actual egg or bone evidence for dinosaurs that small, but tracks tell us we have hundreds of them running around in the same locality, so it probably was a nesting site. We don’t know how big they got – the size of a crow or the size of an ostrich – but the tracks are useful for population studies.

I tease my friends that we name a new species on the basis of its bones, even though it may be represented by one incomplete skeleton or a few different bones. We find track ways representing hundreds of animals. At some sites, there are 5,000 footprints, so that’s a lot of data that tells us about size, direction they were going, the different proportion of herbivores vs. carnivores, and three, four, five or six species represented. You don’t get that from digging up half a dinosaur carcass.

We’re in the preservation business, so from the first photograph or the first measurement, we’re really starting the process of preserving information. At a typical site, the first thing we do is make a map. Then we make simple tracings of outlines of individual tracks on transparent paper so we can compare them. Then we make rubber molds, which is a minimally invasive technique. We take the rubber molds back to the lab and make hard copies – replicas. And what’s happening more these days is a technique where you take a series of overlapping photos of the same footprint with scale bars as your fixed marker points and feed those into software programs for three-dimensional imaging.

Beyond that, apart from writing up results, we have to work with land management agencies to come up with strategies or recommendations to preserve these sites and decide whether to excavate them further or cover them up. When you dig up bones, you leave a hole in the ground and don’t have to worry too much about protecting the site. There may still be other stuff in the ground, but it will be safe because it’s buried. But the ancient surfaces we map and document – often the top surfaces of rock strata – have to be incorporated into the modern landscape, so every site creates a conservation issue. We’ve been trying to get some spectacular sites onto the UNESCO World Heritage list or create special areas like state parks or national parks.

5. What will you do when your retirement is official?

I officially retired from my tenure-track position in 2010, but was reappointed for two years to continue coordinating the transfer of collections within the CU system. When that temporary appointment is completed next year, I will still have some funded projects that are ongoing, so I’m in a phased retirement. I have several book projects that are already under way, but have been put on the back burner.  I really need to get back to them because they’re the other string to my bow. They look at the much broader areas of history and philosophy of science. I want to finish the five or six manuscripts that are between 50 percent and 90 percent done before I get too ancient.

Studying fossil footprints has been a fascinating journey. They’ve been good to me in so many ways. It’s not really work for me. The administrative work and the paperwork gets to be a bit much at times, but once you get rid of that, you say, "Oh, great" – I can get back and do some fun science or get in the field or go somewhere interesting or collaborate with someone on new discoveries.