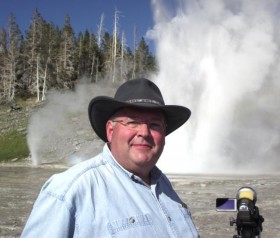 While vacationing, Faculty Council Chair Mark Malone keeps an HD video camera handy for explorations
at such national parks as Yellowstone, with its Riverside Geyser.

"On our campus, we have excellent relationships between faculty and administration. People see that and they want to be part of it," he said. "I became chair of our campus EPUS (Educational Policy and University Standards) committee while I was still an assistant professor, and probably had no business doing it."

Clearly, he did, because he's now beginning his second stint as chair of the systemwide Faculty Council, a sequel to his 2002-2004 term. It's his latest role in the CU system, which he first joined when earning his Ph.D. at CU-Boulder. He puts it to use as a professor of science education at UCCS.

1. What will you take from your first experience as Faculty Council chair into your new term?

When I entered this position eight years ago, nobody knew who Ward Churchill was, nobody had heard much about the football crisis. We were in post-9/11 budget decline. I couldn't have predicted any of those big things. I'm coming into this knowing that most of what I'm going to be dealing with in the next two years, I have no idea what it'll be – other than the budget. The budget has been ongoing, it's a serious issue, it affects people's lives and their families.

I've chaired EPUS on my campus, I've chaired the system budget committee and others. From all those things, you learn you've got to stay flexible and responsive.

Malone and his wife, Sue,
pose in front of a giant sequoia. [Photos courtesy Mark Malone]

Malone and his wife, Sue,pose in front of a giant sequoia. [Photos courtesy Mark Malone]

2. You mentioned the budget climate. With state funding on the decline, what role do you and the Faculty Council play in coping with such a challenging economic environment?

It's going to be a lot of what we do. It has to be. The budget picture is certainly a little bleak. We're going to have to make choices, and there will have to be trade-offs. In the course of doing that, you try to minimize the problems. You try to make sure that if you cut something that you're not cutting where it does serious damage – and that you have lots of input from everyone involved.

When we went through the post-9/11 budget downturn – which was not as bad as this, but felt bad at the time – we changed retirement policy to increase options for faculty. ... We changed the rules for program discontinuance so that we could avoid laying off the people who wanted to keep working, and provide other opportunities for people who were near the end of their careers.

The Faculty Council's real strength is that we have eight committees, so you can break down what's happening – a proposal to cut something, for example – in ways that get input from everybody involved.

3. You teach science education. Based on your interaction with potential educators, what's your take on how they'll approach the work of teaching in the future?

The teachers that I have contact with know that, yes, you have to steer toward things that can be measured, but don't spend your whole day doing that. Save time for the human factors of rational thought, problem-solving, looking at the world based on what you can interpret, making decisions in the face of ambiguity. How you measure that on a CSAP test, I don't know.

4. You received your Ph.D. from CU-Boulder before going on to become a faculty member at UCCS. What do you like best about both those campuses?

The best thing about our campus is small class size. We've designed our campus and buildings around smaller class sizes, which is a plus. My son is a sophomore at Boulder, and the bulk of his classes freshman year were in 200-student auditoriums. When I started here, the average student age was 35 and now it's close to early 20s. The character of the campus changed almost overnight when we started building dorms.

Boulder is the big university research campus. Both my sons (Emmett, 27, and Cullen, 19) went there. Nothing against the Springs campus; I think teenage boys need a place where they can go and be 100 miles away from Dad. People sometimes complain about ... the progressive attitudes in the Boulder area. After my sons had been living in Colorado Springs for 18 years, they needed some contrast in their life, and I wanted to be sure they had it.

5. How do you enjoy spending your leisure time?

During summers, my wife, Sue, and I try to spend as many weeks as we can in national parks, camping. This summer was Yosemite, Sequoia and Yellowstone. Spring break was in Zion. I used to have a motor home that was 17,500 pounds; now I have a Trail Manor camper that's only 2,900 pounds. I have an HD video camera, and one of my ongoing activities in the summer is filming various features in Yellowstone and other national parks. A lot of these things are family activities – my boys still go camping with me.

The other thing we all share is movies. I survived small-town life in Pennsylvania as a boy by escaping to the movies twice a week. I've got a whole shelf full of my favorite movies, but some of them are "Joe Vs. the Volcano," "Made in Heaven," "Defending Your Life," "It's a Wonderful Life" and "Stranger Than Fiction."

Send your thoughts and suggestions for the Newsletter.
END_OF_DOCUMENT_TOKEN_TO_BE_REPLACED