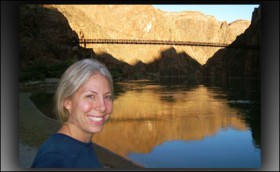 Imagine stepping off a plane in a strange, unfamiliar country, then going through the maze of university enrollment, all the while trying to find employment, an apartment, friends, a grocery store, something that reminded you of home. Who could you turn to? At the University of Colorado Denver, you would seek out Laura Welch and her staff at International Student and Scholar Services (ISSS). Welch's title is director, though she teasingly refers to herself as "jack of all trades, master of none." While she creates policies and streamlines practices to keep the program running smoothly, her main task is to help ensure international students and scholars fully experience the university, the city of Denver and their home-away-from-home in the U.S.

In the decade between ages 20 and 30, she says, Welch wandered the world as a Peace Corps volunteer in West Africa and as an English teacher in Slovakia and Japan. After deciding she needed a little more structure, she realized she could pursue a career in her interests, and earned a master's degree in international and intercultural management. Seven years ago, she was hired as a student adviser at CU, became assistant director of ISSS and, a year-and-a-half ago, became the program's director.

We are the liaison for all aspects of international students' and scholars' university experience. We are the first people they meet. ISSS conducts an orientation and we help them get settled in their first few weeks in the country and in the university. We usually try to do a few events every year. Last summer, one of my advisers took students to a Rockies game. They sat in the Rockpile, ordered hot dogs and bought trinkets. All the while, they were asking questions: "Why are people cheering now?" "Why did that man run?" My adviser said it was one of the best experiences she'd ever had.

We try to encourage the students to get involved in student government and international groups, to make American friends, and volunteer in the community. We have an e-newsletter that offers cultural and immigration tips and events updates, and we give them a little bit of Americana. Like the Rockies, or one adviser got students interested in Halloween. Another time we had an Easter egg party where we dyed eggs. Afterward, the students wanted to know what you did with the eggs. Well, you eat them. We're also very mindful of others' holidays like Ramadan for Muslim students. We adjust to their needs. And sometimes we attend their events, like Chinese New Year or the Indian Festival of Lights. We want to transition them to a lot of types of cultures they may not be exposed to.

There is constant outreach, and we continually find ways to connect with the student.

Once I had a Muslim student come to me and say he needed to kill a sheep. What he really wanted was a butcher so he could buy meat to celebrate Eid, a holiday that celebrates the end of Ramadan.

At first I didn't understand him. "You need to find a ship?"

So I told him where he could get what he needed. And he said, "I don't need to find a ship to get there, do I?"

Another person asked whether he should take a job in Grand County. I encouraged him. He was working on plans for a community library. He also found out what it's really like to work in America and what it's like to go bowling every Friday night. Then he came to me and asked if he should take a job in Rome. He said he didn't like spaghetti. I advised him to go there and told him there was a lot more to Rome than spaghetti.

Later, he told me that because he had believed in what I had told him, he had gotten one of the best jobs in Denver.

It's all about getting them to leave their comfort zones and providing them with another step and another step.

2. How many students and scholars do you serve and where do most come from?

We have between 600 and 700 students on both campuses. At the downtown Denver campus, the largest populations are from China, India, South Korea and the Middle East. At the Anschutz campus, most are from China and India.

We have scholars from all over the world: Some are researching, some are teaching, and some are employees of the university. They want to come to Anschutz because of the research opportunities. The School of Public Affairs attracts a lot of Korean officials. UC Denver is their No. 1 choice and that speaks volumes for all of our departments who host these individuals. People really enjoy their time here and enjoy the opportunities the university and community are offering them.

3. What is the most satisfying thing about your job? What would you change about it if you could?

I've got the best job. It's so much fun to watch (the students) in their final semester. A lot of them choose to remain in the U.S. to work one more year, which is a benefit of their status, and I help them with that. The graduation ceremony really is important to them, not unlike our first-generation students. They feel a pride in walking across the stage. And the pride their families are feeling means a lot. Many families are paying all the bills because the students receive no financial aid and almost no scholarships are available for them. The families must sacrifice a lot. The look on the students' faces is almost indescribable: pure joy, pure satisfaction.

One improvement I would love to see would be to stress the importance of intercultural communications and offer that as a service to staff and faculty who would like to have more tips and guidance on how to effectively communicate with these students. I would love to have the time and resources to develop that.

(Faculty and staff) say the ISSS is the place that deals with internationals, but they are, too. They deal with them more than I do.

4. What's it like to have the same name as the former first lady? Has anyone ever confused you for Laura (Welch) Bush?

I was once mistaken for her. People Google me all the time and say, did you know ...? I was going to a professional conference where we had roommates. A week before the conference, you get the name of your roommate. She had Googled me, and the first thing she said to me when I met her was, "You know that you have the same name as Laura Bush?" I don't think she really expected Laura Bush would be her roommate, but then she said, "You two have nothing in common."

My students/scholars also like my maiden name, Potter, because it reminds them of Harry Potter.
In Slovakia, you go by your last name, and they add "ova" to the end to signify the female gender. So I was Potterova. I miss being called that.

Names are very important, culturally. My Indian students always say "respected sirs," and I try to say, no, that's not right ... but it's OK.

5. How do you spend your time outside of work?

I recently got married and we have a 20-year-old house we're fixing up. In order to get through all these projects, we attempt to figure out what HGTV show we embody at the moment ... "Design on a Dime"? "Curb Appeal"?

We also get out and hike and explore Colorado and spend time with friends. Saturdays and Sundays are precious days, a time to relax and rejuvenate. When I was growing up, I was taught to explore your own country first, then go international, so it's nice to come back to that later in life. My husband and I are on the hunt for the best breakfast burrito in Colorado. Right now we think it's at the Blue Cow in Morrison. So wherever we find the best burrito will be our favorite spot. We're also looking for the best barbecue and the best homemade ice cream.

Send your thoughts and suggestions for the Newsletter.
END_OF_DOCUMENT_TOKEN_TO_BE_REPLACED