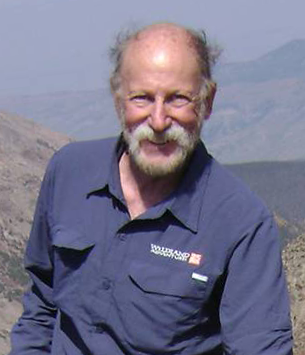 Beam on the summit of Peak X in the Gore Range.

As a child, Kurt Beam wanted to be a scientist. By high school, he knew he wanted independence – wearing a suit every day to an office would not be a fit – and continual intellectual challenges. He winnowed his area of interest down to academics. He was interested in physics, and during his time in college, spent a summer doing interdisciplinary work in physiology. He had found his match. In 2005, the Coloradan left his position at Colorado State University and was hired as a professor at the University of Colorado.

In the lab, the properties of cell communication have intrigued Beam for much of his career. His work has focused on unlocking the mechanisms that cause cells to work normally as well as understanding the mutations that hamper cell signaling and cause disease.

Away from the University of Colorado School of Medicine, he is captivated by the outdoors, from climbing mountains to diving deep blue waters. He has climbed all but four of Colorado’s 14ers, and he jokes that his “numbers are reliable.” In February, he plans to climb Kilimanjaro, Africa’s highest mountain at 19,341 feet. “It’s not technical, it’s just a walk, but it’s a walk up high in the air,” he says.

1. What areas of cell communication do you research?

Much of my research concerns ion channels, which are little valves that open and close and let particular ions move across membranes. This gives cells the ability to signal over long distances electrically. For instance, this is how your brain tells your foot muscles to move. Specifically, I’ve done a lot of work with calcium ion channels that perform some important basic functions like triggering contractions of muscle cells, releasing neurotransmitters and hormones, and are important for the ability to adjust metabolism. So not only am I interested in how these ion channels work but how the signal gets messed up when there are mutations that cause human disease.

2. What have been some of the strides you’ve made in your work over the years? 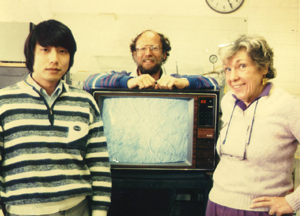 Beam from 1988 with Tsutomu Tanabe and the late Jeanne Powell. The old fashioned monitor shows the first cell that we fixed by replacing the broken gene.

Our work has helped to clearly establish the identity of one protein essential for the ability of the electrical signal to cause muscle cells to contract. And our work showed a new kind of signaling that nobody knew about, what we call retrograde signaling.

One study we did looked at a mouse that loses its ability to move after three weeks. Essentially, genes make proteins but sometimes you have what is called a null mutation, and that means the gene is broken so it doesn’t make the appropriate protein. Usually, we have two copies of a gene, so one gene might be fine and make the protein even though the other gene doesn’t do anything. In the case of muscular dystrophy, the important protein, dystrophin, is made on the X chromosome. Women almost never get muscular dystrophy because they have two X chromosome, and usually have at least one normal gene. Men, because they have an X chromosome and a Y chromosome, have the disease if the mutation is on the X chromosome.

The same goes for the mice. If they have one normal copy of the gene, they would be fine. I first read about the mice in a paper in 1983. I reached the conclusion that they were missing a calcium current, which is what comes from the calcium channel. We confirmed my conclusion, which was the first instance of anyone showing that a mutation could completely wipe out an ion channel in a mammal.

Later, that gene was cloned by Shosaku Numa and Tsutomu Tanabe at Kyoto University. Numa called me and said they wanted to collaborate. We found out the mice we had already worked on had a mutation in the gene, but we could put the gene back into muscle cells and fix it up. So you can repair the muscle cell by putting in an unbroken gene, and that research has set the stage for other research we have done.

3. You recently were involved in a study on Triclosan, an antibacterial chemical widely used in hand soaps, deodorants, mouthwash, toothpaste, and products such as bedding and trash bags. The chemical is widely found in waterways and aquatic organisms ranging from algae to fish to dolphins, as well as in human urine, blood and breast milk. What did your study find?

I have a collaborator at University of California-Davis who has been interested in environmental contaminants. They had done pilot studies with this compound and wanted us to test it on muscle cells. At least in the test tube, it has strikingly bad effects on both cardiac and skeletal muscle cells.

Personally, I’d say there is no clear benefit to having it in soap. For most people, all you need to do is wash your hands with soap and water. Triclosan won’t do anything to viruses because it’s an antibacterial. Using Triclosan causes a massive release into the environment of a chemical we don’t need so it’s not clear why you would do it. Although it’s present in human tissues, it doesn’t seem like its killing people off, because the effective levels aren’t getting that high in people. But the chemical is so powerful, it’s worrisome, and a lot of these things take time before you see what it really is doing to people.

4. What is one achievement of which you are most proud?

There’s one that I find the most entertaining. I’ve always been interested in the outdoors and started going to the mountains as a teen. In 1962, three of us climbed to the top of a mountain in the Gore Range, near Vail. From the best that we could tell, nobody had ever climbed it before so we gave it a name. We called it “The Spider.” (See photo here.)

The name has stuck and it’s on maps so I guess that’s my lasting legacy. The mountain is just under 13,000 feet and is a pretty nice little mountain. The difficulty isn’t just the altitude; it’s what the climb is like. The thing that was fun about it was that we knew absolutely nothing about the mountain then. Now you read a book or go online to find out about a climb. People weren’t climbing very much then. We just wondered if we could get up there.  We named it The Spider because we found giant spider webs at the top, and because of a book, “The White Spider,” that recently come out about the first attempt on the Eiger North Face in the Swiss Alps.

5. What are some favorite items that you keep in your office? 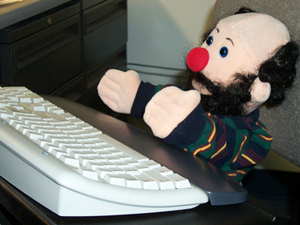 The Beam doll, a gift from a former student.

Of course there are pictures of family. Another thing I like a lot is a wood-block print of a shrine in Kyoto during cherry blossom season that Numa brought me as a present. And a former student gave me a Beam doll that is about 18 inches tall and is dressed the way I would usually dress in a rugby shirt and sandals. The purpose of the Beam doll was that it could go to meetings and be my representative so I didn’t have to go.