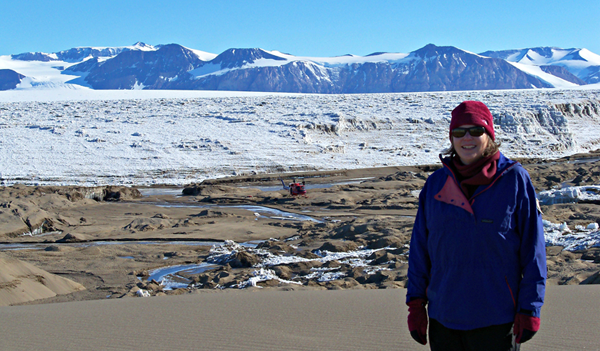 Diane McKnight at Cotton Glacier in the McMurdo Dry Valleys in Antarctica.

Diane McKnight’s research has taken her to some of the most spectacular places on Earth, where she studies relationships between freshwater organisms, trace metals and natural organic material. One year, a student described her travels as “visiting all the ‘A’ places,” when she embarked on field work in Alaska, Antarctica and Africa.

Much of McKnight’s research time has been focused on Antarctica’s McMurdo Dry Valleys Long-Term Ecological Research site, where she is principal investigator, and, closer to home, at the Niwot Ridge Long-Term Ecological Research site. She also has studied mine drainage issues on the Snake River in Summit County. While doing field work at McMurdo one year, her group came across a young Weddell seal that was miles from home. McKnight used the encounter, and the seal’s subsequent rescue, to write a book that teaches young children about the area’s cold desert ecosystem.

After earning her Ph.D. from MIT, she began working for the U.S. Geological Survey and in 1980 studied lakes in the blast zone of Mount St. Helens. During her 17 years with the survey, graduate students from the Colorado School of Mines, the University of Colorado and Colorado State University worked in her lab. At some point, she says, she wanted to devote more time to teaching, and in 1996, she came to CU-Boulder as a professor in civil, environmental and architectural engineering. McKnight also is a Fellow at the Institute of Arctic and Alpine Research (INSTAAR), which she praises for, among other things, providing “a base and framework for interdisciplinary research.”

McKnight has been on sabbatical and returned to her old stomping grounds at the U.S. Geological Survey in Menlo Park, Calif., to work with a former colleague. She also has traveled to Potsdam to attend a workshop focusing on changes in watershed in the boreal zone of the Northern Hemisphere and to work with longtime colleagues in Berlin. Later this summer, she will travel to the Arctic Circle – one “A” place where she’s never been. “The Arctic is changing rapidly, and since my students may decide to be Arctic scientists, I decided to learn more.”

1. What do your studies of Rocky Mountain alpine lakes show and what are the implications?

In a long-term collaborative study, we found that the growth of algae is changing in response to changes in these pristine remote lakes due to nutrient loading and climate change. Nitrogen is carried to the snowpack on upslope winds from the Front Range. When snow melts, that excess nitrogen goes into the lakes quickly and changes which nutrients are most limiting, which in turn has changed the type of algae that exist there. Another trend we’ve seen is due to climate change, which is a global signal. The snowmelt and ice-out of the lake generally are happening earlier by two weeks or so. That’s like turning on the lights earlier for algae growing in the lake, which can lead to water quality problems.

Water-quality issues range from the very local scale to the global scale. On the local scale, you have wastewater treatment plants discharging nitrogen into drinking water supply reservoirs. On the regional scale, there’s nitrogen in the air from automobile exhaust and agriculture, and then there’s the global scale, which are human-caused changes in the climate. As environmental engineers, we try to maintain water quality for the citizens of Colorado, so we have to think about all three of these levels.

We had the opportunity to participate in a study led by the Colorado Department of Public Health and Environment where they examined 38 reservoirs and lakes around the state. Based on those results, modifications of the regulations for the acceptable levels of algae in drinking water supplies were approved by the Colorado Water Quality Control Commission on June 11. It’s great to see some of our research having an impact.

2. Some of your other work involves acid mine drainage into streams in the Colorado high country. Where does the state stand when it comes to these types of pollution issues?

I’ve been working in the area of acid mine drainage since I came to Colorado in 1979. I thought there would be a lot more clean-up action right away, but it’s a very challenging problem. The impacts are both environmental and economic. Mine drainage significantly impairs aquatic biota – fish, insects. When you go into some of these valleys with acid mine drainage streams, you won’t hear any birds in the riparian vegetation because there are no insects for birds to eat. As Colorado and mountain resorts try to adapt to changes in duration of snow by moving toward a four-season approach to tourism, having more healthy stream ecosystems would be a valuable asset.

There are ongoing collaborative activities to address acid mine drainage research through stakeholder groups in the various watersheds in the states. I’m a member of the Snake River Watershed Task Force. There’s been forward progress but we still have a long way to go. Sen. Mark Udall and others have advocated for legislative change that would facilitate remediation of these mine sites. One of the major impediments is that the entity that comes in to do remediation may take on liability of the site in perpetuity. These mines are very old and the whole approach of identifying the principal responsible party doesn’t work out so well.

3. What is it like to work at the bottom of the world?

Working in the Antarctic has been exciting and rewarding. The streams in the Dry Valleys are similar to acid mine drainage streams because both are harsh environments – too harsh for insects to survive, for example. We call these types of streams “extreme streams.” In the Antarctic, the main drivers of change are regional and global climate change. The area where we’ve been working has been experiencing a cooling trend associated with the ozone hole, but as the ozone hole is ameliorated, there could be much more warming.

Our field work in the Antarctic and other areas can take from two days to three months as we collect samples and data on stream flow, for example. It then takes months to analyze the samples and data and to study the organisms. In the study of the alpine lake in Green Lakes Valley, we collect monitoring samples once a week for six weeks after ice-out. Last summer was challenging because ice-out didn’t happen until August so we had a late start and we kept sampling into September. This summer, we will begin sampling at the end of June.

4. What’s your favorite part of working at CU and INSTAAR?

As a faculty member, it’s a real privilege to teach students; they are truly an inspiration to me. They are the ones who will be on the front lines of dealing with the changing climate, and to be aware of that and to understand the scope of the challenges and say “I want to be an environmental engineer” takes courage. That’s a driver for them to want to learn what they can, so that’s an inspiration.

It’s also a privilege for me because there’s a strong commitment in our department to excellence in teaching. That’s one of the great strengths of our program.

5.  When you aren’t in the field or the lab, how do you spend your time?

My husband and I are in a book group that has been going for more than 30 years. Members are a diverse group from teaching, the business community, including the mayor of Louisville. We read a book a month and the books are quite diverse. I’m also a quilter, and I like to sew quilt blocks on airplanes. I make crib quilts and give them away to family or children of my grad students. When my students graduate, I give them a quilt block in a pillow. Sometimes I get way behind. I also like to travel, and I especially like to go to the beach – Monterey or the Bahamas.

Send your thoughts and suggestions for the Newsletter.
END_OF_DOCUMENT_TOKEN_TO_BE_REPLACED