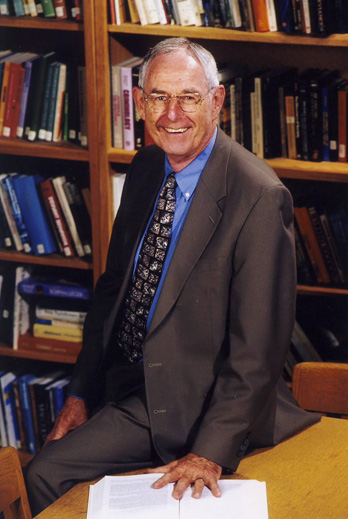 Delbert Elliott fights crime, but not in the cape-wearing, superhero kind of way; he battles drug abuse, violence and delinquency through research findings and programs that are proven to reduce anti-social behavior.

Elliott is director of the Center for the Study and Prevention of Violence at the University of Colorado Boulder, which recently received $6.5 million to fund a five-year project to reduce youth violence in Denver’s Montbello neighborhood. For years, the area has been plagued by gang violence and crime. Elliott is heading the project, which began a little more than a month ago.

He originally came to the university in 1967 on a half-time research appointment and taught courses focused on criminology. In 1992, he founded the center, which, through research, helps schools, communities and policymakers understand and reduce violence, which is considered one of the most important public health issues facing today’s youth.

“I had done work for Carnegie (Corporation) for a number of years prior, and as a result of that work, they thought it was critical that a center be established that was able to translate research findings from the academic world into practical policy and practice implications,” he said.

Since much of his career was spent conducting and interpreting studies, becoming the director of the center was a life-changing move. “I had to learn how to talk to politicians and reporters and to describe research findings in terms that everybody could understand … without all the caveats that we researchers footnote as possible exceptions to everything we say.”

One of the center’s statewide programs – Safe Communities-Safe Schools Initiative – was implemented after the Columbine High School shootings in 1999 and provides training and resources to schools throughout the state and helps them create safe learning environments. Another, Blueprints for Violence Prevention, certifies exemplary violence prevention programs.

Elliott is a nationally recognized expert on juvenile violence and school safety, and like all great crime fighters, has an alternate side to his life. His “therapy” entails going into his shop, turning on the power tools and making things with his hands. He has crafted china cabinets for his daughters, for instance, and last year he built clocks as Christmas gifts.

He’s also a great Disney fan, and he and his wife have seasonal passes to Disneyland.  “The child is still alive within us. It’s a great pleasure because we go to places where we see families having a great time, and we see good parenting there. Of course, we sometimes see bad parenting.” The couple has 13 grandchildren, so there are plenty of reasons to visit Disneyland and Disney World, and yes, he likes to ride the rides, just not the ones that turn you upside down.

1. How will the Montbello project work and what do you hope to achieve?

The effort has at its heart community empowerment. We are forming a community board made up of residents, some businesses operating there, and community leaders that will make decisions. Another board is made up of agency heads from Denver Public Schools, the justice department, the gang unit, and mental health and public health agencies mandated to serve this community. They’ll make recommendations about what they think are critical needs and the community board will choose programs to address those particular issues.

The hope is that we can influence key leaders to also begin to adopt these programs and what they deliver to residents and youth living in Montbello. We’ll come back every year or so to see if we’ve made progress, and if not, we’ll make changes. This is a unique opportunity to saturate the community with enough programs to see if we can really change life for children and families in Montbello.

2. What are some of the successful programs that the center has certified and might be recommended?

The best drug-prevention program is called Life Skills Training (LST) and is a three-year middle school (grades 6-8) program delivered by trained teachers. We know the program can reduce levels of illicit drug use by 50 percent to 70 percent. The program also cuts levels of use by those already starting to use drugs by the sixth grade. If you have kids using drugs in the sixth grade, that suggests a lifetime of commitment to anti-social behavior and drug use.

Two other good programs are essentially family-level intervention programs. One is Multisystemic Therapy (MST) and the other is Functional Family Therapy (FFT). The cost/benefit savings are great. With LST, results suggest you get $25 in savings for every $1 you put into the program. The other two, MST and FFT, also show good positive effects, somewhere between $3 and $15 savings for every $1 you put in for reduction in crime and violence. These interventions typically last four months to six months and help change family dynamics and give parents the information and resources to be better parents. These programs not only help the targeted kids – those already in the justice system – but there’s a payoff for younger siblings. Florida has saved some $50 million dollars since 2008 by implementing these programs.

3. The center has found certain programs that do not work, including the shock probation program Scared Straight. Is there any one reason why these don’t work?

Some programs don’t work because we don’t always understand how adolescents and children will respond to something we think will have an impact. With Scared Straight, the idea is that you take a kid and lock him up in a cell with an inmate who tells him about the horrors of life in prison. That supposedly will scare that person enough that they will say they never want to end up there. But it turns out these at-risk kids -- some already in the justice system -- look at these guys and think they are cool. They want to be tough like these guys. We know that program doesn’t work and it also has harmful effects. Kids come out of that program with a greater propensity to commit crime than those who didn’t go through the program.

In the case of D.A.R.E., which focuses on resisting drugs, part of the reason the original program was not effective is because it is implemented too early, before the onset of puberty, before kids begin to experience wanting to be accepted by peers. Programs for adolescents are administered by uniformed officers and there’s some question as to whether these are appropriate people to deliver the message to kids.

4. Dealing with youth violence must be both uplifting and heartbreaking.

When we see kids in families make a turn-around, it is very encouraging. That’s one of the reasons for wanting to be part of promoting programs that we know work. Unfortunately, the whole mechanism for funding these programs is not good. The grant goes for three years and then the program goes away. That’s why we’re in Montbello, to try to get the agencies to continue the funding after the grant ends.

The opposite side is that no program works 100 percent of the time. The discouraging part is that there are kids who go into the programs and come out the other side and nothing has really changed. The issues tend to be environmental conditions they have to live with that could be changed. The heartbreaking part is that it doesn’t have to be that way. If we could commit the necessary resources, we could change their lives. We could create more positive social learning environments and places for our children to grow and be free from the harmful and unfortunate circumstances they see and live with on a daily basis.

When I started this work, the conventional wisdom in the research community was that there wasn’t anything we could show that worked so there was nothing we could do for these kids. We’ve come a long way; we’re at a point now where we can say there are programs that work. There’s a political will that is necessary to do that. Half of the problem is the political influence of other kinds of programs we aren’t willing to cut even though we have no idea whether those programs are effective.

5. What would you consider your proudest achievement?

It comes down to: What have I built or achieved in my life that I want to see continued? I really want to see the center continue and be able to sustain itself over time. We have existed essentially with external funding -- without university funding – and it takes a lot of work to get grants to sustain it. We have made a significant impact in the state of Colorado.

More important is our Blueprints initiative because it is a very practical kind of help. If we could get those programs implemented on a wide-scale basis, we could see rates of violence, crime and drug use in this country drop dramatically.

Tagged with:
Center for the Study and Prevention of Violence

Center to partner with Montbello to reduce youth violence

Send your thoughts and suggestions for the Newsletter.
END_OF_DOCUMENT_TOKEN_TO_BE_REPLACED