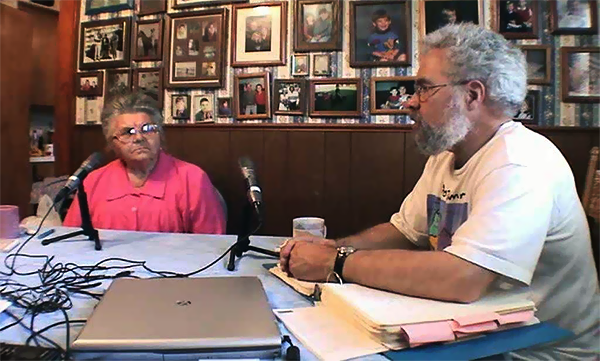 David Rood at work documenting a language with the help of Wichita speaker Doris Jean Lamar.

David Rood can tell you interesting facts about dozens of languages. For instance, he says, if you want to use an English noun that designates a countable object, such as “cat” or “idea,” you must note whether that noun is singular or plural.  “There is no way around it; the language forces that distinction on you, so you have to notice the real-world facts,” he explains. But in Chinese, you can talk about “catness” – one cat or some cats – without caring whether it’s singular or plural.

Rood, a professor of linguistics at the University of Colorado Boulder, studies language structures. He and fellow linguists aren’t so interested in “mastering the system” – or learning to speak the language – but in describing it. He’s been doing just that at CU since 1967. His research and writing, including teaching materials, continue to be recognized and used around the country.

1. What was your pathway to CU?

When I went on the job market, CU was looking for a linguist in the German department. In those days (1967), German had about 14 or 15 faculty members and a very large graduate program that included a linguistics track. In addition, there was an interdisciplinary faculty committee working toward adding a general linguistics program to the overall university curriculum. The job application process in those days was very informal – generally advertising was conducted by having the chair of the department doing the hiring ask his colleagues at other schools whether they had any students who were ready for full-time jobs. I interviewed with some of the folks from both sides (German department and linguistics program) at the Modern Language Association meeting in New York (which was held at the same time as the Linguistics Society meeting) and because I could fit into both programs, they offered me the job.

I hesitated because I had not yet finished my dissertation and I knew teaching full time was going to be time-consuming, and also because my family in New York state wanted me to return to the east. But the thought of being in at the beginning of a new linguistics degree program was intriguing, so I accepted the job offer. That was lucky: The following year, the whole academic job market dried up nationwide, and there were no jobs to be had.

2. How did you choose to study language?

I first heard of linguistics from a high school English teacher, who encouraged me to explore the field once I got to college. I took an introductory linguistics course, and that was all I needed. But the school I was attending, Cornell, had only a graduate program, so as an undergraduate I had to major in something else. I was actually planning a career in medicine, but I wanted to have an undergrad experience that wasn't going to be all science. In high school, I had discovered my father’s German textbooks and was just fascinated with the intricacies of the language, so I decided I’d put some time into German before plunging full-time into the science courses for pre-med. In the middle of my sophomore year, I was surprised by the award of a scholarship to study in Munich the following year (I had never dreamed of such an undertaking, nor applied for it), and I devoted most of that year to really learning the language. By the time that year was over, my fascination with linguistics and languages had overtaken the idea of being a doctor.

3. Your work has included study of Native American languages. How did you become interested in these languages?

Like many academic careers, mine is the culmination of many accidents. I went to graduate school in Berkeley with the idea of pursuing my interest in German and related languages, but in my second year, I asked my adviser whether he could help me find a summer job that had something to do with my studies. (I had spent most summers until then working in a typewriter factory in my hometown.) With his help and encouragement, I obtained a small grant to go with him to Oklahoma to begin field work on a language related to the one he was studying. Until then, I knew almost nothing about Native Americans or their languages. I quickly became fascinated with the language I was studying, however, (Wichita), and the people I was working with, and discovered that the language would be a good dissertation topic.

After I came to Colorado, I became acquainted with professor Allan Taylor, who was in the Slavic department and also part of the new linguistics program.  He had a lifelong fascination with Lakota, and we both had a strong interest in second-language teaching. He obtained a grant from the new National Endowment for the Humanities to write a textbook for a college Lakota course and invited me to be part of the project. First I had to learn the language, however, and so I acquired my second Native American language at that point. (See, another accident.) The materials we proposed were finished in the early 1970s. Now there is a course for elementary school children available that is much better than what we had, but our materials are still being used here and there more than 40 years after their preparation.

Probably the biggest impact I’ve had on the discipline is with these materials. I have continued to write technical papers about that language, and am currently working on another one, but the audience for such things is narrow – linguistics is a small field, after all. The interest in learning the language never fades, however.

I also was the editor in chief of the International Journal of American Linguistics for about 22 years. The journal (University of Chicago Press) is the only one devoted to studies of Native American languages.

4. What is the mission of the Center for the Study of the Native Languages of the Plains and Southwest, of which you are a member?

The center is a combination of library, archive for field notes, and data source for many languages, and a support structure for current students who want to do field work.

It tries to be a catalyst for linguistic studies of languages in the western part of the United States. My colleague, Andy Cowell, actually makes more use of its resources than I do now. He has engaged graduate students to work with Mexican indigenous languages spoken in the Denver metro area, as well as encouraging them to be involved with his own work on Arapahoe (spoken in Wyoming).

The center also has a library that includes the notes and book collections from several prominent scholars who have passed away. Many other resources in that library are copies of manuscripts or microfilms of data collected by early and mid-20th century scholars. I obtained those as part of a project in the 1970s to make computer-readable copies of such data. In those days, data entry for

computers was all by keypunch on what we called IBM cards, and the character set only contained upper-case letters, numbers and a few punctuation marks, so we had to invent ways to code complex phonetic symbols. However, once we had the data coded, we were able to make use of computer searches for mining that data. Those files have migrated from a large room full of punched cards to a couple of 9-inch tapes to a few floppy disks and now to a single DVD, and our coding system has been converted back to the complex original characters, now that the machines can handle them.

5. You once said that “language is a window into how people think, into cognition. And every language has unique kinds of structures that require speakers to pay attention to the world in ways that we might not otherwise pay attention to.” You compared English vs. Chinese when it comes to singular vs. plural. What are other examples that illustrate what you mean by this?

A similar example is tense: You have to mark a verb for either past or non-past; there is no time-neutral option except to describe it with words like “both then and now.” In contrast, a Lakota word like “shkate” can mean either “played” or “is playing” or “plays” or “has played” – time is irrelevant.

Coming from the other direction, Lakota forces its speakers to take note of whether an object is part of an event that is an actual fact or merely potential. So I have to distinguish between two forms of “car”:

In Wichita, if I am talking about past or future time, I have to say whether my statement is based on personal observation or not. “We are going to eat” is different if I am dishing up the food from what it would be if I heard someone was planning a party for us. My favorite example of this in real life is the sentence “I was cooking the meat.” Normally you would be aware of what you were doing, so you would use the personal observation form. But the reported speech form could be used if, for example, you put the meat down too close to the fire and it cooked without your knowledge. You would have to say in Wichita, “I cooked the meat without knowing it.”