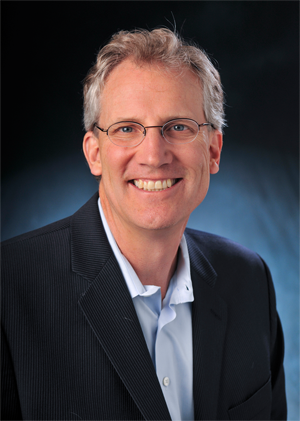 David Reed earned an undergraduate degree in electrical engineering, but he soon realized he was less interested in building devices than he was in assessing the bigger picture surrounding communication technology. And so he gravitated toward interdisciplinary programs during his graduate studies.

“They allowed me to focus on tech and understand how it worked, but also to incorporate the economic and policy trends and developments into describing the bigger picture more accurately,” Reed said. “That’s how I got to the Carnegie Mellon University Ph.D. program.” And that’s what also launched him into the communications and cable technology industry.

He worked for the Federal Communications Commission, then spent nearly 20 years as chief technology officer and chief strategy officer at CableLabs, a research consortium of cable television companies.

Now the Boulder native has come full circle, returning to the university where, as a youngster, he once sold sodas at Folsom Field but this time as a visiting scholar in residence at the Interdisciplinary Telecommunications Program. He also is leading the development of the Center for Broadband Engineering and Economics, which will train graduate and Ph.D. students to not only participate in the broadband ecosystem as engineers, but also become good decision-makers and natural leaders.

1. It seems that the broadband industry has exploded in the recent past. In what ways did the industry change while you were at CableLabs?

If you look at the industry from where we were 20 years ago to where we are today, it is true that it has exploded. But if you parse it down to smaller increments of time, you can see the gradual progression of advances in communications technology, incorporating and developing the notion of what we now call broadband. I think what’s been amazing is actually being able to work on developing the broadband platform, particularly on the cable side, that has had such an impact on society.

When I first started working on the cable platform, digital television was transforming society. With digital, you were able to get more channels as well as higher-quality television pictures. All of a sudden, instead of getting four to nine broadcast channels, you literally had 100 different channels, and the impact of all these different channels on lifestyle – whether you are fueled by an interest in sports, cooking or whatever – has been extraordinary.

Another change – one that emerged beginning in the late ’90s – was the Internet. It has changed how we search for and acquire information. The cost of doing this has been cut significantly and the ease of searching has greatly improved with the improvements in broadband services. We have so much information, literally, at our fingertips as an extension of the keyboard, and that has transformed our society again. While we take it for granted today that we don’t have to go through that long, gruesome boot-up process anymore; information always is available and searching for it is second nature to us now.

The third wave of change that is coming is the increasing speed of broadband, giving us the ability to more rapidly access larger amounts of personal information or high-quality entertainment.

2. You’ve been at the university for a year. Is the job of teaching what you expected, and what have you learned? What types of research are you conducting?

I really enjoy the teaching. In the business world, you are very focused and moving really quickly and you don’t necessarily have as much time for reflection as you would like. As the professors here have told me again and again, to really learn something and to be able to understand and absorb the material, you need to teach it. Teaching has been gratifying and enriching.

I have been doing research, looking at the growth in broadband enabled by new wireless technologies. For example, the emergence of Wi-Fi has been a significant development. My research looks at the evolution of Wi-Fi standards, in particular, how Wi-Fi is used by service providers to deliver services.

I’ve also gotten a couple of research gifts. One was from Google. I worked with co-authors at Google to study the issue of the Internet in emerging countries where a significant percentage of the population is not connected and how these individuals will be connected over the next 20 to 30 years. We take it for granted here because of the incredibly rapid rollout of broadband technology, even though we just started deploying this technology less than 20 years ago. I worked with my Google co-authors to develop broadband roadmaps that described a progression for the rollout of technology to deliver broadband services to underserved areas throughout the world.

A second research gift from Comcast looks at different topics, but those are still under wraps.

Here at ITP, we’re looking at video-streaming, which, as a broadband application, consumes the most bandwidth on networks today. I will be working over the summer to create a video lab that will be filled with the equipment we’ll need to research and better understand this technology. If all goes well, this fall we will have a lab course where students will be able to conduct a set of experiments allowing them hands-on experience with this strategic technology, and prepare them for a job in the robust broadband sector.

3.  Do you have concerns about the broadband industry, now or for the future, and what continues to excite you about the technology?

What’s exciting is we’re seeing a rapid increase of bandwidth that’s being delivered to consumers and that will serve as an innovation stimulus for broadband applications. We don’t know how we’ll use that in creative ways, but because the cost of delivering information on a per-bit basis is rapidly falling, we’ll see innovation that focuses on how to take advantage of that increased information-carrying capacity capability. For instance, you’ll have applications that will sense the information-carrying capacity your network has and will allow you to customize your quality of experience based on your likes and dislikes.

Of course the downside centers around privacy and the transparency associated with the decisions you make and what will be tracked and not tracked. It’s important that those decisions are respected. As huge data centers have the ability to store more information, we have to make sure the policy side keeps up from a privacy perspective.

4. Do you have a goal you’d like to accomplish in the next few years?

I’ve been fortunate to work in broadband industry where there have been enormous game changers for society. If you would have asked me in the ’90s how much cable television would change our lives, I wouldn’t have recognized it. If you would have told me that folks would be using mobile phones to check in with their spouse, I would have said that is an expensive luxury. If there’s a goal, I would say it is to help participate in the next broadband game changer through technology development and the training of students.

5. What are your interests outside of work?

My wife, Elizabeth, and I have raised two wonderful daughters, one who is now a sophomore at CU-Boulder, and the other now choosing where she will go to college. As a native Coloradan, I’ve got all the vices: fishing, hiking, skiing, sailing (on Dillon Lake) and golfing. I love the outdoors!