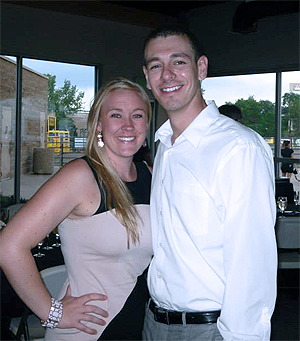 Christian Valtierra and his fiancée, Kerre Schmidt, who works at University of Colorado Hospital.

Introducing middle- and high-school students to the opportunities available in higher education is rewarding on many levels for Christian Valtierra, the assistant director for pipeline programming and university outreach in the Office of Inclusion and Outreach at the CU Anschutz Medical Campus. The kids are eager and energetic and Valtierra feeds off the energy. Sometimes, however, working with underserved populations and seeing the struggles they have can be difficult.

The pipeline programs and outreach initiatives are meant to help funnel individuals through the education tract leading to Anschutz, beginning as early as elementary school.

“We want to prepare the students and hopefully light the fire and provide assistance along the way. We continue to stay engaged throughout their educational paths so they can eventually meet their goals of becoming health-care providers,” said Valtierra. He often works with CU sister campuses, school districts, and outside entities to bring students to campus to introduce them to the college experience and show them the variety of careers available to them.

Valtierra said his route to CU was influenced by fate and his experience working with underserved populations. While studying at the University of Wyoming, he worked in admissions with Dominic Martinez, now the director of the Office of Inclusion and Outreach at CU. At UW, Valtierra had helped Martinez conduct programming that targeted minority and underserved populations. After graduate studies and work at the University of Nebraska, Valtierra took a position at Colorado State University. When a job opened up at CU nearly five years ago, Martinez reached out to him.

1. Did you know that you wanted to work in higher ed when you were in college or did it just happen? 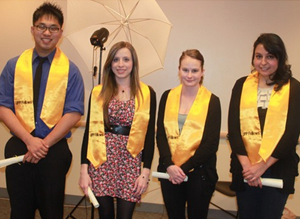 I was steered this way. One of my uncles in California was a role model as a successful dentist. I gravitated to the success of that profession without really knowing much about it. When I entered college, I met with my advisers and they went through all the classes I had to take to be a dentist. There were a lot of science classes and I knew at that point it was not for me.

I looked around figuring out what I wanted to do and learned more about Dominic’s background. He graduated with a teaching degree with an emphasis in U.S. history and I observed first-hand how he integrated educational pedagogy with social justice issues for recruitment programming at UW. I thought it was neat, how he incorporated these areas and captured participant’s attention while promoting UW, so I gravitated toward education.

Part of my decision was focused on learning more about history, particularly the Civil Rights era. One of my favorite memories at UW was working on an education symposium that brought in Bobby Seale as a guest speaker. I had hopes of teaching, but I was working in admissions, and I saw my niche as fitting in more as someone working in higher ed who would work with underserved populations.

2. What are some of the programs at CU you’ve been involved with and how have they helped young students? 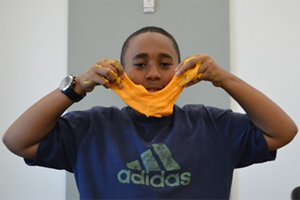 One is Health Professions Opportunity Day (hPod), which was started by Dominic and has been running for seven years. It was designed to target middle- and high-school students to expose them to health care fields but also to our amazing campus. Since I’ve been here, we’ve had a great partnership with the Center for Pre-Collegiate and Academic Outreach Programs and served anywhere from 200 to 300 students yearly from the metro area. We really show them the opportunities and possibilities available and let them know that if they put their minds to it and focus, and by relying on the support systems around them, they will be able to succeed. We’ve seen some of the students matriculate to the downtown campus and we have one young lady that went through hPod several years ago that is currently in medical school. It’s really gratifying to see them become part of the system and know that you had a role in at least planting a seed or continuing their interest in education.

The Undergraduate Pre-health Program, which we refer to as UPP, was started by Dominic and is beginning its ninth cohort. We’ve served a little more than 250 students in eight years. About 100 have been eligible to apply to professional and/or graduate programs and about 90 have matriculated through, mostly here at the Anschutz Medical Campus. Some of the early cohort students are completing medical school and entering residencies. Some have completed nursing programs that have been practicing and their communities for several years.

Even though we focus on the underserved and underrepresented, we work with all students – students who are dedicated and eager, and even some who need additional motivation. Having the opportunity to work with first generation, low-income and other underserved populations is the most exciting part of my job because I fit all of those categories. Working through the barriers these individuals come with, whether it’s being the first in the family to graduate from high school and not having that education background in the home or coming from a lower socio-economic background, reminds me of where I came from and that can be difficult to deal with.

3. What were some of the barriers you faced and what kinds of programs were available to help you? 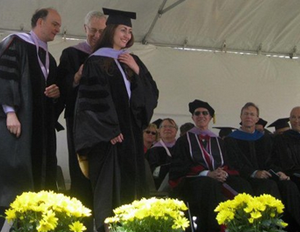 I came from a school that wasn’t very high-achieving as far as scholastics was concerned, and I didn’t have those individuals around that could motivate or provide good examples. My biggest advocate, even to this day, is my mom; she always preached education. But I didn’t have examples at home because she only had an eighth-grade education. At high school, it was about doing the bare minimum, and I didn’t have the skills to be successful. When I got to college, it hit me that I was unprepared to manage the expectations and responsibilities. The social part of college took me away from classroom. A lot of the problem was me not prioritizing properly and not seeking out resources that were there for me. Dominic played a vital role in helping me connect to the right people.

I was part of SSS – Student Success Services – which is part the TRiO programming umbrella, a federally funded program that was set up to target first generation, low-income students to assist them getting into and during college. I was part of the McNair scholars program, which is a Ph.D. preparation program that really helped me fine-tune skills I needed to be a successful student. I also was part of the Mortar Board honor society. I was very happy with the opportunity to be considered and being selected to such a prestigious academic honorary was a big accomplishment that was far from reality when looking back at where I started.

4. What occupies your time outside of work? 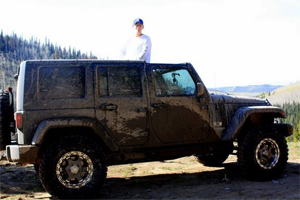 Growing up in Wyoming was a great experience. I was exposed to a lot of outdoor activities: hunting and camping. It was really different because most of my family lives in California, so when I talk with them about my experiences, they couldn’t relate. I enjoyed being outside and as I grew up, I maintained that interest. Not so much hunting. We were taught that hunting was a way to put food on the table, not a sport. So now I’d rather see wildlife out there in the natural space. I have a Jeep with big tires and a lift kit and any chance I have, I like to go four-wheeling in remote Rocky Mountain areas.

5. You mentioned that you were faced with struggles growing up. Do you have a favorite good memory from that time? 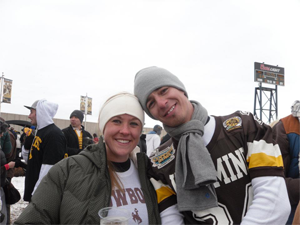 I have a Jackie Robinson bobblehead that I got when I went to my first Dodgers game, shortly after migrating from Mexico to the Los Angeles area when I was 7. It’s significant because I don’t have a lot of fond memories early on because of the struggles and financial hardships we went through. In addition it was right before the Rodney King riots and we were living in the middle of noticeable tensions between groups across races and that was foreign to a new Mexican immigrant. One of my best memories from the time is going to the Dodger game and buying this bobblehead. I’ve been in the United States for 24 years, but at one point, I was undocumented, and that presented many barriers. That was one of the big pieces that we eventually overcame.
Tagged with:
Office of Inclusion and Outreach

New videos show off ‘A Place for You at CU’