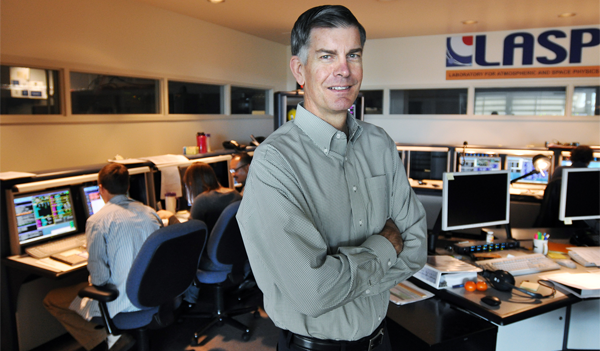 Bill Possel grew up during the heady days of NASA’s Apollo missions, after President John Kennedy challenged the space agency to put a man on the moon and when astronauts Neil Armstrong and Buzz Aldrin became the first to place imprints on the lunar surface. Excited by what he saw, Possel dreamed about working in the space program.

It became the main reason why he joined the U.S. Air Force. During his 27-year career, which he finished as a colonel, he realized his dream, with duties that included working on space shuttle experiments and developing large satellites. The work he enjoyed most, however, was spacecraft operations, and in 2006, that led him to the Laboratory for Atmospheric and Space Physics (LASP) at the University of Colorado Boulder, where he is director of Mission Operations and Data Systems. 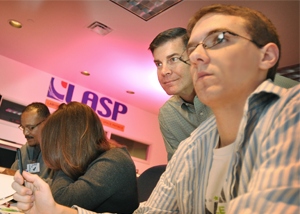 LASP focuses on science within our solar system, with scientists and engineering staff working together to build and later operate space instruments and spacecraft. The research institute also takes data from the missions it monitors, processes the information and then disseminates the data back to the scientists.

LASP employs about 450 people; Possel’s group numbers about 100, split between scientists and staff members. About 50 students also are involved in the work. “I’m thrilled to be able to work in a position like this at CU,” Possel says. “It’s at a marvelous institute, especially because we actually are operating NASA spacecraft with students. That’s probably why I’m here.”

1. What are the NASA spacecraft that LASP operates?

We operate four: Solar Radiation and Climate Experiment (SORCE), Aeronomy of Ice in the Mesosphere (AIM), Quick Scatterometer (QuikSCAT), and Kepler. If you add up all the dollars it took to build those satellites, it’s more than a billion dollars’ worth of missions that we operate here. LASP built all of the instruments on SORCE and two of the three instruments on AIM. We’re focused on the mission operations part of Kepler and QuikSCAT.

SORCE, for instance, looks at the sun’s radiation – the total amount of light coming from the sun – as well as the specular radiance, or how much light is coming from different wavelengths. Data from it plays a role in climate models. AIM is designed to monitor high-altitude clouds above Earth’s polar regions.

2. You help run Kepler operations with student support. How does that work? 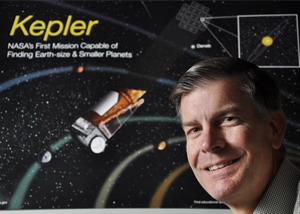 Students are involved in software development, including the software we use to operate the spacecraft and instruments, and for the planning and scheduling of activities. They’re also involved in data processing and data distribution. There are a lot of very smart students who have computer science backgrounds or science and physics backgrounds who help us. We also recruit students to support us in the operations of spacecraft, and they are the ones that send commands to spacecraft under the supervision of one of our staff members. In that program, we bring students in, usually at the end of their sophomore year, and take them through a 12-week summer training program where we teach them everything from basic orbital mechanics to specific details about each one of our spacecraft, our instruments and how they all work. After earning certificates, student responsibilities in these paid positions include working shifts when we have commanding passes and we send commands to the spacecraft. They’re also in charge of subsystems, so for instance, the students monitor how the batteries are doing. There’s also a student team that each day looks at the telemetry and performs an assessment of how well their subsystem is performing. They are pretty much our first line of defense concerning the health of the spacecraft, instruments and subsystems, so they play a very critical role.

We also bring students in for anomalies -- problems with the spacecraft. Whether it is nights, weekends or holidays, we’ll call in students who are on shift to assist with recovery activities: understanding what went wrong, how to fix the problem, and how to get back to collecting science. They’re getting important hands-on experiences at CU.

Other schools work with smaller spacecraft, but we have the strongest student program because of our training. Every year during the certification process, only an average of 70 percent will pass. These are the cream-of-the-crop students who make it through the interview process. They work full time in the summer and 20 hours a week during the school year, so students must balance that workload with their academic workload. It’s a challenging and demanding job.

3. Kepler initially was launched to “look” at 100,000 stars. What types of information has the spacecraft delivered to us so far?

Kepler is nearing three and a half years of operations, and the mission has been extended for another two years, so we’ll keep operating it. The spacecraft is changing the way we understand planet formation, and has found more than 3,000 new planets, all within our galaxy. Kepler is looking for Earth-like planets in an Earth-like orbit. It’s a photometer, so if a planet goes in front of a star, the light or intensity from the star dips a little bit. If the light thins today and you see the same dip in the star a year from now, you can say, “Maybe that’s a planet.” You wait another year or for another data point and collect the data, then wait again. If it happens again over the same cycle, scientists say that’s a potential planet. So we’re close to probably finding an Earth-like planet in an Earth-like orbit.

After a review of all NASA missions, Kepler was ranked as the No. 2 mission doing this type of physics. There’s also a lot of excitement from the public about it. It is finding planets that we never thought could exist: planets larger than Jupiter that orbit their stars every three days. We’ve been able to detect these because of a couple of reasons. The orbit Kepler is in is called an Earth trailing orbit, so it goes around the sun, looking at one region of our galaxy. It is focusing on a specific area, and the camera that Ball Aerospace built, the photometer, is extremely sensitive. That’s been one of the keys to the success of the program. Kepler is about 10 times more accurate than Hubble. Because of an advancement in detectors in pointing performance and the smart scientists on the ground who process data, we can pull out very weak signals to determine if these are planets. Kepler is revolutionizing our understanding of how planets are formed and our students are part of the team making new discoveries.

4. What are some of your favorite memories from your time with LASP? 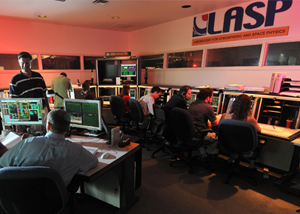 One was the night we launched Kepler. We had an open house at LASP with probably 500 visitors watching the launch on TV and witnessing the first contact we had with Kepler. That many people at an event like this was very special. We were in the control room and I remember the first moment we saw the signal coming back from Kepler and knew it was fine and healthy. That was very exciting.

The other was recently. One of our former students that graduated in 2006 was key member of the Mars “Curiosity” team. He was interviewed on an L.A. television station a week before the launch. Here was a student that went through our program and now has a major role in the success of that mission. It shows the kind of students who graduate from the program and how they go on to very good positions. They’re given more responsibility than a graduate from another school because of the experience they had at LASP.

5.  The night sky inspires awe or romance for many of us. What do you see?

I enjoy amateur astronomy. I’ve been part of a group that goes to Rocky Mountain National Park, which puts on stargazing events about six or seven Friday evenings over the summer. I go out there with 20 or so other amateurs and we bring out telescopes. Usually we have a crowd of more than 100, most of whom have never looked through a telescope or seen the rings of Saturn or the spot on Jupiter. I’ve been doing amateur astronomy since I was a kid and I’ve been teaching at the park for 10 years. It’s the coolest thing when you have a little kid who looks through the telescope and you hear a “wow” when they see a planet or a star.