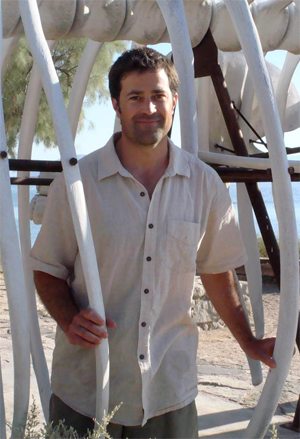 The structure of some higher education institutions sometimes does not allow students to pursue dual passions. Such was the case with Aaron Hirsh, who loved biology and writing. Despite the “rules,” he found a way to combine his interests of writing and contributing to the project of working toward a society with a more functional and sustainable relationship with the ecosystems that support it.

Hirsh is a research associate in the Department of Ecology and Evolutionary Biology at the University of Colorado Boulder.

As a youngster, he was a fan of Stephen Jay Gould, the evolutionary biologist and historian whose writings on science are some of the most influential and well-read. At Princeton University, Hirsh’s imagination was captured by the possibility of applying mathematics to biological populations. But he also loved literature, especially writings about nature and science. He read Thoreau, Annie Dillard, Barry Lopez and Peter Matthiessen.

“For a while, I did so secretly, majoring in both EEB and Comparative Literature,” he says. “Soon enough, I was found out, and had to pick one. Without regrets, I chose biology, but I have always felt like both disciplines are dear to me.”

For about a decade, he and his wife, Veronica Volny, along with others, taught at a field school at the Sea of Cortez. The sessions and the sea – and the interwoven relationship between man and nature -- inspired him to write “Telling Our Way to the Sea: A Voyage of Discovery in the Sea of Cortez,” which was released in August of 2013.

His writing also has appeared in literary journals, as well as The New York Times and The Best American Science Writing.

In 2002, I accepted a position as an assistant professor in the department of ecology and evolutionary biology, but deferred beginning the job as I was still completing a postdoc at Stanford. At that time, I was already spending a lot of time writing literary essays and articles about ecology and evolution -- pieces intended for a broader, non-technical audience.

When it came time to start thinking seriously about putting together my lab, I realized that my true passion lies in using words to communicate the beauty, meanings and importance of science. I therefore declined the professorship in order to concentrate on writing. I was, however, very eager to maintain some affiliation with the department, which is full of people whose work I admire: I like going to seminars and hearing about what's happening in the field. I also wanted to be able to keep teaching the field course in the Sea of Cortez.

2. What did you find at the Sea of Cortez?

I've been going there since 1998, when my wife, Veronica, took me down there. What I have found is an ecosystem that is magnificently abundant and diverse. What I have understood, though, is that what we see now, as spectacular as it is, is but a shadow of what the place once was. That discovery got me thinking about how often we overlook the changes that came before our time, and therefore forget, generation by generation, how extraordinary and valuable ecosystems once were. Fisheries biologists call this the problem of the shifting baseline, but I think it applies very generally to our perception of nature.

3. Your book, “Telling Our Way to the Sea,” is about your time at the field station. What is the message of the book?

The book discusses how life in the Sea of Cortez has been reshaped by complex human ideas and decisions—the laws and economics of fishing, property and water; the dreams of developers and the fantasies of tourists seeking the wild; even efforts to retrieve species from the brink of extinction—all of which have caused dramatic upheavals in the ecosystem. But it also examines the students and how they come to understand their places in the altered environment.

We need to find new ways to look at what we used to call wilderness. Ecosystems everywhere are deeply altered, and yet they are certainly not without grandeur, beauty and value. The challenge is to hold these two visions together: see the place for what it is--deeply changed by humans--and yet hold on to a sense of wonder.

4. You are chair of the Vermilion Sea Institute. Did the institute come about because of your teaching?

Yes. VSI is now an organization through which a number of programs and universities offer courses in the Sea of Cortez. More recently, the organization has become involved in a variety of other efforts to work toward sustainable and enriching relationships between humanity and the ecosystems we depend on.

5. You mentioned that your wife introduced you to the Sea of Cortez. Is she also a biologist? What does the future hold for the field school?

Veronica knows the Sea of Cortez very well. In fact, around the Vermilion Sea Field Station, where we teach, the locals have a lot more respect for her than they do for me: She's the gringa who can fix an outboard and drive a panga; I'm the guy whose wife knows how to fix an outboard and drive a panga. Since we started teaching our field courses down there in 2000, she has played an absolutely vital role in teaching, guiding and keeping us out of danger. (She, too, has a Ph.D. in biology from Stanford; she did a postdoc on marine mammal population genetics.)

Sadly, we had to stop teaching our courses several years ago on account of a State Department advisory about travel in Baja California Norte, where our beloved Vermilion Sea Field Station is located. In about a week, I'm going to travel down to Cabo Pulmo, in Baja California Sur, where there's no State Department advisory, in order to check out possibilities for field courses down there.