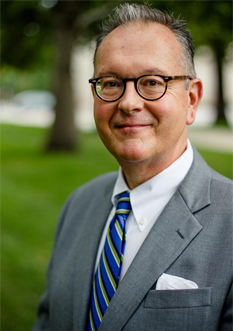 Following a national search, the University of Colorado Foundation Board of Directors has appointed Jack Finlaw as president and chief executive officer of the Foundation, effective Nov. 17. Finlaw is a Denver attorney and community leader with wide-ranging experience in the corporate world, the nonprofit sector, and state and local government.

The CU Foundation is charged with managing and investing private support in partnership with the University of Colorado, including endowments of more than $1.1 billion and more than $150 million annually in donor contributions.

Finlaw comes to the Foundation from Gov. John Hickenlooper’s office, where he has been chief legal counsel since 2011. Finlaw has been a part of Hickenlooper’s leadership team since 2003, serving as director of Denver’s Theatres and Arenas Division and as Hickenlooper’s deputy chief of staff during his tenure as Denver mayor. Finlaw also was chief of staff to interim Denver Mayor Guillermo Vidal in 2011.

“This is an exciting opportunity for me to play a key role strengthening the University of Colorado, a flagship public university that contributes so much to Colorado citizens and communities,” Finlaw said. “I hope to enhance collaborations between the CU Foundation and the university, and maximize donors’ ability to pursue their passions at CU.”

Said Hickenlooper, “Jack Finlaw has been an outstanding contributor to our leadership team, always providing unwavering counsel and guidance. We are so happy for Jack, and are thrilled he will now be devoting his talents and energies to advancing the mission of the University of Colorado, one of our state’s most important public institutions.”

Finlaw and his team will be tasked with optimizing the administration and investment of gifts and endowments benefiting the University of Colorado, at a time when donor support is more critical than ever to CU’s $3.3 billion budget mix. Recognizing the need to increase CU private support to fill the growing gap in public funding of higher education in the state, the university recently revamped advancement operations to improve alignment between fundraising activities and strategic university priorities. Including funds given through both the CU Foundation and the university, CU received $298.1 million in private support from individuals, corporations and foundations last fiscal year.

“The CU Foundation is delighted to welcome Jack as our new chief executive,” said James Linfield, chair of the CU Foundation Board of Directors. “Jack is a proven leader with a strong track record working effectively with multiple constituencies. His integrity and collaborative spirit will be great assets as we strengthen our service to the University of Colorado and honor the intentions of the 50,000 donors who give through the CU Foundation each year.”

Said CU President Bruce D. Benson, “I have known Jack for some time and think highly of his skills and experience. I look forward to working with him to continue to enhance our university and opportunities for its students.”

Before his public sector career, Finlaw worked as deputy general counsel for Comcast Corp. and as corporate and securities counsel for Jones Intercable Inc. Finlaw is a member of the board of the Colorado Symphony Association, Opera Colorado, and the Denver Public Library Friends Foundation. Finlaw earned a bachelor’s degree from Georgetown University and a juris doctorate from the University of Denver.