The council’s April 25 meeting at 1800 Grant St. included the presentation of awards to Tamara Terzian, Ph.D., for Distinguished Service; to Michael Lightner, Ph.D., for Administrator of the Year; and to Jay Dedrick for Service Excellence. Awards were presented by Faculty Council Chair Joanne Addison. 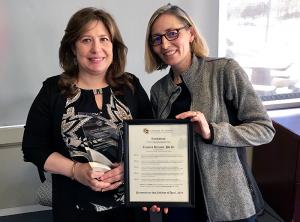 Terzian is an assistant professor in the CU School of Medicine at the Anschutz Medical Campus. The Faculty Council Distinguished Service Award recognizes the service of faculty to CU. It is designed to recognize contributions through participation in faculty governance, particularly through activities in Faculty Council and its committee structures. Terzian chairs the council’s Personnel and Benefits Committee and is the council’s current secretary. She was praised as being a staunch advocate for faculty since first becoming a member of the School of Medicine Faculty Senate in 2014. She has contributed to improvements around such issues as anti-bullying, parental leave, tuition benefit, retirement, fertility, and gender equity. 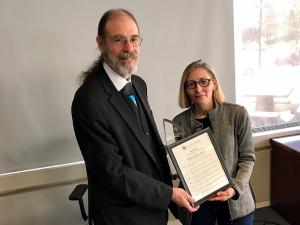 Michael Lightner receives the Administrator of the Year Award from Joanne Addison.

Lightner is vice president and academic affairs officer for the CU system. He serves as the president’s liaison between system administration and faculty across all four campuses. The Administrator of the Year Award recognizes significant contributions to the university, to Faculty Council and/or to shared and faculty governance. A professor of electrical, computer and energy engineering, he joined CU Boulder in 1981. He was lauded for his track record in scholarship, teaching and service, and for being a champion of shared governance. "Lightner is an innovative leader, a person of character and an agent of effective change, whose example is to be emulated," the award resolution reads. 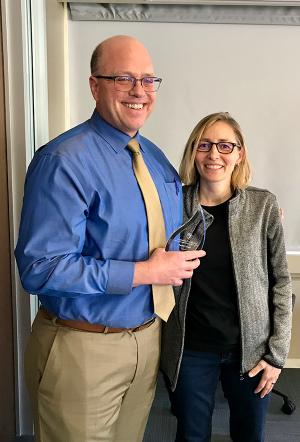 Dedrick is internal communications manager in the Office of the President at CU system administration. The Service Excellence Award recognizes service to the Faculty Council and CU faculty. The editor of CU Connections, Dedrick also is a non-voting member of the council’s Communications Committee.

The winner of the council’s Leadership in Public Education Award – which recognizes a public official or other individual in the state whose leadership on issues directly affecting public higher education results in significant, positive change – will be announced at a later date.

The April council meeting also featured the election of officers for the next academic year. All three are continuing in their roles from this year and were elected by acclamation: Joanne Addison, chair; Maja Krakowiak, vice chair; and Tamara Terzian, secretary.

In other business at the April 25 meeting: