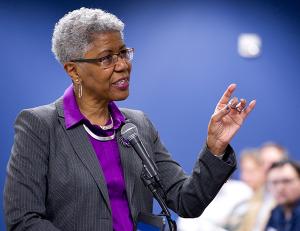 In an effort to boost knowledge and gain expertise in best practices as related to diversity and inclusion, Faculty Council has partnered with Professor Emerita Brenda J. Allen.

Allen, professor of communication and former vice chancellor for diversity and inclusion at CU Denver, spoke at the Dec. 5 Faculty Council meeting at 1800 Grant St., where she began sharing plans for the remainder of the academic year.

Allen said she intends to attend council meetings regularly beginning in February, and will facilitate a half-day workshop at the council’s retreat in March.

Allen was one of several guests at last week’s wide-ranging meeting, which also included a discussion of divestment, which Faculty Council Chair Joanne Addison said was prompted by the University of California System’s recent partial divestment of fossil fuels.

CU Treasurer Dan Wilson said he and others in management are working on advancing the topic, but noted the complexity of university assets requires more direction from the council. He described four main pools of assets, including CU’s endowment, which is overseen by the CU Foundation Board and not by the CU Board of Regents. The treasury pool is the university’s operational assets, while the university’s non-PERA retirement assets currently provide investors with the ability to choose where their funds are invested. Non-pool money completes the set of assets.

“We are working with our investment advisers in legal to see what is possible,” Wilson said. “But when it comes to divestment, which pot of money do you want to talk about? That’s the question for this group.”

Addison said the council will seek further clarification of the goals of the campus-based Faculty Assemblies and have the council’s Budget Committee report back to the group.