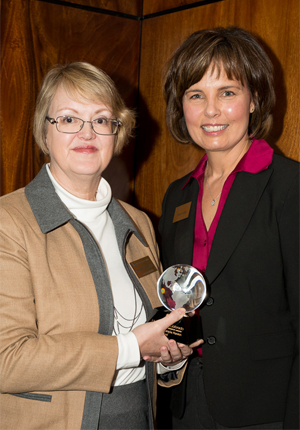 Patricia Rankin, the associate vice chancellor for research at the University of Colorado Boulder, will be the first to tell you that she’s data-driven. She’s a physicist, after all. While Rankin’s drive may be fueled by data, her leadership has yielded major transformations with a very human impact.

Rankin credits ELP with teaching leaders the skill set they need to be effective.

“Today, we’re much more cognizant of the fact that you come into leadership roles probably because you have got a propensity to solve problems, but that doesn’t necessarily mean you come in with the skill set to solve those problems,” she said. “I tended to view things as very much black or white, and one of the things that I really got out of the ELP program and some of my later experiences was the value of understanding compromise.”

In a letter of support for her nomination, CU-Boulder Chancellor Phil DiStefano credited Rankin’s leadership with transforming many aspects of the Boulder’s research functions. These efforts culminated in growing the campus research operations by 15 percent in fiscal year 2013-14 to $412 million in research awards.

Rankin was instrumental ensuring the Office of Contracts and Grants and Sponsored Project Accounting shared a common mission and goals, which wasn’t always the case. The organization underwent “Lean Six Sigma” training and incorporated those results to streamline processes and improve turnaround and response rates. Today, the two offices have gone paperless and will implement the Info-Ed online tool to process research proposal submissions and awards in early 2015 – a project that stalled for six years before Rankin took the reins.

“When you go to the Office of Contracts and Grants now, there is a bell that they ring whenever they’ve accomplished something like a faculty member getting their first grant or when a major award has come in or we’ve hit the submission deadlines for NIH,” Rankin said. “There is just an infectious feeling of enthusiasm there and an understanding of just how key they are to the overall university activity on research. And having been part of setting up that turnaround is definitely something I’m counting as an accomplishment.”

Rankin had a key role in the effort to establish the Boulder Campus Office of Industry in September 2013. The goal of this office is to provide a single point of contact for industry partners and to help faculty members who want to partner with industry. The office has helped to increase and diversify funding sources.

“While this project is in its infancy, there are already clear signs that the successes realized to date will be scalable for the benefit of the Boulder campus,” DiStefano wrote.

While she has thrived in her academic and leadership roles, Rankin placed an emphasis on mentoring and encouraging diversity in the sciences. Growing up in the United Kingdom, her parents supported her interest in science and she attended the all-girls Queen’s School. This built her self-confidence and gave her a breadth of female role models in leadership positions. When she entered Imperial College, Rankin experienced some culture shock – less than 10 percent of her class was female. However, the support and encouragement she’d received to that point kept her driven and successful, which bred more encouragement. As an assistant professor, she began to realize her experiences weren’t typical.

This idea really sunk in when she took on her role as principal investigator for Leadership Education for Advancement and Promotion (LEAP), a five-year ADVANCE Institutional Transformation grant that aimed to help women move into leadership roles in the science and engineering fields. She learned that women in the sciences face stereotypes and micro-aggressions that affect their success.

“If you’re a woman in science, people are always asking you why there aren’t more women in science. And I really couldn’t answer that question until I had spent the five years on the ADVANCE program because that was my first exposure to what the research was saying,” Rankin said. “And that was the point when I really began working effectively on making sure that more women got the encouragement and support they needed.”

When NSF funding for the LEAP program ended, Rankin leveraged its success to permanently institutionalize the program at CU-Boulder. She introduced a leadership program for assistant professors – men and women – that gave them insights into university operations and helped them build support networks to solve challenges in their research and their lives.

“Patricia strongly supports both men and women in pursuing their career goals, but appreciates the unique challenges that women face in advancing their careers,” said Cynthia Husek, assistant vice chancellor of research, who nominated Rankin for the ELP award. “However, her most enduring legacy is what she has done for others by teaching them the pursuit of excellence, thoughtful risk-taking, innovation and creativity, transparent communication, and, most importantly, accountability for oneself.”

“With many of these mystery series I enjoy, you have to admit that if you were actually living there and the village had that high of a murder rate, you’d be moving,” she said, laughing.