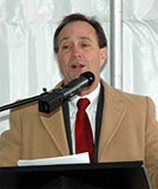 Rep. Ed Perlmutter talks about the partnerships that led to the completion of the interchange at East 17th Place and Interstate 225 on the east side of the Anschutz Medical Campus.

Officials cut the ribbon on the 17th Place-Interstate 225 interchange Monday morning, ushering in an important and long-anticipated access point to the Anschutz Medical Campus.

The bridge is expected to open for public use by March 1.

About 40 people attended the ribbon-cutting ceremony of the interchange, which will offer full access of I-225 via East 17th Place, just north of Colfax Avenue.

Vice President for Health Affairs at the University of Colorado and Executive Vice Chancellor of the Anschutz Medical Campus Lilly Marks called the interchange a significant transportation upgrade.

“We look forward to enhanced access to our campus, which is critical to all of the occupants of this campus and to all of the patients and community who come here,” Marks said.

Hogan said the Anschutz Medical Campus sees 58,000 in-and-out vehicle trips each day, and the old 17th Place interchange was designed to serve only 4,000 vehicles per day.

“This project was critically needed and will be an important link to help serve and make this entire area a success,” Hogan said.

Perlmutter said the bipartisan, public-private effort was carried off because “as Coloradans we work together well.” He added, “It would have never happened but for the fact that Children’s Hospital and CU and the Aurora Economic Development Council, the chamber of commerce, and the city of Aurora were all very focused on getting this project finished to build out what is the best medical center in the entire country. It is the envy of the entire nation.”

Hogan noted that the Anschutz Medical Campus is a major economic engine in the city and region, and it will only strengthen with the opening of the Veterans Affairs Medical Center in 2015. Hunt received spontaneous applause when he said, “This really does help tie together jobs, living areas and, in this case, a premier health care facility for the entire state. And it’s not going to be very long before light rail transit also makes it to the campus.”

Cutting said the project is a perfect example of what Congress intended with the American Recovery and Reinvestment Act.

“This is the project that is helping America get back to work,” he said. “ ... This project was delivered ahead of schedule and was accelerated because of the partnership between the state, federal and local agencies.”