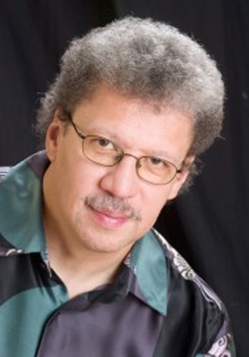 The UCCS Galleries of Contemporary Art with UCCS Peak FreQuency Creative Arts Collective will host composer and pianist Anthony Davis at 7 p.m. Sept. 17 at GOCA121 in the Plaza of the Rockies, 121 S. Tejon Street as part of the “Sonic Landscapes” concert series.

The concert and exhibit are free and open to the public, however, advanced tickets are required. Tickets are available by visiting: http://anthonydavisgoca.eventbrite.com/. Donations are accepted.

National Treasures: Anthony Davis in Residence features a concert of Anthony Davis’s music in conjunction with UCCS Department of Visual and Performing Arts music faculty and guest performers. This concert includes arias from Davis’ operas “Lilith” and “American Woman,” along with four jazz quintets and solo works featuring Davis on piano. The concert will be in GOCA 121 with a unique backdrop of the exhibit “Visual Environments: Pattie Lee Becker & Suchitra Mattai.” This collaboration between GOCA and the Peak Frequency Creative Arts Collective promotes an interdisciplinary approach to contemporary music, visual art, and live performance.

The concert includes four quintets, arias from two of Davis’s operas, and solo piano works. The all-star lineup includes Anthony Davis ,piano; Solveig Olsen, soprano; Glen Whitehead, trumpet; Sondra Bell, trombone; William Malone, saxophone;  Bob Jurksheit, vibraphone; Marc Neihof, bass; and Carl Cook, drums and percussion. During his stay, Davis will present workshops and lectures on his opera works, work with students on opera scenes and improvised composition and will perform a concert with faculty and students featuring his work. Davis will begin his residency as the special guest in the Prologue Series from THEATREWORKS and the UCCS Theatre Program in conjunction with the Pulitzer Prize winning play ”Seven Guitars.” During his stay, Davis will also work with music students in MUS 2300 Electro Acoustic ensemble.

Becker and Mattai are Denver-based artists translating their experiences of environments through painting, letterpress, drawing, and mixed-media, Becker from a microscopic scale and Mattai an industrial scale. While exhibiting distinct bodies of work for this exhibit, their use of pattern, line, color and a drive to explore and investigate both natural and built environments connects their work.

Called “A national treasure” by Opera News for his pioneering work in opera, Anthony Davis’ music has made an important contribution in opera, in chamber, choral and orchestral music. He has been on the cutting edge of improvised music and jazz for more than three decades. Davis continues to explore new avenues of expression while retaining a distinctly original voice. Davis has composed five operas. “X: THE LIFE AND TIMES OF MALCOLM X” with a libretto by Thulani Davis, had its world premiere at the New York City Opera in 1986. His latest opera, ”Lilith”(libretto by Allan Havis) had its world premiere at the Conrad Prebys Music Center at the University of California San Diego in 2009.

A 1975 graduate of Yale University, Davis is currently a professor of music at the University of California, San Diego. In 2008 he received the Lift Every Voice Legacy Award from the National Opera Association acknowledging his pioneering work in opera. In 2006, he was awarded a fellowship from the John Simon Guggenheim Foundation. Davis has also been honored by the American Academy of Arts and Letters, the New York Foundation of the Arts, the National Endowment of the Arts, the Massachusetts Arts Council, the Carey Trust, Chamber Music America, Meet-the-Composer Wallace Fund, the MAP fund with the Rockefeller Foundation and Opera America. He has been an artist fellow at the MacDowell Colony and at the Rockefeller Foundation’s Bellagio Center in Italy.

Pattie Lee Becker is an artist and designer who focuses on pattern and color to narrate subconscious worlds. Through drawing, printmaking and sculpture, familiar and foreign forms arise in hauntingly playful relationships. Raised in the Midwest, Becker spent her childhood surrounded by prairie and open sky. After graduating from Rhode Island School of Design, she moved her studio to Brooklyn, N.Y., where she developed her practice for a decade before relocating to the Rocky Mountains. She holds a master’s in fine arts from Columbia University’s School of the Arts and has been awarded numerous residencies and fellowships.

Suchitra Mattai was born in Guyana, South America, and is of South Asian descent. Mattai received a master’s in fine arts in painting and drawing and a master’s in South Asian art from the University of Pennsylvania. She also studied at the Royal College of Art, London, and Pratt Institute, Brooklyn. Mattai has exhibited her work nationally in solo and group shows in Denver, Philadelphia, New York, Minneapolis, and Austin. Her work has also been included in the curated publication, New American Paintings, and the viewing program of The Drawing Center in New York City.

GOCA is a regional hub of contemporary art, culture, and conversation. By featuring world-class artists, hosting artist & expert talks, and offering meaningful events, the galleries engage UCCS students, faculty, staff and Pikes Peak Region community members in contemporary culture and life. GOCA features two galleries, one founded on the UCCS campus in 1982 and a satellite opened in 2010 in the Plaza of the Rockies building.

The Peak FreQuency Creative Arts Collective serves as a platform for innovative, culturally diverse pursuits in music, as well as interdisciplinary practices and research in sonic arts and other fields. A resident organization of the music program of the UCCS Department of Visual and Performing Arts Department, Peak Frequency presents thematically designed, carefully curated concerts as well as interactive residencies with guests drawn from the international music and arts scenes that reflect both faculty and student research, creative work and VAPA Music curriculum directions.

Tagged with:
Department of Visual and Performing Arts

Dassanowsky appointed to Board of Advisors of the Salzburg Institute