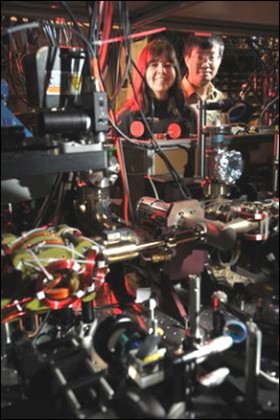 Physicists at JILA on the University of Colorado at Boulder campus have for the first time observed chemical reactions near absolute zero, demonstrating that chemistry is possible at ultralow temperatures and that reaction rates can be controlled using quantum mechanics, the peculiar rules of submicroscopic physics.

The new results and techniques, described in the Feb. 12 issue of Science, will help scientists understand previously unknown aspects of how molecules interact, a key to advancing biology, creating new materials, producing energy and other research areas. The new JILA work also will aid studies of quantum gases (in which particles behave like waves) and exotic physics spanning the quantum and macroscopic worlds. It may provide practical tools for "designer chemistry" and other applications such as precision measurements and quantum computing.

JILA is a joint institute of the National Institute of Standards and Technology and CU-Boulder. A NIST theorist at the Joint Quantum Institute, a collaborative venture of NIST and the University of Maryland, also contributed to the research.

"It's perfectly reasonable to expect that when you go to the ultracold regime there would be no chemistry to speak of," said NIST physicist and CU-Boulder Adjoint Professor Deborah Jin, leader of one JILA group involved in the experiments. "This paper says, no, there's a lot of chemistry going on."

Said NIST physicist and CU-Boulder Adjoint Professor Jun Ye, leader of the second JILA group involved in the research, "We are observing a new fundamental aspect of chemistry — it gives us a new 'knob' to understand and control reactions."

The Science paper is a follow-up to the same research team's 2008 report of the first high-density gas of stable, strongly interacting ultracold molecules, each consisting of two different atoms bonded together (seewww.nist.gov/public_affairs/releases/ultracold_polar_molecules.html). Ultracold molecules are a hot research area because they may offer more diverse insights and applications than ultracold atoms, which scientists have deftly manipulated for more than 20 years.

The JILA research is supported by NIST, the National Science Foundation and the Department of Energy.