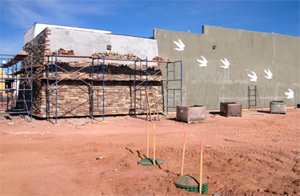 Moab Giants, a $10 million dinosaur museum, is being built about 10 miles north of Moab, Utah. It will feature some specimens from the collection of retired CU Denver professor Martin Lockley, Ph.D.

A dinosaur museum and open-air park is rising from the sandstone bluffs near Moab. Just as he did during a 30-year career at CU Denver, dinosaur footprints expert Martin Lockley, Ph.D., is leaving his imprint on the moon-like landscape of eastern Utah.

Lockley, who officially retired from CU Denver in 2010 but continues research from a basement office in St. Cajetan's, is science director for Moab Giants. The $10 million museum, being built on 45 acres just north of Moab, is expected to open in summer or fall 2015.
It's a testament to Lockley's scientific reputation and the public's fascination with dinosaurs that the "retired" professor is in the spotlight as much as ever. His paleontological discoveries are also currently on display in the yearlong "Steps in Stone: Walking Through Time" exhibit at the CU-Boulder Museum of Natural History—a reprisal of Lockley's CU Denver-based Dinosaur Tracks Museum. Meanwhile, an exhibit of fossilized dinosaur tracks is in the works for where it all started—the CU Denver campus.

While the Dinosaur Tracks Museum might have been relatively small in physical space—it was located in St. Cajetan's basement for 16 years—it was large in stature. The collection, which moved to CU-Boulder in 2012, after Lockley's retirement, boasted some 3,000 specimens from 24 countries. 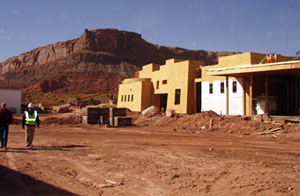 "The College of Liberal Arts and Sciences has realized that this (museum) is part of our history as a campus and wants the exhibit to commemorate the work that was done here," Lockley said. "We've been deeply involved in the dinosaur milieu of Colorado, and we've done it all through tracks research. We're the track people."

Lockley's paleontological partner is research professor Karen Houck, Ph.D., the only other doctoral dinosaur tracker still on faculty at CU Denver. They were core members of the CU Denver-based Dinosaur Trackers Research Group, whose examination of track sites included the near—Dinosaur Ridge near Morrison—and the distant—far-flung fossil sites across the globe.

The triumvirate of exhibits currently underway—a site has yet to be finalized for the CU Denver installation—all spring from the Dinosaur Tracks Museum collection that Lockley, who served as museum director, and Houck assembled over the years. Replicas of their work—castings of actual dinosaur footprint discoveries, including many in Colorado and Utah—are being displayed, or are soon to be displayed, in the high-profile museum exhibits.

Moab Giants will exhibit more than 30 species of dinosaurs, including some replicas from the CU Denver collection. It will showcase tracks of the mighty creatures that roamed Earth millions of years ago, but especially those species found in the Western United States. Moab Giants, and other facilities like it, serve a dual role, Lockley said.

One aspect, naturally, is to be entertaining and solvent. "The other is to be repositories for scientific specimens that belong to the government," Lockley said. "I can't collect these tracks without a permit, which is issued by the state or federal government—whoever owns the land."

Because the surface typically can't be disturbed, researchers prefer to cast rubber molds in order to create replica footprints. In certain cases—such as where tracks are close to falling from a rock outcropping or being covered by spring rains—the entire trackway can be removed.

Meanwhile, the general fascination with dinosaurs just keeps growing. Moab Giants is primarily being built by Polish investors who have experience building dinosaur museums in Europe.

"These are extinct animals that were of mythological proportions," Lockley said. "These animals are not hunting us today, but they were real. It's something for our imaginations to play with."

From Wales to Colorado 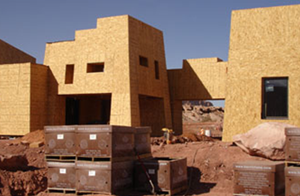 Martin Lockley, a native of Wales, began his research in early marine fossils, but switched to dinosaur track hunting after being hired to teach geology at landlocked CU Denver in 1980. He started with a fossil find in a coal mine near Gunnison, followed by a major dinosaur trackway discovery near La Junta, the latter receiving extensive news coverage—one of the first times CU Denver research landed in the national media spotlight. Anyone interested in seeing the "Steps in Stone: Walking Through Time" exhibit at the CU-Boulder Museum of Natural History has plenty of time. The exhibit runs through Dec. 31, 2015.

The research collection from the Dinosaur Tracks Museum went to CU-Boulder, but many replicas remain in the basement of St. Cajetan's. "I'm holding them here to use as part of the exhibit here (at CU Denver)," he said.

The appraised value of the Dinosaur Tracks Museum, and subsequent fossils added to the collection, is close to $2 million, Lockley said. Part of the value comes from the extensive re-creation of fossils as they appear in their natural state.

"The making of a dinosaur track involves two components—there's the animal's foot and the substrate," Houck said. "Martin does more (scientific work) on the animal and I focus on the substrate. It's a good combination."

Lockley's research environment spans the globe. He recently finished a collaborative research project with Korean dinosaur tracker colleagues. Three years ago, the Korea contingent, interested in exploring a fossil site near Moab, signed a formal agreement with CU Denver to fund the effort and partner with Lockley. The teams have since exchanged replicas of dinosaur footprints found at the site.

Lockley, who has authored hundreds of research papers, has also studied prints left by pterosaurs and birds, ancient mammals and hominins. For his work on the latter, he was recently appointed, along with CU Denver Associate Professor of Anthropology Charles Musiba, to an international team who will oversee creation of a museum in Tanzania to showcase the world's earliest collection of bipedal hominin footprints.

With equal parts whimsy and reality, Lockley says of footprint trackers—both dinosaur and hominin: "You can't get rid of us."

So by late 2015, his work will appear in another museum, this one just across the state border to the west. Lockley keeps his eyes on the next horizon, the next discovery. "We haven't found many mammal tracks from the dinosaur era," he said. "There's always a new frontier."

Tagged with:
College of Liberal Arts and Sciences, research, University of Colorado Museum of Natural History

Harner asks (and answers): What is the essence of Colorado Springs?

Send your thoughts and suggestions for the Newsletter.
END_OF_DOCUMENT_TOKEN_TO_BE_REPLACED