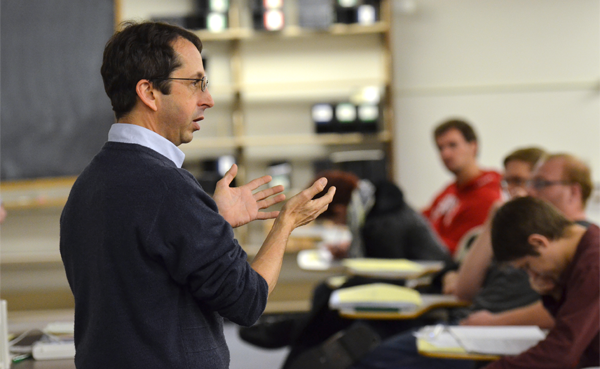 University of Colorado Boulder physics professor Steven Pollock has been named a 2013 U.S. Professor of the Year by the Carnegie Foundation for the Advancement of Teaching and the Council for Advancement and Support of Education.

Pollock is the second CU-Boulder faculty member to win a national Professor of the Year award. Nobel laureate Carl Wieman, also a physics professor, was honored with the designation in 2004.

“We are delighted to again have one of our professors named U.S. Professor of the Year,” said CU-Boulder Chancellor Philip P. DiStefano. “Steven Pollock’s work is a credit to him, our physics department and the dynamic teaching and research of our entire faculty.”

The U.S. Professor of the Year awards recognize the most outstanding undergraduate instructors in the country. Each year, a professor is chosen from four institutional categories.

Pollock, who is being honored in the category of doctoral and research universities, was chosen from a field of more than 350 distinguished nominees from across the country.

Pollock began teaching at CU-Boulder in 1993, when he took a job as an assistant professor in the field of theoretical nuclear physics. Over the last two decades, he has taught the full range of physics classes available to undergraduates, from introductory level courses, including the Physics of Sound and Music, to upper-division classes for physics majors, such as Principles of Electricity and Magnetism II, which he is instructing this semester.

“I care a lot about every student in my class, from introductory non-majors to advanced students,” Pollock said. “Some of them start out dreading physics, and it’s a real pleasure watching them turn on to the topic. It’s wonderful to help people see that physics is about their life, that physics is relevant to their future, that it’s interesting, a powerful way of examining the world around them, and that they can do it.”

Pollock says his teaching philosophy is rooted firmly in using strategies that have been proven to work. “Whenever possible, we should use evidence-based research to support whatever we do in class,” he said.

Pollock’s passion for teaching has overflowed into his research career—he now studies the effectiveness of different pedagogical techniques, especially in upper-division physics classes—and has earned him numerous teaching laurels.

Pollock received the Chancellor’s Award for Excellence in STEM Education, Innovation and Research in 2009; the CU President’s Teaching Scholar award in 2008; the Sigma Pi Sigma Favorite Physics Professor award multiple times; CU-Boulder’s Best Should Teach gold award in 2006; and the Boulder Faculty Assembly Teaching Excellence Award in 1998, among others. He became a Pew-Carnegie National Teaching Scholar in 2001.

“The people who created the culture that teaching is important were the legends in this department’s history, like Al Bartlett, George Gamow, Jack Kraushaar and John Taylor,” said Professor Paul Beale, chair of the physics department. “They conveyed to the young assistant professors that teaching is rewarding, valued and appreciated.”

Pollock is being honored today at a luncheon at the Ronald Reagan Building and International Trade Center in Washington, D.C.

This year, a state Professor of the Year award also is being given in 36 states. CU-Boulder has been honored with three state winners in previous years: physics Professor John Taylor in 1989, chemical engineering Professor Klaus Timmerhaus in 1993 and anthropology Professor Dennis Van Gerven in 1998.

CASE and the Carnegie Foundation have been partners in offering the U.S. Professors of the Year awards program since 1981.

The Carnegie Foundation for the Advancement of Teaching is an independent policy and research center that supports needed transformations in American education through tighter connections between teaching practice, evidence of student learning, the communication and use of this evidence, and structured opportunities to build knowledge.

Headquartered in Washington, D.C., with offices in London, Singapore and Mexico City, the Council for Advancement and Support of Education is a professional association serving educational institutions and the advancement professionals at all levels who work in alumni relations, communications, fundraising, marketing and other areas.