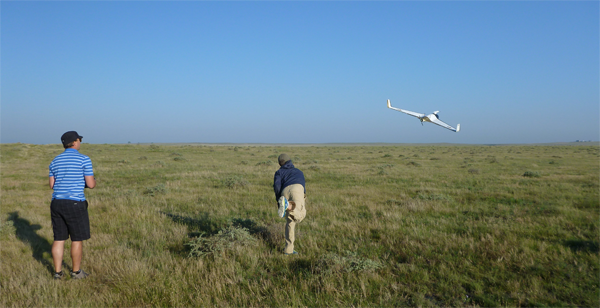 An international team of scientists and students led by CU-Boulder used multiple unmanned aircraft to simultaneously intercept the outflow of a thunderstorm at Colorado’s Pawnee National Grasslands earlier this month. Such data should help scientists better understand extreme weather tied to tornado activity. (Photo courtesy of Jack Elston/University of Colorado)

An international research effort organized by the University of Colorado Boulder conducted the first multiple, unmanned aircraft interception of a telltale rush of cold air preceding a thunderstorm known as a “gust front” as it rolled across the Pawnee National Grassland in northeast Colorado on Aug. 14.

Organized by CU-Boulder’s Research and Engineering Center for Unmanned Vehicles, or RECUV, the effort also involved the University of Nebraska-Lincoln, Texas Tech University, Colorado State University, the University of Tübingen in Germany and the Center for Severe Weather Research based in Boulder. A gust front is a boundary that separates a cold thunderstorm downdraft from warm, humid surface air, which is of interest to scientists because it can generate damaging wind speeds up to 100 miles per hour.

“We believe this was the first time multiple unmanned aircraft systems were flown simultaneously to make coordinated measurements of the outflow from an evolving thunderstorm,” said CU-Boulder postdoctoral fellow Jack Elston.

Elston is the principal investigator and organizer of the National Science Foundation-sponsored Multi-sUAS Evaluation of Techniques for Measurement of Atmospheric Properties field experiment, or MET-MAP. RECUV is a university, government and industry partnership headquartered in the aerospace engineering sciences department.

According to RECUV Director Eric Frew, a professor in aerospace engineering, MET-MAP was organized to coincide with the August deployment of a U.S. Air Force Office of Scientific Research project known as EA-DDDAS. “The focus of EA-DDDAS is to develop a smart, small unmanned aircraft system that can plan its own flight path to maximize endurance by combining real-time weather-radar and atmospheric-model data with measurements made from the aircraft,” said Frew.

“The challenge is to move this information into high-speed computations that instruct the autopilot where to fly the best path to achieve the mission objectives,” he said.

As the gust front approached from the west Aug. 14 at Pawnee National Grassland, three UAS teams spread out about a quarter of a mile from each other along Weld County Road 69 near Briggsdale and launched three small, unmanned aircraft, including a Datahawk and two Skywalkers, all with wingspans of less than 5 feet.

In addition to the Pawnee National Grassland testing event Aug. 14, a group from CU-Boulder’s Cooperative Institute for Research in Environmental Sciences led by Associate Professor John Cassano flew four unmanned aircraft Aug. 8 at NOAA’s Boulder Atmospheric Observatory, a tall tower near the town of Erie northeast of Boulder. The flights were conducted to compare the UAS measurements for wind, temperature, pressure and humidity with those made by instruments attached from the top to the bottom of the 1,000-foot-high tower.

On Aug. 11 the RECUV and CIRES teams deployed the four unmanned aircraft at the Pawnee National Grassland for several flights that started at sunrise, believed to be the first multiple unmanned aircraft flights ever to capture profiles of an early morning atmospheric inversion. The four UAS teams were separated by approximately two miles, allowing them to simultaneously sample the atmosphere above different types of terrain, including ravines and surrounding higher terrain.

“The long-term objective for RECUV is to bring engineers together with atmospheric scientists and meteorologists to develop unmanned systems for low-cost, low-risk data collection with high science return,” said Elston. The unmanned aircraft deployments at the Pawnee Grassland concluded Aug. 19.

CU-Boulder may have more experience flying science experiments with UAS than any other research group in the world, said aerospace engineering Professor Brian Argrow, co-founder of RECUV. CU-Boulder UAS projects have included monitoring seal populations in the Arctic and charting sea ice changes near Greenland to intercepting storm cells associated with tornadoes in Colorado, Kansas and Nebraska and measuring holes in Antarctic sea ice known as polynyas associated with offshore winds.

There is a lot of public misinformation floating around about the uses of unmanned aircraft, spurred in part by the use of military drones in the Middle East, said Argrow. “Our UAS are specifically used for science and engineering activities, and our interests lie in tackling some of the biggest science issues today, often in remote places where it is impossible or cost prohibitive to gather data using other methods,” he said. “I am really looking forward to getting back into the field for more supercell storm research with our meteorologist colleagues.”

Frew and Argrow said developing instruments and unmanned aircraft requires multidisciplinary approaches – combining aspects of both aerospace and computer science, for example – which has led to a new model of education in CU-Boulder’s engineering college. While it used to be standard to have a single faculty adviser for multiple students, the breadth of information required for designing, developing and flying UAS with sophisticated sensors now may include multiple faculty advisers from different departments for a single student.

Send your thoughts and suggestions for the Newsletter.
END_OF_DOCUMENT_TOKEN_TO_BE_REPLACED