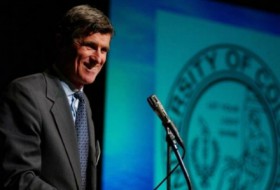 Photo: Casey A. Cass/University of Colorado

David Getches, dean of the Law School at the University of Colorado at Boulder, has announced that he intends to resign as dean effective June 2011.

Getches, who will stay at CU-Boulder as a law professor, said he is "eager to return to teaching and research." Now in his eighth year as dean of CU-Boulder's law school, Getches announced his resignation to the faculty Aug. 20.

"I have reached this decision with confidence that the Law School is on a solid footing," Getches said. "With the support of alumni, faculty, staff, students and donors, we have many achievements that distinguish Colorado Law among the nation's best law schools."

Interim Provost Russell Moore will appoint a search committee for the position by the end of September.

"Dean Getches forever left his mark by guiding the Law School into a new era and into the state-of-the-art Wolf Law Building," Moore said. "I am very pleased we will be able to retain his vast expertise in water, natural resources and Indian law as a continuing member of our faculty."

An active fundraiser, Getches has helped raise $28.5 million in donations, increasing the law school's endowment 80 percent since 2003. The increase in fundraising allowed Getches to fulfill one of his primary initiatives, to significantly increase the number and amounts of law student scholarships to attract the most promising students, regardless of financial capacity.

In 1970, he became the founding executive director for the Boulder-based Native American Rights Fund, a national, nonprofit Indian-interest law firm. From 1983 to 1987, he was executive director of the Colorado Department of Natural Resources under Gov. Richard D. Lamm. The department is responsible for the operation of 10 divisions of state government that deal with parks, wildlife, land, water and minerals. In 1996, he served as special consultant to the secretary of the U.S. Department of the Interior.

Send your thoughts and suggestions for the Newsletter.
END_OF_DOCUMENT_TOKEN_TO_BE_REPLACED