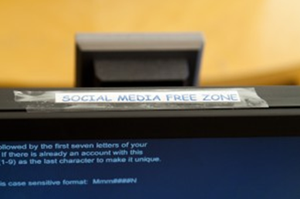 As of Friday, two of the circles of 11 computers, known as pods, began offering Internet access and other features students need to use, but not Twitter, Facebook, Google+ or other social media with potential to be distracting.

Rory Lewis, assistant professor, Computer Science Department, serves as chair of the UCCS Faculty Assembly Library Committee. Lewis noticed lines of students waiting to use library computers at exam time. Forced to wait 20-30 minutes to use a computer, the waiting students were angry so many computers were being frivolously tied up on social media sites.

Creation of social media-free zones seemed to be a solution. Lewis said the time students spend on the computers in the pods will be tracked and compared to their use a year ago. He is convinced, however, that the need for the zones is quite real.

Before today’s extensive technology, a student could study at a library table and only be interrupted if someone physically approached the table. This is no longer the case.

“With the new technology, you are in constant contact with all your friends,” Lewis said.

A student may attend college anywhere in the world but stays connected to high school pals through email and texting. Friends from clubs, dance class or camp remain in touch as well, joined by a host of new acquaintances in person and online. The student is inclined by social convention to acknowledge them.

“It’s like all 4,000 of your friends are surrounding your library table,” Lewis said.

And the problem is not just distraction, but addiction.

It isn’t unusual for a student, professor, businessman or anyone to spend time checking emails and messages, then responding. Scheduling a specific block of time for this activity keeps it under control, he said, but students have confided in Lewis that they may spend hours doing this, taking time originally intended for study.

Lewis said some of these engineering and computer students are among the most self-disciplined individuals he ever encountered. If the temptation affects this group, it’s an even bigger problem for less-disciplined students. He cited research that compares extensive use of electronic technology to narcotic dependency and made the argument for treating the social media phenomenon as an addiction for some.

Lewis even plans using the tracking data as research to be included in neuroscience papers and library science papers. This may prove useful to other institutions, he said. If the problem exists at UCCS, other schools face it with their own students.

He said he expects complaints from students for and against the pods. Some will argue the library needs to offer more computers without the distracting sites, while others will say all computers should feature access to all the Internet. Yet 80 percent of the library computers will still offer full access, so the quiet zones will remain for the foreseeable future.

Students attempting to access social media sites from the pods will reach a site outlining the purpose of the social media-free zone. The site may be viewed at http://www.uccs.edu/~socialmediafree/.

Send your thoughts and suggestions for the Newsletter.
END_OF_DOCUMENT_TOKEN_TO_BE_REPLACED