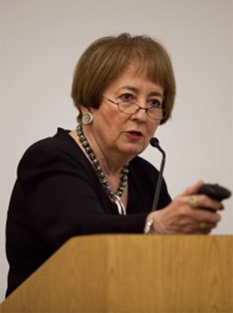 Chancellor Pam Shockley-Zalabak provided an optimistic look at the university’s future on North Nevada during a Feb. 18 capital construction update.

According to Shockley-Zalabak, construction on what is currently being called “Building 2” will come along much earlier than expected thanks to the City For Champions proposal.

“That is simply because we have now received $16.8 million allocation from the regional tourism act,” Shockley-Zalabak said. “The rest of the building ($10.2 million) can be done with lease revenues from people wanting to be in the building and working with our faculty and staff.”

When asked by a faculty member how the university could justify using tourism dollars to fund the building, Shockley-Zalabak explained that the funding was for medical tourism, not tourism in the sense of individuals coming to Colorado Springs to see the beautiful UCCS campus.

“We did a very thorough analysis of clinics of this type, and there are four clinics that are doing similar things to what’s being proposed here,” Shockley-Zalabak said. “You look at the size of the building, number of patient visits and you do an estimate on the number of out of state patients.”

According to the university and economic development studies, it’s estimated that 30 percent of patient visits would likely come and have to stay overnight in a hotel, go out to eat and patronize community businesses.

“It is how UCCS founded in this community with tuberculosis and asthma,” Shockley-Zalabak said. “That is medical tourism.” 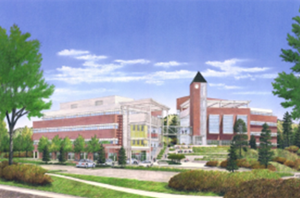 An artist’s rendering of the Lane Center and Building 2

Building 2 will be an interprofessional sport medicine and sport science facility for high-performance athletes with a specific focus on impaired athletes. UCCS faculty and students will work with private clinical practices that specialize in high-performance athletes to create a unique facility focused on education, research and clinical practices.

A feasibility study is underway to examine two potential locations, one site directly north of the Lane Center, the other adjacent to the southeast. But first, the building needs a name.

“That is not an exciting name, right?” Shockley-Zalabak said. “It’s because some of you are going to have the opportunity to name Building 2 in our new entrepreneurial world. This could be the Nina Gomez Sports Medicine and Performance Center.” 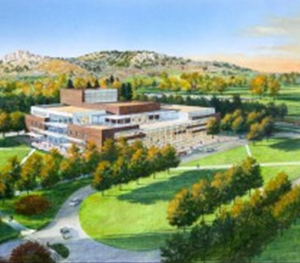 An artist’s rendering of a new visual and performing arts building.

Alongside Building 2, the Visual and Performing Arts Complex is in design phase. The building will house five venues, plus educational space, including the Gallery of Contemporary Art, Dusty Loo Bon Vivant Theatre, Osborne Studio Theatre, a 250-seat recital hall, and a 750-seat community theater and lecture hall.

Funding for the $58 million complex is underway. Last year, UCCS received $4.7 million for planning from the state of Colorado. Another $13.3 million was requested this year and was included in Gov. John Hickenlooper’s proposed budget, with another $9 million requested from the state. Another $10 million has been allocated from the CU system President’s Initiative Fund. According to Shockley-Zalabak, the remaining $10 million will come from philanthropic support.

“Interesting enough, we’re doing pretty well,” Shockley-Zalabak said. “I expect to be able to report to the Legislature by the end of March that we’ve probably got 60-70 percent of that committed.”

Shockley-Zalabak hopes to break ground on the complex in 14 to 16 months.

Several other projects were discussed in overview, including: