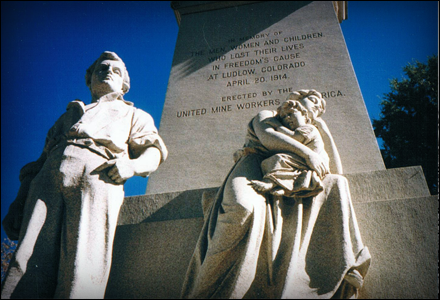 In southern Colorado on April 20, 1914, fighting broke out between a camp of striking coal miners and an alliance between the Colorado Fuel and Iron Company and the Colorado National Guard. In the end, at least 18 miners and their family members were dead. The event galvanized national efforts to promote higher labor standards and social justice in the early 20th century. Many modern-day labor laws can trace their origins to what is now known as the Ludlow Massacre.

This month, the University of Colorado Anschutz Medical Campus commemorates the centenary of the Ludlow Massacre with a series of events, including a reading on April 22 of the award-winning verse novel “Ludlow,” by David Mason. Mason is professor of English at Colorado College and the state’s first poet laureate. Selected arias from the opera “Ludlow,” by Mason and Lori Laitman, will follow the reading, with soprano Amanda Balestrieri, tenor Steven Soph and pianist Robert Spillman. The unique event is sponsored by the Colorado School of Public Health’s Center for Worker Health and Environment, the University of Colorado Anschutz Medical Campus Health Sciences Library, and the Center for Bioethics and Humanities.

Complementing these events from April until June, the Health Sciences Library is featuring the exhibit “Holding Mother Earth Sacred,” a photojournalism essay about North American tribal communities engaged in energy resource development. According to Library Director Jerry Perry, "One of our missions is to connect the campus and community with our intellectual history. The Ludlow Massacre changed Colorado and the nation, and it changed our thinking about occupational health and safety. The library's exhibit reminds us that energy is a key part of our state's legacy and, with hydraulic fracturing, potentially its future."

One of the primary objectives of the miners’ strike in 1914 was to stem the tide of preventable injuries, illnesses and deaths caused by unsafe working conditions below ground. “In the early 20th century, mining was substantially more dangerous than it is today. Remembering the bravery of the striking Ludlow miners reminds us that miners still face preventable injury and illness in the course of their work,” says Cecile Rose, M.D., MPH, Occupational Medicine physician at National Jewish Health and professor in the Colorado School of Public Health and School of Medicine. Rose works with coal miners throughout the region and notes that while progress has been made, we still have a long way to go to protect the health and safety of miners and other workers. “The Upper Big Branch Mine disaster is just one example of history repeating itself. We’ve also witnessed an increase in coal mine dust lung diseases in recent years, including a rapidly progressive and virulent form of Black Lung. Tragic events still occur, and we need to redouble our efforts to prevent them.”

The Colorado School of Public Health’s Center for Worker Health and Environment promotes healthy and safe workplaces through education, research, public health practice and community partnerships. “We consider this commemoration of the coalfield wars to be an important way to remind people of the debt we owe to previous generations of Colorado workers, their families, and the U.S. labor movement,” said Center Director and Professor, Lee Newman M.D., MA. “Our center’s mission is to help our region by serving as a gathering place for employers, unions, academics, and government entities to work together to make the region the healthiest and safest place to work.”

To learn more about the center and other events honoring the legacy of Ludlow, visit http://bit.ly/1iO77Sx.

Mason’s reading and reception are made possible through a grant from the University of Colorado’s President’s Fund for the Humanities as well as generous donations from The Harold E. Hollis Trust and WorkSafe Colorado.

Board of Regents to meet virtually today for coronavirus update

Send your thoughts and suggestions for the Newsletter.
END_OF_DOCUMENT_TOKEN_TO_BE_REPLACED