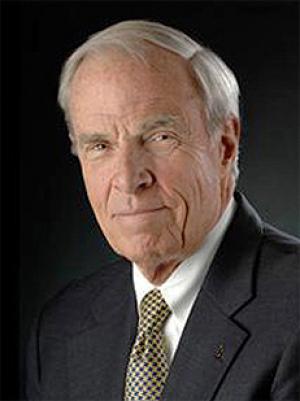 President Bruce D. Benson emphasized teamwork and collaboration during his university update to members of the University of Colorado Staff Council during its regular monthly meeting Feb. 12 at CU Denver’s Business School.

Within the university community, Benson said he is working to remove silos, push campuses to nurture many points of view and robust discussions, and encourage joint marketing and fundraising efforts. He’s also pushing for collaboration between the university and the general community in order to develop more opportunities for youth to obtain an education and more sources for funding.

“All of us in higher education need to work together” because the state has drastically reduced the amount of funding that goes to institutions, he said. To remain viable, the university wants to develop new sources of funding, especially for research, which, because of possible federal budget sequestration, may lose even more money in upcoming years. Benson said that, along with considering all types of revenue-generating programs, university officials also are discussing the idea of introducing a ballot initiative that would provide money for CU’s labs and researchers.

At the same time, he said, America needs to ensure that youth get the best education possible before entering college. In Hong Kong, for instance, “parents talk about what kindergarten their children get into, not what college they want them to attend.”

The president said he is happy with efforts so far to introduce all types of thought into the university process. He mentioned the Visiting Scholar in Conservative Thought and Policy, now in its second year. He also mentioned other ways to create dialogue, including possibly team-teaching selective classes in order to air varying ideas. He also praised John Griffin, the director of the Conference on World Affairs, who he said has excelled at bringing together many voices for the upcoming April event.

He also gave kudos to CU-Boulder’s Rick George, whom he called a “world-class athletic director” for building a good business model for the sporting side of the university, and praised efforts by a reorganized fundraising operation to combine efforts to raise his goal of $4 million a year.

Other university goals include:

In other business, CU Staff Council members continue to gather information about tuition benefits and professional development programs at other universities across the nation in order to compare to current CU benefits.

Members contacted higher education institutions at random and found a variety of benefits. For instance, Arizona State University pays 100 percent of tuition costs for employees. At Washington State University, employees pay a $5 fee for up to six credit hours, except for dissertation credits. The University of Iowa holds a lottery for tuition benefits after a 100-year flood damaged much of the campus and money was diverted from other areas into restoring buildings. In Texas, a state training act helps employees get funding for tuition and development needs.

Council members will continue to contact other institutions as well as learn more about what CU offers before determining council’s next step, which might include recommending a policy for development standards. The Faculty Council already is working on a refined tuition benefit proposal that would offer more equity across the campuses.

In other matters, Tricia Strating, council vice chair and a member of the Staff Council’s policy committee, said that only one of several policies currently under review for a proposed July implementation – and which are being tracked by council – has been red-lined and posted to the Office of Policy and Efficiency website for viewing. Governance groups, including the staff council, provide input on the policies, including revision suggestions. Council members have complained that, in some previous instances, they have not had enough time to discuss changes with constituents and campus councils, thereby allowing for substantive comment before the policies are implemented. Council members agreed that the group would recommend that policy implementation be postponed if employees and the council were not given enough time to thoroughly review a policy and make recommendations.

Strating noted that the parental leave policy (APS 5019), has important implications for staff on all campuses, and is one that council has previously targeted for change. Currently, campuses follow their own rules or revert to Colorado state policy to allow employees time off for school activities or volunteering. The council would like policies to be consistent on all campuses.

The other policies that council is tracking for review are APS 5014 (sexual harassment and sex discrimination), APS 5015 (amorous relationships) and APS 5024 (tuition benefit).

Council members also reviewed candidate applications for Service Excellence Awards. Winners of the award, which recognizes exemplary volunteer efforts by employees on campus and in the community, will be announced at the council’s April conference.

Tagged with:
benefit, Office of Policy and Efficiency, Staff Council

Send your thoughts and suggestions for the Newsletter.
END_OF_DOCUMENT_TOKEN_TO_BE_REPLACED