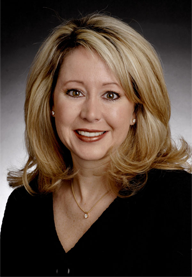 Kelly Cronin’s career in fundraising began by accident. While working as a schoolteacher, she answered an ad for a director of development position for a parochial school in El Paso, Texas, thinking the position was focused on child development.

When the hiring authority began asking her questions about fundraising, she replied, “One of us is in the wrong interview.”

It turns out she was in the right place after all, and was hired for the fundraising job. It launched her into a career she came to excel at and love. The next chapter in her career will be at the University of Colorado. CU President Bruce Benson on Wednesday named Cronin vice president for advancement. She will oversee CU’s fundraising operations and help facilitate the ongoing transition of CU Foundation fundraisers and support staff to the university. She begins her duties Sept. 1.

“Kelly is a dynamic leader with great experience and an impressive track record of fundraising success,” Benson said. “She is going to help our university build on our fundraising success and allow us to attract private support at a level comparable to the top public universities in the country.”

Cronin has been vice chancellor of institutional advancement and chief executive officer of the Texas Tech Foundation Inc. since 2007. She has worked at the university in fundraising for the past decade. Under her leadership, contributions to the Texas Tech system doubled, from $74 million in 2006 to more than $150 million in 2011. She led Texas Tech’s systemwide $1 billion capital campaign, which concluded a year ahead of schedule. She was also responsible for solicitations that resulted in more than $200 million in recorded gifts, including a cash gift of $50 million from one donor.

“I’m thrilled to have the opportunity to join the team at the University of Colorado. It’s a great institution with world-class people and programs, and it is well-positioned to move to the next level in private support,” Cronin said.

She met with several CU constituents in recent days and weeks, including members of the Board of Regents, leadership on the four campuses, faculty and staff leadership, fundraising staff and volunteer fundraising leadership, and the president’s executive staff. Benson said he interviewed four finalists for the position, but Cronin emerged as the clear choice.

“She fully understands fundraising and that we have to raise the bar at CU,” he said. “I have received unanimously strong support from all the CU groups she has met with, as well as strong endorsement from those she worked for and with at Texas Tech.”