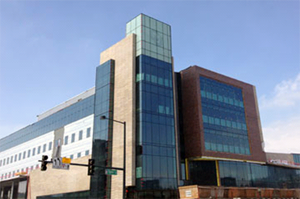 It’s still a few months from opening, but already the accolades are pouring in for the University of Colorado Denver Academic Building.

In its Best of Denver 2014 edition, Westword named the Academic Building under construction at the intersection of Speer Boulevard and Larimer Street "Best New Building in Denver." The building, which is five stories on the Larimer side and two stories along Speer, drew praise for its design touches and strong connection between downtown Denver and the Auraria Campus.

"Its mass is very complex and its materials rich and varied. And although Auraria's standard red brick is carried out in the tower block, the more dazzling white stone that covers much of the lower floors is more eye-catching," Westword wrote. "Prominently situated at the northwest edge of the campus, it provides a gateway that links Auraria to the rest of downtown."

The building was designed by Anderson Mason Dale Architects, which employs several architects who graduated from College of Architecture and Planning at CU Denver. They include Andy Nielsen, one of the Denver firm's four partners; Cynthia Ottenbrite, a project architect on the Academic Building; as well as Dan Williams and Stephan Hall, who are architect interns and have been involved on the project.

"We feel very strongly connected to the university," said David Pfeifer, a partner at Anderson Mason Dale Architects. "I'm very happy that the building is getting this kind of recognition, mostly because the administration has been unbelievably supportive to create a building that will become a home for the university on the Auraria Campus. It's been a pleasure to work on it in that regard."

Pfeifer said university leadership is to be commended for including a "generous amount of public space" in the building, including in the cafe area and the Speer gallery—large gathering areas outside the main lecture halls that are visible through the glass walls along Speer. Pfeifer said his work as lead principal on the project has been done in lockstep with design principal Joey Carrasquillo.

The main contractor on the 156,400-square-foot building – which will provide one-stop-shop student services, including student affairs, admission, disability and financial services – is Saunders Construction. Jordan Dame, a Saunders employee who worked on the proposal phase of the Academic Building project, is also a CU Denver alumnus.

Cary Weatherford, senior institutional planner, Office of Institutional Planning, said the three design directives of the new building were: bring some of Larimer Square's character onto the Auraria Campus, reach out into downtown Denver, and maintain views of the Tivoli Building. Also, "the tower is an important design element" at the corner of Speer and Larimer, Weatherford said. "The tower has conference rooms from the second floor to the fifth, punctuated by the frosted glass section at the top that will be illuminated at night."

Weatherford noted that the building's exterior palette features the red brick that is prominent across Auraria, but also features limestone and aluminum panels that are unique to the campus. The award from Westword is gratifying, he said, especially since the building won't even open until this summer.

"It's pretty amazing for building that's not even open yet," Weatherford said. "That's pretty cool. I think it's a great design. Anderson Mason Dale has done a great job."

Send your thoughts and suggestions for the Newsletter.
END_OF_DOCUMENT_TOKEN_TO_BE_REPLACED