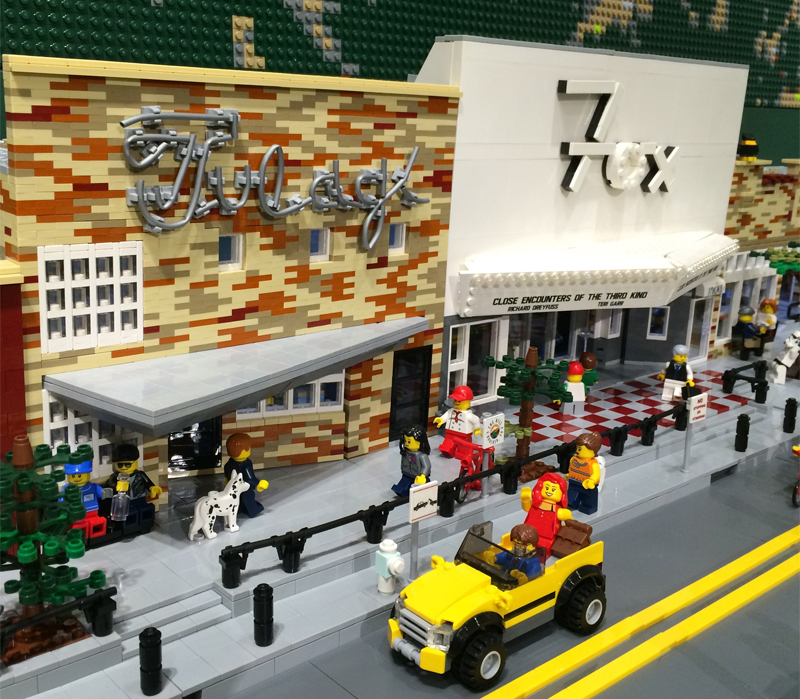 There’s a light show at Fiske Planetarium and Macky Auditorium is open for viewing. Up on University Hill, people dressed as Luke Skywalker and Darth Vader mill around the lobby, waiting for the “Star Wars” film to begin. The Sink is packed with hungry, thirsty, boisterous customers. The Buffs and their opponents are getting ready for a football showdown.

It could be any Saturday night at CU-Boulder -- except for the Space Shuttle poised in front of Folsom Field.

NASA’s spacecraft and the other university landmarks are miniature depictions of the real things and are new additions to the CU Heritage Center’s “Hit the Bricks!” exhibit, the campus made entirely of Lego bricks. The updates were built to celebrate CU’s homecoming in mid-October; subsequent enhancements to the exhibit will be made each year as part of homecoming week, said Allyson Smith, center director.

This year’s additions pay homage to the past and present. University Hill’s main street is a look back to 1977, when the first “Star Wars” film drew crowds to the historic Flatirons Theatre and students danced at Tulagi’s nightclub. The Rolling Stones can be seen performing at Folsom Field in 1981. Fiske’s longtime light show illuminates the building’s translucent roof.

The Space Shuttle, along with a large MAVEN (Mars Atmosphere and Volatile Evolution) space probe, were included in the exhibit as a nod to the university’s contributions to space exploration and the recent monthlong series of space and Earth-science activities that ran from mid-September through mid-October.

The “Bricks” exhibit has doubled the number of visitors to the center, said Smith, and she expects more than 45,000 people to step through the doors this year.

Further expansions of the display, designed and built by members of the Colorado/Wyoming Lego Users’ Group (COWLUG), may require a move into a larger gallery where viewers can walk around the perimeter of the model, which now contains 1 million pieces and weighs hundreds of pounds. 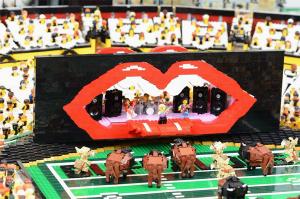 The Rolling Stones' 1981 concert at Folsom Field draws a crowd of Buffs.

Visitors can take home one of the most-revered university icons in Lego form: Ralphie, the CU-Boulder mascot. During the past year, about 850 you-build-it Ralphie buffalo Lego kits have been sold. The $20 kits are a limited edition. Beginning in December, a limited-edition MAVEN kit will be sold for $45.

The center’s Space Exploration Gallery also has been updated with panels depicting the stories of CU’s 20 astronauts, including School of Medicine alumnus Kjell Lindgren, a doctor certified in emergency and aerospace medicine who is currently aboard the International Space Station. “The panels provide a unique look into their NASA training and missions,” Smith said.

The gallery also contains a moon rock, an Apollo 14 command module suit worn by Stuart Roosa, and astronaut Jack Swigert’s watch and outfit from the fateful Apollo 13 mission. CU also has on display the cap Swigert was given when he and the other two crew members were rescued and brought aboard the USS Iwo Jima after an explosion curtailed the moon mission.

A football and engineering flag that CU astronaut Ellison Onizuka took aboard the Space Shuttle Challenger, which exploded just 73 seconds after launch in 1986, were recovered from the crash site in the Atlantic Ocean and returned to CU, and can be viewed in the gallery.

The Heritage Center is on the third floor of Old Main and is open 10 a.m. to 4 p.m. Monday through Saturday; admission is free. For more information about programs and exhibits at the center, call 303-492-6329 or visit www.cuheritage.org.