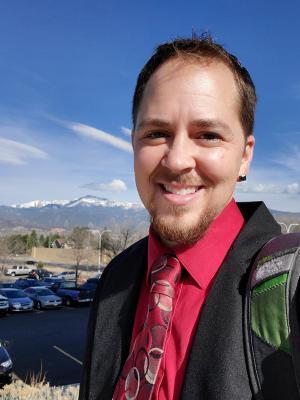 While earning a bachelor’s and master’s degree in sociology from the University of Colorado Colorado Springs, Tre Wentling developed strong connections to the university and to the faculty and mentors who guided him.

After earning his Ph.D. as well as a Certificate of Advanced Studies in Women’s and Gender Studies at Syracuse University, he returned to UCCS in 2018 as an assistant professor in Women’s and Ethnic Studies (WEST). He said he is excited about the prospect of giving back: inspiring and encouraging and taking an interest in students.

“I’ve experienced tremendous growth over the past few years and there are some core experiences that I share with students,” he said. “I really see myself as belonging to the institution. WEST is such a unique, dynamic and important program. There is a promise that research can save lives and that it certainly impacts policy and ways of existing.”

Sociology and the academy gave him a different type of access to language and scholarship, he said, as well as his own sense of identity about race, gender and as a child dependent of the U.S. Air Force.

“Learning about scholarship that recognized my own embodiment helped me to expand and really stretch what I thought. That was affirming, and I want to share these things with students who are equally as interested in learning about themselves and the social world that has informed so much of who they are and how they exist in that world.”

Much of his research focuses on diversity and equity, including queer and transgender life.

In what he considers a “pause to the realities of life stressors, inequality and violence,” he enjoys West Coast Swing dancing. The dance form’s roots are the Lindy Hop and Charleston, popularized by Black dancers in Harlem, New York, and has been influenced by more contemporary forms of dance and music.

“The music, movement and social connections are really communal and soulful. Dancing refuels me,” he said. It has also made him interested in the de-gendering movement that’s underway in West Coast Swing, which will be his next area of study.

1. You created some new transgender and gender-identity courses at UCCS. Why did you believe these courses were necessary? 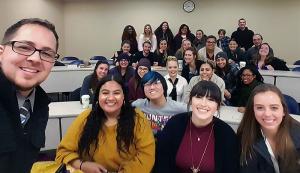 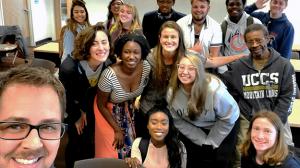 I proposed two different courses that were approved for spring 2020. One is “Trans Studies: Fluidity, Politics and Identity.” I know that some students will see themselves in the curriculum and that will be life-giving. I have several questions that will frame the course, which in part were inspired by Time magazine’s 2014 cover that featured Laverne Cox – a black transwoman activist performer and star of the Netflix series “Orange Is the New Black.” The headline read, “The Transgender Tipping Point,” and I’m asking, how did we get there? While there seems to be a lot of media representation now, and what I consider to be cultural producers like Cox, Caitlyn Jenner, Chaz Bono and others, the question is, what do they make both visible and invisible? And what do they teach us about race, gender, class and sexuality? The other question is about this idea of “transgender” and what the world views, approaches and perspectives are that have given us language and ideas about transgender phenomenon.

I want WEST to stay on the cutting edge. Across the nation, other universities and colleges offer trans-studies courses. The field is new, and we want to stay current and relevant. I direct our gender and sexualities studies certificate, and so both proposed courses will support those students interested in continuing their learning and advocacy in this substantive area.

I am very excited about the trans studies course and have students who already have said they hope to be enrolled in it. Some students will be more like tourists, as I call them, whereas others will consider themselves allies in the promotion of awareness, advocacy and dignified understandings of trans life.

2. You also are a faculty member of the Knapsack Institute. What is the mission of the institute and what was your role in this year’s June 6-8 session?

The institute was formed in 2005 and the mission is to bring together educators, folks working in nonprofit organizations and other contexts to increase understanding and share resources that help them navigate discussions and practices, and maybe even rewrite policy, around diversity and equity.

We also make sure to frame our work in intersectionality. Even with an intended promise of inclusion, it won’t work unless you also think about race, class, gender, age, sexuality and age simultaneously.

The institute is a three-day event and to be involved is really a gift. This year, I was a co-organizer with three others who are also vital mentors of mine and have long been a part of my journey and growth.

I offered an introductory session about Lesbian, Gay, Bisexual, Trans, Queer+ terms. The other session I offered was called “Teaching transgender,” with a much narrower look at classroom practices and curriculum such that trans scholars are centered, and transnormativity as a system is interrogated.

3. Your research also deals with transgender individuals and policies that regulate identification documents. What has your research uncovered?

My research concerns how individuals of transgender experience navigate federal, state, and local infrastructure related to IDs and records because each level of governance has different administrative rules on how to amend them. In this way, these systems create a kind of legal precarity, and if you think about it in this framework, my research also is about citizenship.

In addition to 882 surveys, I interviewed 50 participants about their reasons for amending IDS and records and their experiences in doing so. One young person told me about his experience when he went to the Department of Motor Vehicles with a court-ordered name change. As he walked out of the office, he immediately realized that his gender marker had been changed back to the one assigned to him at birth, even though he had previously amended this with another state agent according to the appropriate documentation. He returned to the agent who amended his name and told her there was a mistake. She said, “I saw the name given to you at birth, and even though you have these documents, I changed your marker back to what it was.” It’s this kind of individual-level gatekeeping folks must navigate.

At the institutional level, consider this experience from a retired public-school teacher. In a post-retirement job interview, she was told by the potential employers she had falsified her application. It turned out that her alma mater did not update her name change even though she had requested they make the appropriate updates. When she spoke with a university employee about this, they told her that her transcript information was archived on microfiche and they didn’t know how to change it. Meanwhile because of the mistake, she was perceived as a fraud and lost a great employment opportunity.

In yet another example, a young person told me about how their gender broke the computer. In the university application, they wrote about their identity and what it meant to them. Presumably, while reading the application, a well-intentioned university employee changed the sex marker. The student wasn’t receiving financial aid as expected. After visiting financial aid and admission and records offices multiple times, the student realized that it was because the sex marker had been changed from “F” to “M.” In the United States, to be eligible for federal aid, a person sex-assigned male at birth must register for selective service. This student certainly wasn’t registered nor would they ever be expected to. In this case, this student’s first semester at university included not having money for books or food.

I am looking at all these things: why people want to change documents, their experiences amending them, and the precarity of having mismatched IDs and records entangled in federal and state surveillance systems that cross-check IDs and records looking for these very mismatches.

4. As you noted, the past few years has seen some movement forward for LGBTQ+ rights and women’s issues, but also some huge steps backward. How has this affected the national discourse and attention?

At this year’s Knapsack Institute, we had 41 participants, including a few from a military installation. It was pretty heart-wrenching to hear how they had been proactively creating a process for incoming trans cadets but were obviously upset with the current administration’s ban on people of transgender experience serving in the military. They said they were going to continue to set up the infrastructure for when the ban dissolves, which was great to hear.

Every other day, it feels as if there are activists and organizations across the United States working hard to put pressure on lawmakers. In Colorado, for example, residents can get a driver’s license that is nonbinary, and the Legislature just banned conversion therapy for youth. There are some great processes being codified that extend protection at local levels, but at the federal level right now, we don’t see that.

Has activism surged? I think for a long time, advocates and people with trans experience have been fighting for dignified recognition and legal protections. But there still are big issues. The trans community faces incredibly high unemployment and there are folks who are transient and homeless. It is the sixth month of the year and 13 black transwomen have been murdered to date. Intersectionality illustrates how vectors of oppression make transwomen of color more visible and vulnerable based on racism and sexism. Their deaths are not making headlines.

5. Has your academic work extended into the community?

I’m currently part of a collective that is updating the Colorado Coalition Against Sexual Assault’s (CCASA) training manual. Sexual assault and rape culture do not exclude those of us who are members of LGBTQ+ communities, and in fact, research shows a disproportionate number of trans folks experience sexual assault, especially transgender people of color and transgender people who are also disabled.

It is humbling to be invited to be part of this very important work. There are about 30 of us total, working in small groups. In both of my groups, we’re approaching each chapter with a diversity and equity framework to train and educate folks who are on the ground to more broadly respond to people who are experiencing it.

It’s exciting to expand my networks beyond the academy with so much of what has shaped my own learning and priorities. It’s how theory connects to everyday life.