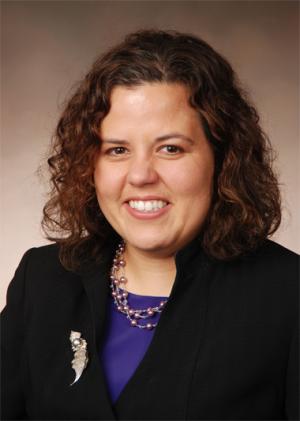 Several years ago, Michelle Barron, M.D., and a team of residents and interns were walking through the often-confusing halls of one of the medical buildings on the CU Anschutz Medical Campus. She had the lead, walking purposefully ahead, and opened a door for everyone to step inside – the janitor’s closet.

It is a funny story she likes to tell, reminding people that she has no sense of direction. She may not always know west from east without a clear view of the mountains, but she has a firm grip on how to get from point A to point B when it comes to the study of infectious diseases.

“Follow me and you never know where you’ll end up; you’ll go places where you never knew you would go before,” she jokes. In truth, as an associate professor in the Division of Infectious Diseases at the CU School of Medicine at the Anschutz Medical Campus, Barron’s research often deals with mysteries, and that’s part of the appeal of her job.

“It excites me. I will always have a job that is stimulating and completely different from day to day,” she says. Currently, she’s researching resistant organisms, hoping to figure out how to identify and combat them. “It’s interesting work with a lot of unknowns. You never know what to expect.”

1. How did you choose this career path (both medicine and academics)? 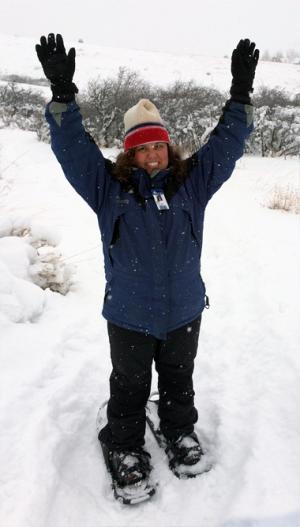 The study of infectious diseases is my calling. When I was in medical school, it was during the height of the AIDS epidemic; patients were dying from the disease and often from other infections. I had a lot of interaction with those types of patients and I kept thinking this is what I was going to do with my life: help figure out how to fix this, how to prevent people from getting these kinds of infections by fixing the immune system or something else. When you are young, you feel like you can do it all, but the determination has stuck and it still drives me today. That’s the approach I always take – we can figure this out, we can prevent this from happening. You can only do that type of investigation and research in an academic setting; you can’t ask these questions and try things out and design projects to try to determine the best methods or science or lab work in a non-academic clinical setting.

2. Much of your research focuses on preventing the spread of infections in hospitals. What has happened to help reduce institutional incidents of infection?

It starts with the patient, but it is so much more. We talk about infection prevention and our mantra is: “It’s everybody’s job.” That means it starts with the CEO of the hospital and continues throughout the institution, even with the people who don’t interact with patients. The role is the same: to ensure the environment that a person is living in while in the hospital is kept clean and disinfected appropriately, and that there are no venues for infections to be transported out of the room.

Many things we learned are not connected to the individual but are about the processes. For instance, insertion of a medical device is an area where using beautiful science makes a difference when it comes to preventing infections. If you standardize the processes, everybody is trained properly, and everyone uses a checklist – just like pilots do – it makes a huge difference in the infection rate.

When the processes were first standardized, there was pushback. Physicians like to think that we are independent thinkers who need freedom to figure out the best way to do things. But the truth is doctors have done that with mixed results. When you apply a scientific standard – after testing the process to find out what is best – and everyone follows the standard, it has profound results. Across the United States, infections have decreased because the science was done, the results published and regulatory bodies required use of the standard. Coming up with systematic processes instead of allowing the individual to decide has had a profound impact on the way we deliver health care.

3. Some of your recent research looks at the Ebola virus and how to be ready for new emerging infectious threats. One of the newest threats is the Zika virus. Can what you learned about Ebola be useful in combatting the Zika virus?

For many years, (the infectious disease community) has worried about the next coming plague. Will it be the H1N1 virus? Bird flu? Or something as exotic as Ebola? You have to think about any infectious disease on an individual level and on a global level. It’s one of the reasons I love my job because I get to interact on multiple levels when thinking about preparedness

It’s about planning, putting systems in place and getting people trained for whatever hits the door. We need to keep employees safe while allowing them the ability to take care of patients. Ebola brought that to the forefront. Every hospital has to have a disaster plan in place, but when dealing with infectious diseases, you also have to consider how to keep staff personnel safe while they are delivering effective care.

Zika illustrates once more that we live in a global world. You could be on a plane coming from Africa and stop in several cities in the United States, bringing with you a potentially infectious disease, and that could be spread to others in a short amount of time. In addition, Zika and the Chikungunya virus have this interesting phenomenon where mosquitos can be infected by a person. The medical term is autochthonous transmission. So you come back from Brazil after having a great time at Carnival and you are carrying the Zika virus. You return home to a place where mosquitoes that can carry the virus live. You’re in your garden and get bitten by a mosquito; now that local mosquito picks up the virus. Next, the mosquito flies into your neighbor’s yard and bites the neighbor, who gets the Zika virus. That begins the cycle that introduces the virus into a country that doesn’t have that virus.

Ebola and Zika are not new; we’re just more able to tell you what they are now than we were 20 years ago. Some of these viruses have been around for hundreds of years and are known and have been described. Then we have the SARS virus, which we think is new, but we’re not sure because it hasn’t been described before. A lot of these viruses are highly related to each other, sort of like first cousins. They undergo some sort of mutational event, and then they aren’t recognized as first cousins, but as a cousin twice removed or 10 times removed. From an evolutionary standpoint, most organisms predate man by millions of years so their very existence and their ability to survive depend on being able to adapt to new environments.

We thought Zika was new – something other than what it was – but after doing the science, we found out what it really was. With many infectious diseases, we have specimens from outbreaks 20 years ago or 100 years ago and we can test them to find connections.

4. How do “we” choose which diseases out there are ones to worry about or which ones we should try to combat?

We would love to figure that out and what is that magic thing we can do? There are some things that are very simple that can be done by everyone in a developed country. If you control the mosquito population, for instance, then you would eliminate Zika from affecting individuals. But in resource-limited settings, we don’t even have reliable water sources, let alone the ability to remove water sources or control mosquitos. Ebola, though more complex, follows the same principle. There was a lack of infrastructure to contain it or prevent it from moving beyond where it originated. So realistically, to prevent or control some of these diseases, you need global resources and a way to move across language and cultural barriers.

It’s also important to remind individuals that they have a role and a way of contributing to prevention and preparedness. For instance, one thing individuals can do is let their doctors know any information that might be important about where they were, who they were with and what they were doing.

5. What is the most important thing you learned from your years in medicine that you try to pass on to others?

I tell students, who often are young and impressionable, that what we do is an incredible privilege. We are involved in patients’ lives at the happiest points – the delivery of a baby, for instance – or at the worst periods of their lives. And you meet people that you would never encounter otherwise, much less in these extremes. It’s very fulfilling to be able to observe it and learn from it and gain insight into your own life and expectations. I personally feel you need to reflect on that periodically and figure out what you want to take with you.