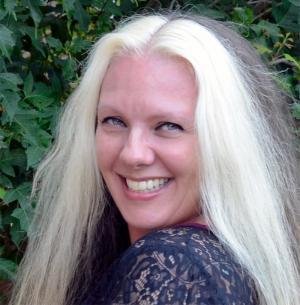 After graduating from Cal State Long Beach with a bachelor’s degree in film and electronic arts, Michaela Steen worked at a post-production company in Venice Beach as a client services supervisor.

“I was waiting for the next assistant editor spot to open up. And I waited. And waited. And waited. The film industry in Los Angeles is tough and, in retrospect, wasn’t a good fit for me,” she said. “Funny thing is, I originally wanted to study art history, but my parents weren’t ecstatic about the prospect of me pursuing a discipline that often ends up on the list of lowest-paid careers.”

But her passion for art and history, and the desire to pursue a graduate degree, led her to research the master’s program at UCCS.

“And the rest is history – literally. I ended up receiving my MA in history at UCCS. I wrote all three MA theses on art and, after graduating in 2010, began teaching art history in the Visual and Performing Arts Department (VAPA). As Morpheus said, ‘Fate, it seems, is not without a sense of irony.’” 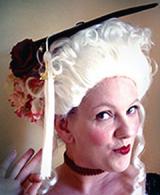 For her graduation from the UCCS history department, Steen dressed as a favorite historical figure. "I have always been fascinated with Marie Antoinette," she says.

Steen also is coordinator of the Visual Resource Center, which is housed in and supported by the Visual and Performing Arts Department. Students who are VAPA majors or enrolled in a VAPA course can access the center’s resources, which include camera, printers, a professional graphic arts scanner and computers. Steen said one of the coolest pieces of equipment the students can use is an Epson Stylus Pro 9900 printer. It can accommodate a minimum 44-inch sheet of paper and can hold a 100-foot-plus roll.

“Some of the images students produce on this large-format printer are absolutely stunning. Of course, the intimacy of a small print can be moving, as well.”

Steen also manages VAPA’s website; provides graphic design services for faculty, staff and the occasional student club event; and assists students with any other course-related needs. She was awarded the College of Letters, Arts and Sciences Outstanding Lecturer Award in 2014.

1. How did you choose this career path (arts, history, academia)?

I have been an artistically inclined human since I was old enough to mutilate Barbie Dolls to create “sculptures.” Pursuing a career that utilized these skills was inevitable, I guess. But truth be told, from the age of 5 until high school, my dream was to become an astronaut. I have a substantial obsession with outer space, futuristic technologies, sci-fi films and dystopian fiction, which has parlayed into classes that incorporate all of these elements.

I already love teaching. But when you get to teach classes that you’ve designed with your passion guiding the way, it is unbelievably rewarding. Right now I’m finishing up a cross-listed art history/film summer course titled “Robots, Androids and Transhumans in Contemporary Art and Culture.” We’ve had incredibly engaging and thought-provoking discussions. I look forward to teaching it again.

I’m fortunate to have had many professors, both as an undergraduate and graduate, who were inspiring and influenced my decision to become an educator. My time in the master’s program at UCCS was certainly a formative part of my career. But I think it’s also important to mention the inspiration I draw from my colleagues in VAPA and the Humanities Department. Collaborating and exchanging ideas with them has been invaluable.

2. You teach a variety of interesting courses, including “Fraud, Myths and Mysteries in Art History and Archaeology.”  What kind of myths and mysteries do you discuss in this class?

As an MA student, I was fascinated with the Western palatial civilizations and, in particular, the story of the Trojan War. When I started teaching, my specific area of specialization was the Bronze Age Aegean – though my interests spanned the Neolithic through the Hellenistic periods.

In “Frauds, Myths and Mysteries,” Dr. Karin Larkin and I analyze popular myths, controversies, hoaxes and unexplainable phenomenon in the past. While my research certainly influences what I cover – “impossible engineering” of Egypt’s pyramids, Schliemann’s discovery of “Priam’s Treasure,” and Plato’s Atlantis – we address a wide range of topics such as fantastical archaeology in popular culture, the myth of race, new ageism and the impact hoaxes have on public trust. We also examine sites and events that foster wild conspiracy theories such as Göbekli Tepe, the Nazca lines, Piltdown man, ancient aliens and the Moundbuilders.

I also teach two art history courses in VAPA: a lower-division course titled “Art and Ideas: Michelangelo to Basquiat” and an upper-division course titled “Contemporary Art.” Both are thematic, discussion-based courses that challenge the students’ preconceptions of art-making and meaning-making through close analyses of specific works. My background in history has definitely been an asset.

3. You also are teaching “The Transhuman Future” this fall. What is transhumanism and how does it relate to the arts?

Transhumanism is a movement towards elevating the human condition and extending life, improving upon our fragile and restrictive biology, and eventually transcending our organic human form altogether.

A Transhumanist Declaration was crafted in 1998 by a number of people, among them the Swedish philosopher Nick Bostrom. The declaration begins with an acknowledgement of technology’s potential benefits and detriments to humanity, followed by a call to arms for investments in research, changes in policy-making, and consideration of individual rights and values to reduce risks and abuses of such technologies. It kind of reminds me of the manifestoes of early 20th century art movements.

I’ll be teaching “The Transhuman Future” this fall with my colleague Dr. Joseph Kuzma. He hails from the Philosophy Department and will bring a complementary perspective. I approach the course through the lens of contemporary art and culture. The topics I will be covering include electronic companions and human relationships with these objects, robots who create art, the trope of the artificially created woman, biohacking and body enhancement, mind-uploading and technology-based memory enhancement, to name a few.

Students will be reading Philip K. Dick’s “Do Androids Dream of Electric Sheep?” and “2001: A Space Odyssey” in combination with a screening of the books’ respective films. There are a couple “Black Mirror” episodes that we’ll watch, as well as a collection of contemporary art that explores this merger of humanity with technology.

4. What outside activities or hobbies do you enjoy? 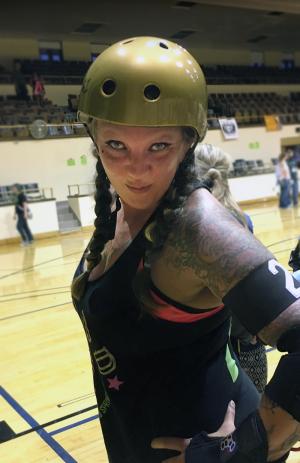 Steen shows her game face as a member of the Pikes Peak Derby Dames.

I play roller derby with the Pikes Peak Derby Dames, which consumes all of my free time and disposable income. I skate with women from a variety of different professions, and of all ages and body types. Derby is a very empowering sport. At the end of the bout, young girls come up with fire in their eyes and ask you to autograph their programs. I am looking at the future. These girls are strong and fierce and have found role models in these derby athletes.

Furthermore, roller derby is very community-minded. We practice and compete year-round in the Colorado Springs City Auditorium. We also work with nonprofits such as TESSA and St. Baldrick’s, as well as organize events that connect us with the community such as public park clean-ups. And I would be lying if I said playing a contact sport wasn’t an excellent stress reliever.

5. Do you have a favorite item or artifact that you keep in your office? If so, what is it and what is the story behind it?

I don’t like to play favorites, but I’d have to say my autographed photo of Richard Herd’s human skin mask being ripped off to reveal an alien lizard beneath is it. Herd played Commander John in the 1983 series “V,” and I have very fond childhood memories of that show. I went to Galaxy Fest at the Antlers Hotel in 2014 and he was signing autographs. There was no way I was missing that opportunity!

At home, I have a respectable collection of Greek reproductions from my visit in 2015. I have a Phaistos Disk from the Heraklion Archaeological Museum, a couple of gorgeous black and red-figure amphorae from shops in Athens, the marble head of a Cycladic figure from the cemetery at Phourni and a clay Linear A tablet excavated from Chania.