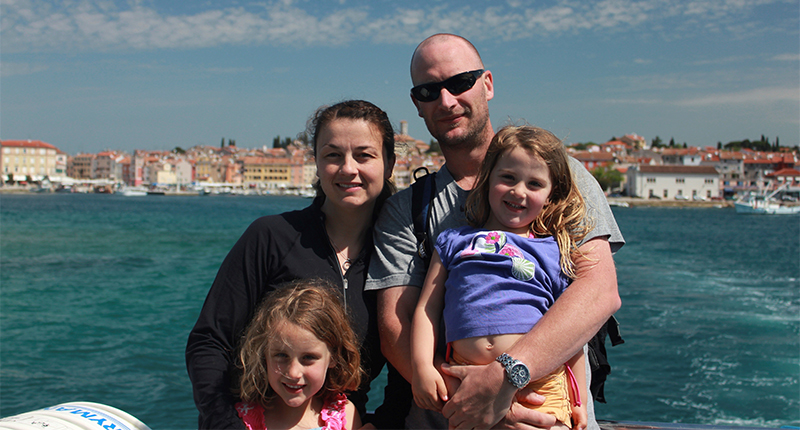 Meghan Lybecker with her family.

Ticks aren’t just pesky, they often carry disease. State and local health departments reported a record number of cases of illnesses spread by ticks in 2017, according to a recent report released by the Centers for Disease Control and Prevention (CDC). There  were 59,349 confirmed cases of tickborne diseases in 2017, up from 48,610 in 2016, according to the CDC; the true number of cases is likely higher because of underreporting.

Meghan Lybecker is hoping her research will affect those numbers. She’ll work with two University of Montana researchers, Dan Drecktrah and Scott Samuels, to study the bacterium that causes Lyme disease to improve prevention and treatment strategies.

Her team recently received a five-year, $866,800 grant from the National Institutes of Health to determine how Borrelia burgdorferi (the causative agent of Lyme disease) can regulate its genes so that it can live in disparate and changing environments.

Lybecker is an assistant professor in the University of Colorado Colorado Springs Biology Department. She grew up in the Pacific Northwest and after earning a Ph.D. at the University of Montana and finishing postdoc work in Vienna, she began looking for a job that would fuel her passions of biology and the outdoors. 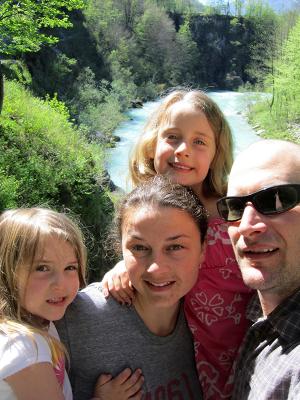 “Although I had never been to Colorado, it had mountains, hiking, outdoor activities and a good quality of life,” she said. “I also wanted the opportunity to do research as well as teach, and UCCS had the persona of being a teaching and researching university.”

Although she originally thought she would be an architect, she fell in love with science – particularly biology – while taking undergraduate required courses. Professors pushed her into pre-med, but after shadowing doctors, she realized the medical profession wasn’t the right fit for her. After helping a professor with research, she found the right path.

1. A research focus for you is understanding how organisms, and in particular, bacteria, sense and adapt to environmental pressures by regulating their gene expression. How do bacteria do this?

Lybecker with a group from her lab on their monthly "Science in the Mountains" hike.

Bacteria regulate gene expression quickly; it only takes seconds. Think of salmonella. It’s on a piece of chicken that you don’t cook well enough and then eat. It goes from living on the piece of chicken in the refrigerator, where it has to thrive in a cold environment, to the heat during cooking, to the acidity of your stomach, and then to the intestine. It has to regulate gene expression to deal with the different environments and it does it very, very quickly.

It senses where it is and turns on genes that it needs to survive in the environment and turns off genes that it doesn’t need. There are multiple mechanisms it uses to achieve this. We have an idea of how the sensing works, but we don’t have much knowledge about how it changes gene regulation and the molecular mechanisms behind that. This is the area where I work.

2. Why did you choose to study the bacterium that causes Lyme disease? What do you hope to find and how will this help the general public?

It started back when I began my Ph.D. at the University of Montana. I did different rotations in labs, trying to find a good fit. The bacterium that causes Lyme disease, Borrelia burgdorferi, is the bacterium that my mentor worked on. I chose that lab because they were working on molecular genetics, which is what I love and because Lyme disease is an infectious disease, and so it had a public health component to it. Borrelia burgdorferi is interesting in that it is different from a lot of other bacteria: It has a linear chromosome and up to 21 plasmids (small DNA molecules, which carry genetic information), which is really kind of unheard of.

It’s not an easy organism to work with. It’s not genetically tractable, and it has a long incubation time for growth, compared to Escherichia coli (E. coli), which doubles every 20 minutes. All of these things make it difficult to work with, but somehow, I keep coming back to it.

We obviously are at the very basic end of science with this work. If we can understand the molecular mechanism of how gene expression gets turned on or off in order for this bacterium to either survive in the tick or be transmitted to the human, we can inhibit the bacterium or come up with a treatment or a vaccine or something like that. The lack of basic knowledge doesn’t allow for us to do that yet, so we really have to figure out how gene regulation works and then we can take that next step.

3. Climate change, specifically a warming environment, has allowed many species/diseases to migrate northward and exist or thrive. Is this the case with Lyme disease? How does this affect your research?

There are certainly people who are working on how climate change affects the organisms associated with Lyme disease, and I believe climate change has contributed to disease migration. Lyme disease started in the Northeast – if you look at what the CDC has mapped – and look at cases reported. Through the years, the disease has certainly moved from the Northeast and is spreading. So I think climate change has played a role but also better reporting. There also is a new species of Borrelia that has been discovered that has Lyme-like symptoms, and that is located more in the upper Midwest, Borrelia mayonii. Borrelia miyamotoi, which was first found in Japanese ticks, also is found in North America, and is more like a Borrelia hermsii, which is a relapsing fever disease. As our technology gets better, we’ll find that there are more out there that are causing these tick-borne diseases than we know, especially as climate continues to change and those ticks start moving to more places where they can survive.

Primarily my work is centered around understanding RNA (a biomolecule with an essential role in gene expression) as a regulatory molecule and how it regulates gene expression. We spend a significant amount of time genetically manipulating the bacterium, for instance, by removing pieces of DNA that code for these regulatory RNAs.

A normal day in our lab consists of DNA manipulation, assaying gene expression and analyzing data. We generate mutant strains by deleting a piece of DNA that codes for a regulatory RNA. Next, we would determine if the loss of this RNA resulted in misregulation of a certain target gene. If the deletion of the RNA misregulates the gene expression, we will examine its role in the tick-mouse infectious cycle with our collaborators at the University of Montana. We would determine if the deletion of the regulatory RNA changed the bacterium’s ability to survive in a tick. Or, did it change whether that bacterium could transmit from a tick to a mouse? Could that mutant strain survive in a mouse, and if that was the case, could a tick be infected from feeding on that infected mouse?

If we knock out that regulatory RNA, does it change the pathogenesis of the bacterium? If it does, then we often move to a global approach where we would do RNA sequencing to discover all the genes that are misregulated, and then we would follow that gene or genes.

4. You did a fellowship in Vienna. Was there a specific reason why you went to Austria?

There was a program there called the Vienna International Postdoc Program. As a postdoctoral fellow, you had funding and a mentor research lab and a path for independence. There were great training opportunities that I don’t think you would get in a traditional postdoc program. They also have this amazing RNA biology/biochemistry community. It was a really great place to be for me in terms of the science that I was interested in, what I wanted to learn, and the ability to learn how to become an independent researcher in a safe environment. And I loved to travel and learn about other cultures, so I sought out an international postdoc. 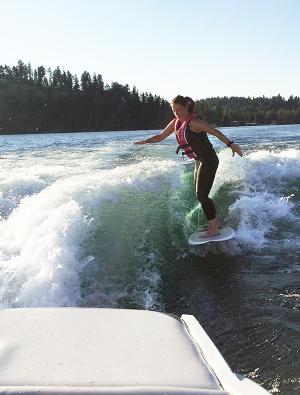 In Vienna, I worked on E. coli and learned all these great techniques and had excellent colleagues to exchange ideas with, and now I apply those to Borrelia. My lab is split in half. We do work on the Lyme disease agent, but we work in basic biology in E. coli. It’s much easier to work with E. coli because it is genetically tractable, grows quickly, and everything can be done a bit more quickly. I often try cutting-edge research in E. coli and if it works there, I move it to Borrelia.

5. How do you relax away from your lab?

I like to spend time outdoors hiking and trail running, and if I’m near water, I love wake surfing. And traveling. I love Austria because it was my home for four years, but we also spent a lot of time in Croatia and it is one of my favorite places to visit.