“Pin-Up Grrrls: Feminism, Sexuality, Popular Culture” and “Punkademics: The Basement Show in the Ivory Tower” may not sound like conventional book titles in the world of academia, but then Maria Elena Buszek isn’t a conventional academic. Those and other publications from the associate professor of art history at CU Denver amplify the punk rock attitude she brings to her teaching, research and other pursuits.

Buszek’s interest in art began in her youth, though she didn't grow up visiting art museums or galleries. Her dad was a record collector and musician. She spent a lot of time in record stores, too, eventually working in them. That led to work in radio, gaining experience that she drew upon when teaching and learning went remote at the start of the pandemic.

“It was like all my radio-station muscle memory came back to me, albeit in a ‘show’ where I was doing the equivalent of running the decks, the board, the phones and the mic all by myself nonstop,” she said. “As a result, I felt surprisingly well-prepared for what was essentially ‘live broadcasting’ each of my classes for a year and a half.”

After returning to in-person classes, Buszek found that students wanted to retain some aspects of remote teaching, including the posting of recordings of each class.

“I found ways to incorporate these pandemic strategies into my ‘old’ in-person curricula,” Buszek said. “The recordings were hard, since I had to find out a way to record the students now that we weren’t all onscreen and mic’ed-up together. In true punk-rock, DIY spirit, I wound up just buying a cheap double-mic setup that connects to a USB on my laptop – so, I still get to play Phil Donahue, but by running around the class and sticking a mic in their faces.”

Earlier this year, Buszek was named to the newest class of President’s Teaching Scholars at CU.

“‘An honor’ doesn't even begin to capture the feeling of being inducted into this community of distinguished educators from around the entire CU system,” Buszek said. “I’m not sure folks realize this about the President’s Teaching Scholar Program, but it’s not an award, per se. It’s really a community and laboratory where faculty share strategies for, and collaborate on, improving student success in CU’s classrooms.

“I was only inducted this year – proudly, as the first-ever art historian, as well as the first member of the College of Arts and Media faculty. But in the few meetings and retreats I’ve attended, I have already learned so much about ways to rethink and renew my teaching practice. Joining this fellowship has opened up a whole new network of colleagues dedicated to better serving their students, and with truly inspirational passion, optimism and energy.” 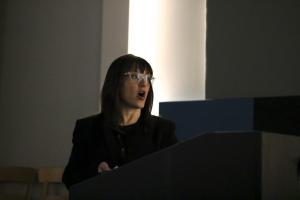 1. One of your recent book projects was co-editing an anthology of new writing, “A Companion to Feminist Art,” which sounds like a potentially overwhelming subject. What was your approach and how did you go about your work?

It was indeed overwhelming! Especially since the book required commissioning all-new writing on the subject. Ultimately, it was a lot like curating an exhibition: You have a wish list of subjects you want to include, and a corresponding list of folks who write or make work about those subjects, and then you start reaching out to ask if they are available to contribute, and hope for the best.

Sometimes, you get your wish, but more often than not, some folks you want to include are working on something else, which is really exciting, and something you haven’t thought about, so you just let them roll with that. Other times, a subject is so important you just don’t want to let it go, so you have to get more creative about who might be interested in writing about it, and ideally that, too, winds up being wonderful and surprising, and better than what you might have come up with yourself. (In fact, some of my favorite chapters were the biggest surprises, either because an author or artist tweaked a theme, or an author had a surprising take on one of ours.)

But it’s a huge task: My co-editor Hilary Robinson and I thought it would take three years, and it took six. But we’re so proud of the book, and the way our having to be so flexible about how it came together meant it became a more authentic snapshot of our current moment in feminist art history.

2. You recently received a grant for your current book project, “Art of Noise: Feminist Art and Popular Music Since 1977.” How is that process going, and what are you discovering about the topic?

This poor book’s been sitting on the backburner the whole time that the “Companion to Feminist Art” was taking twice as long as I’d anticipated! It’s slow-going, but so much fun. I write mostly about living artists, which means that a lot of my research consists of finding and interviewing players from these art and music scenes to help me flesh out the ways that visual art, performance and music have been intersecting in the work of feminist artists since the ’70s. But I have to cross-check everyone’s memories, stories and competing perspectives against the physical record, so I am simultaneously digging around archives and looking at the publications, documents and recordings from these eras, which sometimes yield really wonderful discoveries.

For example, I’ve been writing about and talking to the experimental film director Lizzie Borden, who recently started screening her 1976 quasi-documentary film “Regrouping,” about a feminist group she was part of; she had shelved it for 40 years because several of the subjects protested the final product when it debuted. At some point after these screenings were announced, I realized, “Holy cats! Back in 2018, I found a copy of the actual mimeographed, signed broadsheet those women passed out at its first screening!” – in the archives of the late New York art critic Edit DeAk – and I have a chance to finally put these long-separated things together.

I also came across a contact sheet of photographs of the band UT and pieced together that the now-legendary photographer Cindy Sherman took them when they were all just struggling artists in New York in their early 20s. The Terra Foundation Research Travel Grant that I received will allow me to see whether there are any similar gems that help me connect more dots about these kinds of feminist networks across the art and music worlds, and across national boundaries, based on new evidence I hope to ferret out in archives in Manchester, Liverpool and London.

3. What is your approach to mentoring students who are interested in research?

Throwing them in the deep end! I’m joking ... but, not really.

I’ve been lucky to have had some fantastic research assistants through the CU Denver EUReCA! Fellowship. They were already fairly steeped in basic scholarly research practices from our Art History classes, but I’m Gen X, and so probably the last generation to actually deal with card catalogs, microfilm machines – the old, physical media of traditional research – which I think is important for them to maneuver.

While digitization and the internet have made accessing scholarship as well as archives much easier, because I am dealing in this book project with a lot of primary and vernacular sources, this stuff just isn't available on Google, or even scholarly databases. So they had to just sit down and scour through full runs of journals, or locate minutiae published in Creem magazine or one-off fanzines, or find names of oft-forgotten writers, artists and musicians for me to try to hunt down and interview.

I feel like this not only gave them an opportunity to learn some old-fashioned research skills, but also how frequently boring “the hunt” is. And, if they can still be excited about research after a summer of poring over vintage issues of Trouser Press or Artforum – where you’re going to find maybe a single article or advertisement that has anything to do with our subject in a whole year of publications – then maybe research is your bag. If not ... well, this is the unglamorous work you don’t see when you open one of your professor’s books.

4. What draws you to be a curator of art exhibitions? Do those projects ever dovetail with your teaching and research?

When I first went into art history, I thought I wanted to be a curator! My earliest jobs were all in galleries and museums, and I honestly only started teaching because I was putting myself through college and just needed to take whatever job I could get in my field! But, like a lot of educators, when I first started teaching, I quickly discovered it was way more than just a paycheck: I absolutely loved the engagement, the energy and how much I learned by teaching. And I was good at it!

But, in some ways, as much as my research is about nontraditional subjects in cultural history, I am in other ways an old-fashioned art historian, in that I love working with objects. So whenever I’ve been offered the chance, I am delighted to curate exhibitions: I’m actually at work on one right now, collaborating with the painter Helen Beard and the emerging art historian Alayo Akinkugbe on a show that will debut at this year’s Frieze London art fair. 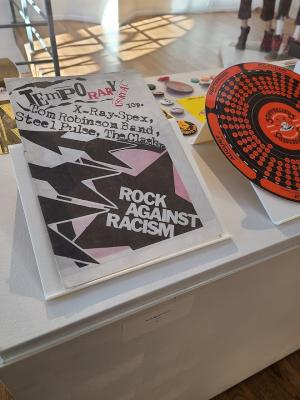 Work from the Emmanuel Gallery's Too Fast To Live, Too Young to Die: Punk Graphic Design.

These practices have indeed dovetailed: most recently in the Emmanuel Gallery exhibitions Too Fast to Live, Too Young To Die and Reversing Into the Future, which were organized around the amazing archive of punk and post-punk design work of New York City-based collector Andrew Krivine. I got to know Andrew and his collection while working on “Art of Noise” and he’d offered my students the chance to “virtually curate” an exhibition of his recently digitized archive, which the Emmanuel’s director Jeff Lambson was thrilled to create an assignment around for his Museum Studies class – online in the spring of 2021 because of the pandemic. Once it was determined that CU Denver would be back in-person in the fall of 2021, Andrew basically said, “Let’s just pull their ‘virtual’ show together in real life for the Emmanuel!” So Jeff and I naturally jumped at the chance to bring our students’ vision to campus.

5. Let’s shift from vision to sound: You have made Spotify playlists that serve as supplemental soundtracks for art exhibits and courses. If you were to put together a playlist reflective of your time so far at CU Denver, what might we hear?

Wow, it would probably have to be a greatest hits supercut of all my classes’ playlists, from Hildegard von Bingen to Haruomi Hosono to Big Freedia!

And, as my students know, you can't just ask me to think about a playlist without me actually putting one together...