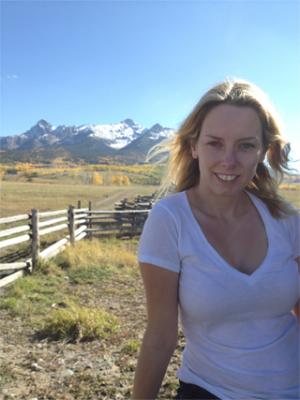 Growing up in London, Maria Caffrey spent many vacations at the seaside and selected oceanography as a college major, with a minor in geography. As an undergrad at Plymouth University, she later switched her major to geography. Just as she was considering spending a year in Colorado as an exchange student, her advisor talked her into thinking about paleoclimatology, or the study of changes in climate over the entire history of Earth.

“Neil Roberts had just written a very important and popular book, ‘The Holocene: An Environmental History,’ and we talked about what kinds of projects I could do as part of my honors dissertation,” said Caffrey, now a research associate at the University of Colorado Boulder.

She spent her exchange year at the University of Denver then completed an undergraduate thesis that focused on pollen evidence of climate change on the Colorado plateau.

“I pulled the pollen out of sediment cores taken from lakes on the Grand Mesa to see how vegetation changed over the past 20,000 years,” Caffrey said.

After her year at DU, she decided that she liked the state so much, she returned to DU, where she earned her master’s degree. At the same time, she spent time working for the National Park Service in Lakewood.

Caffrey has researched climate change in places as far away as Guatemala and as close as Rocky Mountain National Park. Since 2013, her research has focused on climate change at 118 coastal National Parks, looking at impacts of seal level and storm surge.

1. Your research focuses on past and future climate change. Tell me about how someone in the middle investigates each.

Strategies really do differ. Whenever we write a research proposal or draft our findings into a research paper, it seems that paleo people throw in a line that says the findings will be useful for people doing research on future climates, but they never expand on that. What I wanted to do was see if my results were going to be significant to anyone doing future climate research, so I decided to get into the future side of things as well as looking at the past to make sure that the past information really is informing the future.

I feel the past and future are kind of exclusive from one another. People doing the future research really should understand what happened in the past because it might inform them in ways they would not expect. The University of Denver, where I got my master’s degree, has a heavy focus on GIS (geographic information system, which captures, stores, analyzes and manages spatial or geographical data). Even though it wasn’t something I was interested in, I had to learn it. So I’m proficient at GIS. I can use GIS and use my paleoenvironmental research to inform me about what could be happening in the future.

I don’t know too many people who are trying to straddle the future and the past in their research arena, but I think that it is something that is really important. I’m tired of these throwaway lines in paleo papers that say it will be helpful to future research: You don’t know until you’ve tried it how it is going to be important for future climate projections.

Working with the government also has been important. I get to see how they take our findings and how they interpret them. People sometimes assume that you can send a layperson a research paper and they’ll read it and understand it and make the appropriate changes or adjustments, but I think that’s not always the case. Sometimes you have to be a little more explicit in your recommendations and spell it out a little bit more than you would in a normal scientific paper.

2. How did your research begin to focus on coastal parks, especially since you are in the middle of the country?

I started off as an oceanography major and have always been interested in the coastal environment. It’s so dynamic and really interesting to me. Even thought it might seem strange that I’m in the center of the country, it makes sense from a National Park Service perspective because the coastal coordinator is here in Lakewood. We work closely together to talk about issues that the NPS is dealing with and the areas where I’m interested in doing research. I wish there was more travel involved – I’ve visited about a quarter of the parks I’m looking at — but right now my research is focused on crunching numbers.

3. How can we protect coastal resources and how do the strategies for each of these places differ?

There is not a prescriptive, one-size-fits-all kind of approach to protecting the resources. The perfect example would be a place like Alaska, where there’s something called isostatic rebound where the land level is rising at a very rapid rate. It’s rising because during the last ice age, there used to be large amounts of ice piled onto the continent. As the ice has melted, that weight has been lifted off the land and so the land is still rebounding from that weight. Even as sea levels increase, the land level is rapidly increasing relative to the sea level. The sea level actually is decreasing around southeastern Alaska in areas like Sitka. So if you try the prescriptive approach, say, plan for 1 meter of sea level rise, you would be in trouble in places like Alaska where they are actually going to see a relative decrease in sea level.

My paleoresearch has been really informative on this whole adaptation strategy. To be a paleoenvironmental researcher, you have to take into account a multitude of different factors. You can’t just look at the simple physical sea level rise component, you have to take into account things like what will change in terms of vegetation and salinity and how is that going to affect  what’s going on around that coastal zone. For my Ph.D. research, I looked at a lake – Laguna Saladilla in the Dominican Republic – that changed from saline to fresh over the past 8,000 years. Part of the change was result of the land level moving and part of the change was the sea level. But it was also about the vegetation that was growing and blocked the way for sea water to make its way to the lake. There are so many different factors that you have to think holistically about it; you’ve got to be inclusive of all these different factors. Every site is going to have unique opportunities and a unique challenge.

One of the NPS projects I was asked to advise on was in the aftermath of Hurricane Sandy. The discussion was about how high they should plan for storm surges as part of their adaption strategy for the area. It’s difficult to give precise sea level and storm surge numbers because you don’t necessarily know what CO2 emissions will be. We had to give them various scenarios that they could work with, which can be frustrating if you’re an engineer or manager tasked with deciding which scenario would be most appropriate to plan for.

The research is really about a multitude of different things and that’s one of the things I love about doing what I do.

4. During your research, have you discovered anything that has surprised you? Is there an aspect of the work you enjoy most?

Here’s the thing that doesn’t come up in my future climate research … I am a huge pollen geek. I love processing it and counting it; I’m really a palynologist at heart. It was something I was really resistant to learning about when I first got into this research and now I just find it so much fun and immensely relaxing. I know a lot of grad students who would think I’m nuts, enjoying spending hours and hours in the lab, but I can really go to town on the pollen. Maybe I’m saying that because I’m finishing up the final article from my Ph.D. dissertation, which focuses on Laguna Saladilla in the Dominican Republic where I examined changes in pollen, microscopic charcoal, diatoms and geochemistry.

5. Do you have a favorite item or artifact that you keep in your office?

My most precious possession is a book published in the 1950s, “The Textbook of Pollen Analysis” by Knut Faegri and Johannes Iversen. I’m really pleased with the book because it is a first edition and these guys are kind of the fathers of modern palynology. I love to look through that book, which outlines all the basic procedures and why we do them. It also has some parts that are totally wrong by OSHA standards today. For instance, it says things like, and I’m paraphrasing, “We would recommend that you wear gloves when handling hydrofluoric acid, although personally we don’t, we just wash our hands a lot.” Really funny things like that. Hydrofluoric acid is a serious substance, and it can kill a person if it isn’t handled properly. So I love looking through the book, seeing how crazy some of these people were back then. They were hardcore palynologists. It was all about the pollen and not thinking about the safety part. Of course there are new editions out now, and they’ve taken out some of the dangerous passages. Personally, I take lab safety very seriously, but I really do respect that passion they had for their work. It’s a level of obsession that I can identify with.