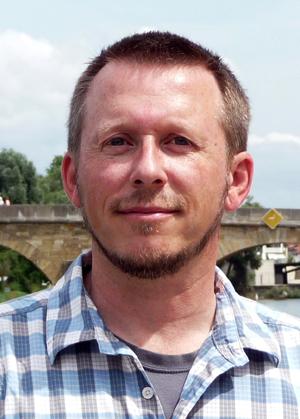 Downtown is the one place in a community with the highest concentration of uses and where the community’s most important institutions and businesses are clustered, says Ken Schroeppel, an instructor of planning and design and the director of professional engagement in the Master of Urban and Regional Planning (MURP) program at CU Denver. Cities and downtowns always have fascinated him, even as a young child.But it wasn’t until after he bought his first home and became involved with his neighborhood association that he decided to turn urban planning into a career. He earned his MURP degree from CU Denver and worked as a planning consultant and project manager, specializing in redevelopment and urban renewal planning, community planning, and military base planning.A few years after graduating from CU Denver, he taught a course in the MURP program as a lecturer, and in 2012, joined the planning faculty at the university on a full-time basis.

“I love being able to share my professional planning experience with students and to give back to the program that enabled me to have a career in urban planning,” he says. “My passion is to help communities thrive and, specifically, to work with my fellow citizens to make Denver the best city it can be for everyone.”

During free time, you might finding him posting to his blogs, DenverInfill and DenverUrbanism (visit http://denverinfill.com/blog/ and http://denverurbanism.com/), giving presentations about Denver’s growth and development to civic and business groups, serving on planning and community boards,  and leading public walking tours that highlight the complex issues relating to city-building and Denver’s rich urban legacy. He also enjoys exploring many of the great cities across the United States and around the world, which he says is critical to being a better urban planner and educator. This summer he’ll explore Krakow, Prague and Budapest.

1. What makes a city great and what do you consider to be some of Denver’s high points and low points?

There are thousands of great cities and towns in the world and the one thing they all have in common is that they were designed for pedestrians. Since the dawn of civilization, we built cities to be easily walkable because walking was the primary means of transportation for everyone. This naturally resulted in cities having dense, mixed-use development patterns because, since most people had to walk everywhere, it only made sense to put housing and shops and schools and all of life’s needs as close together as possible. It was only in the post-World War II era that we started building cities in a radically different way. We built low-density, sprawling communities with segregated land uses that required people to drive automobiles to get everywhere. That resulted in all sorts of significant negative consequences, so re-orienting our communities to be great walkable places is a major focus of urban planning today.Denver is a great city, specifically because we have a solid urban core that was built during the walkable-cities era and a dedicated citizenry who cares deeply and has invested heavily in keeping that urban core strong and vibrant. But like most other cities in the U.S., we lost our way after World War II and built sprawling automobile-dependent neighborhoods as well. Our challenge as a city is to transform more of Denver into great walking, biking and transit-friendly areas while recognizing the fact that a lot of people still need or want to get around by automobile. Denver is booming right now and a lot of the growth is caused by people seeking denser, walkable, mixed-use neighborhoods.

2. This weekend, people will have an opportunity to get an enhanced view of some of Denver’s classic buildings through the 11th annual Doors Open Denver event. What is your role in this event?

I’m on the board of directors of the Denver Architectural Foundation. As an organization, our mission is to encourage people to explore their city, experience the importance of planning and design, and to envision a great future for Denver. Our premier public event each year is Doors Open Denver. I’m on the DOD planning committee and the walking tours that I’ve led in the weeks before DOD weekend help raise money for DOD and get people excited for DOD and Denver’s rich architectural and planning heritage. This weekend, during DOD, there are dozens of interesting buildings — both old and new — that will be featured. Many are open sites available for people to explore on their own for free, while others that include a guided tour will require a ticket which can be purchased online in advance. Many of the featured buildings are those which the public generally doesn’t have much access to, so it’s a great way for people to see the interiors of many of Denver’s cool buildings. Every building has its own story to tell.

3. What aspect of urbanism are you currently researching and what do you hope to achieve with your findings?

One of the aspects of urbanism that I’m most interested in is the way in which the urban form of cities changes over time and the environmental, economic and cultural forces that cause those changes to occur. As a field of study, it’s called “urban morphology.” My particular focus is researching the urban morphology of downtown Denver. By using historic photographs, maps, and other resources, we can document how downtown has physically changed from original settlement to today. That knowledge informs future planning efforts in the downtown area and illuminates the fascinating legacy of downtown’s urban fabric. I intend to eventually share my research with the public in some manner as a community resource.

4. Why did you start the blogs DenverInfill and DenverUrbanism and who are your readers?

I created DenverInfill and DenverUrbanism for several reasons. DenverInfill came first (2004) and was designed to give me and anyone else who was interested a way of keeping track of the numerous infill developments being built in the downtown Denver area. I also wanted to spotlight Denver’s growth and revitalization to the world and promote it as a great place for investment, as evidenced by all of the infill development that was occurring. Finally, I thought it would be cool to learn how to build a website and to get involved in blogging. The whole thing started off, and remains today, as a personal hobby. In 2010, I launched DenverUrbanism as a companion blog to DenverInfill, where we talk about other aspects of urbanism such as transit, walking/biking infrastructure, public spaces, etc. While it was never my intention, my blogs have grown to become quite popular, not just with planning and design professionals, but really with the general public, as people in Denver are interested in and excited about the remarkable way in which Denver is growing and transforming into a phenomenal city. I’m particularly proud of winning (for DenverInfill) a Downtown Denver Award from the Downtown Denver Partnership. Those are often awarded to big worthy projects, programs or events to which a lot of people contributed, so I’m honored that they also value how one person’s passion and dedication expressed through a hobby can make a significant contribution to the success of downtown Denver.

5. From a personal perspective, some of Denver’s recent building projects are lacking in architectural interest when compared to those that were built in previous years. Are there restrictions on the types of edifices that can be constructed in the city?

The issue of quality architectural design in the new buildings going up in Denver is a topic of much public debate, which is overall a good thing. Generally, I think there’s too much focus on what a building looks like, and less understanding of the building’s urban form — its mass, scale and relationship to the street. I believe the new Denver zoning code, which is form- and context-based, is doing a fairly good job of producing the building forms we want to see. I think what people object to in some of the new buildings in Denver are the façade design attributes: things such as color, materials, patterns and articulation. These are more subjective and open to interpretation about what looks good and what doesn’t. While I definitely expect that every developer and their architect aspire to design an attractive building of high-quality materials, I also know that the vast majority of buildings in a city are (and should be) “background buildings” that constitute the bulk of the city’s urban form and otherwise don’t call too much attention to themselves. Therefore, as long as a building is well-proportioned and built with quality materials, has an appropriate form for its location and role in a growing city, and has ground-floor uses or design features that engage the pedestrian, then I don’t worry too much if the building looks “boring” or not. I’ll take a boring-looking building over a surface parking lot every time. A surface parking lot is a soul-sucking black hole in the urban fabric of the city. A boring building is still an economically productive, human-activated and form-giving component to the city.