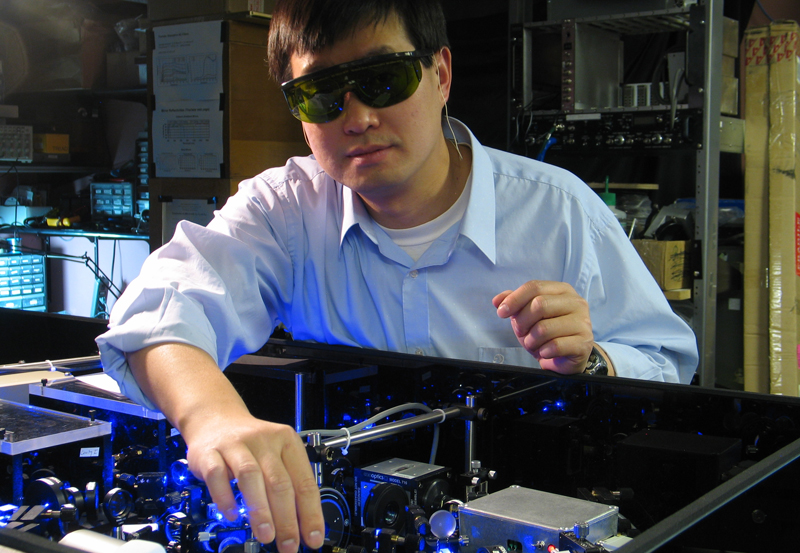 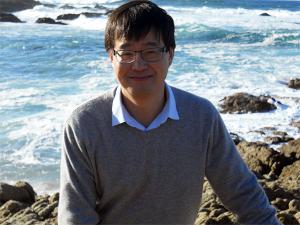 A high school competition intensified Jun Ye’s interest in physics, and he pursued studies in the field at Jiao Tong University in Shanghai, the same city where he grew up. After graduation, he came to the United States for graduate studies at the University of New Mexico and to earn his Ph.D. at the University of Colorado Boulder.

Ye’s doctoral thesis adviser, JILA Fellow John Hall (a 2005 Nobel Laureate), taught Ye that “with our own hands, we can make anything happen in the laboratory and do it better than our predecessors. The beautiful textbook teachings of physics can be translated into reality by our own doing.”

Ye felt empowered by the message and after time spent in Hall’s spectroscopy lab at JILA, Ye said he became obsessed with atomic, molecular and optical (AMO) physics. After receiving his Ph.D. in 1997, Ye went to Caltech and worked as a postdoc fellow. In 1999, he was offered a faculty position at CU. “I did so without any hesitation, knowing what a wonderful place JILA was to pursue AMO science.”

Ye is a Fellow at the National Institute of Standards and Technology (NIST) and a Fellow of JILA and a professor adjoint, JILA and the Department of Physics.

Ye and his group explore the frontier of light-matter interactions and precision measurement, ultracold matter and optical frequency metrology. The group worked for more than a decade on – and is best known for – developing the world’s best optical atomic clock, whose accuracy and stability doesn’t vary from “perfect time by more than one second in 15 billion years – more than the age of the universe.”

Ye has won numerous research awards as well as the Presidential Rank Award (Distinguished Executive) in 2015, which is given to only 1 percent of senior federal employees across the nation.

He also is a guest professor at Jiao Tong University, his alma mater, and East China Normal University, also in Shanghai. And while he likes the big-city atmosphere there, he loves Boulder, where he can devote his attention to scientific research during the week and spend leisure time “exploring nature and the magnificent mountains around us.”

1. Some of your research includes ultracold strontium and precision measurement. Strontium once was used in television faceplates to block X-ray emissions, so what about this metal makes it special or workable for your research?

Strontium (Sr) has a number of interesting physical properties that make it attractive for building an atomic clock. Sr has two valence electrons (hence it's listed in the second column of the periodic table). Two valence electrons can spin either antiparallel or parallel, but usually they don't like to change between these two configurations. It takes some higher order effects to allow the configuration to change. As a result, we can find an excited electronic state that is metastable, or in other words, has a really long life. This excited electronic state is connected to the ground state by an energy difference that corresponds to a visible photon. We can use this optical frequency transition between these two electronic states to build an (optical) atomic clock, which features a very narrow transition linewidth thanks to the long lifetime of both the excited and ground states. The narrower the transition linewidth, the easier it is for us to nail down the transition center frequency, which serves as the clock signal.

It turns out that Sr atoms are easily cooled and trapped by laser fields. For our high-resolution spectroscopy, we need these atoms to be stationary in front of us (as observers) for as long as possible. Any uncontrolled atomic motion can introduce error to our measurements. We laser cool these atoms down to 1 billionth of the room temperature and hold them in traps made out of focused laser beams.

2. How do you measure the optical clock’s precision? What are some of the applied uses for this atomic clock or how could it be used in the future?

In essence, we use the very precise energy difference between two electronic orbitals in the Sr atom to be our frequency standard, which serves as a clock. The two electronic orbitals correspond to the ground state and the metastable excited state of the Sr atom, which is connected by an optical frequency. We use a very stable laser to probe this atomic transition between the two states. When the laser frequency actually gets close to the resonance of this atomic transition, we can measure the relative population between the two atomic states to tell us how far the laser frequency is with respect to the atomic center frequency.

In order to measure the precision of a clock, we need to compare it to a better clock to find out any remaining errors. When the clock is considered the most precise, we build two similar types of clocks for comparison. In 2012, our lab built two Sr optical atomic clocks and started comparing their frequencies to see how stable the comparison was over time and also to check whether external perturbations to one of these two clocks would result in a measurable difference in the comparison results. We did this comparison from 2012 to 2015 to evaluate many of the systematic effects that could influence our clocks, and we have found ways to mitigate such effects down to the level of 2 parts in 10 to the 18th power.

These clocks help us push the measurement science to the absolute frontier. In return, we can use them to test fundamental laws of nature. Clocks are connected to gravity, as Einstein's general relativity tells us, and therefore they are natural candidates to test the general relativity, but also to search for physics that is yet unknown to us. We have been using clocks to investigate many-body quantum physics where the measurement precision is key for us to discover hidden correlations and symmetry. In the future, we can use clocks to detect gravitational waves and help search for dark matter. I also want to emphasize that advancing the frontiers of fundamental physics often brings unexpected technological innovations. The frequency comb is one such example.

3. What other research are you working on?

Besides working on Sr for both frequency metrology (clocks) and quantum physics, we also are using frequency combs to investigate how molecules interact with each other. In fact, we have a very strong research program on cold molecules – molecules that are brought to very low temperatures to gain fundamental insights into molecular structure, dynamics and interactions. One long-standing research project of mine has been a collaboration with professor Deborah Jin. Together we created the first quantum gas made of molecules, and used them to study quantum chemistry near the temperature of absolute zero. We are using them to study many-body quantum physics. The untimely death of Debbie has left a tremendous void and is very painful to all of us, but her legacy will live on, with one example being the ultracold molecule project that is advancing at a good pace, thanks to excellent students and postdocs.

4. What would you consider your favorite achievement(s) while you’ve been at the university/JILA and what is a goal you hope to reach in the near future?

I think one of the greatest achievements has to be the joint work with my students and postdocs. Many of them have moved on to their independent and successful scientific careers and I am immensely proud of them. I think our Sr clock/quantum physics, cold molecules and frequency combs are all great achievements since I’ve been at CU/JILA. I am very motivated in pushing our research capabilities to the next level where new scientific discoveries become possible. There are many unknowns in the universe, and the continued development of modern physical science remains very exciting.

5. Has there been anything in your work/research that totally surprised you or that came to an unexpected outcome?

One big surprise is the role that atomic interactions played in our Sr clock. We used Fermionic atoms, which are known to avoid each other, so we were hoping their interaction effects would be negligible and not cause any uncertainty to the determination of the atomic transition frequency. That turned out to be wrong. We had to come to a thorough understanding of these interaction effects to account for their systematic influence on our clock frequency. And once we went down this road, it became a very fruitful research direction. We are discovering how atoms become correlated with each other due to their interactions in the quantum regime. The pursuit of the next level of measurement precision and the exploration of quantum physics in a many-atom setting have merged into one common research theme. This is a very nice surprise and outcome.