During his senior year at the University of Colorado Boulder, Jerry Phillips took a course in biochemistry and was so fascinated by the topic, he knew it was the career field for him. He continued his studies at Colorado State University, where he earned his Ph.D., then went on to become a postdoctoral fellow of the American Cancer Society at the McArdle Cancer Research Laboratory at the University of Wisconsin. He became “even more interested in trying to research the biochemical underpinnings of disease.”

“Everything has a biochemical basis and if you are going to understand disease and how to appropriately treat disease, you need to understand living systems,” Phillips said. “Early cancer treatments, for instance, involved poisons, which of course killed a lot of other cells, too. Our teachers, and those of us learning, knew that if we understood living systems better, we could design drugs specifically targeted for cancer cells with minimal effects on normal cells. That’s what got me excited.”

Phillips spent years researching cancer and developing drugs to combat the disease, as well as teaching.

Now he’s serving the students at the University of Colorado Colorado Springs, imparting his knowledge about biochemistry – and life – as a professor and as the director of the Excel Science Center, which provides free tutoring to those who need it. Phillips has been at UCCS since 2006.

Between his postdoc position and his work at UCCS, he worked at the University of Texas Health Science Center’s oncology division, and also was the senior scientist and director of the Phase I Drug Development Laboratory at the Cancer Therapy and Research Center. After moving to California, he was a research scientist at the Pettis Memorial VA Hospital in Loma Linda and research professor of pharmacology at the Loma Linda School of Medicine.

He has published more than 60 papers, including one on research that looked at cell phones and the changes electromagnetic fields had on humans.

1. What is the mission of the Excel Science Center?

We have five Excel Centers: one each for math, writing, communications, languages and social sciences and, then, the science center. We all work collaboratively and provide academic support for students.

What I have tried to do over the years is to change some of the focus of the center. We still provide academic support, including the best tutoring services these students can find. But UCCS is primarily a commuter school. It always has bothered me that those students who commute often don’t feel themselves to be an integral part of the university community. They drive, they park, they go to class, they leave. But they don’t really participate in activities. A lot of these students don’t do well because they don’t feel part of the university community, and so what I’ve tried to do is provide a space where students feel comfortable and welcome. Students are able to come to the center and get a cup of free coffee, sit, look out the window, meet friends or study. We have space for 120 students and 38 computer stations where they can surf, shop or check out headsets and listen to music. If they need help, all the students have to do is raise their hands and they’ve got a tutor there to provide assistance.

The tutoring is free and unlimited. If students need a lot of help, they’ll get a lot of help as long as they meet their responsibilities for a tutoring session. I have a staff of students – a mix of graduates and undergrads – that generally numbers 25. In the past couple of years, because of changes in the maximum number of hours that student employees can work because of the Affordable Care Act and Internal Revenue Service requirements, it’s become necessary to look at other means of acquiring staff. I have a number of staff members who graduate and then have a gap year as they apply to a graduate program. I can hire them as nine-month temps and they have been a wonderful addition to staff by providing stability and a lot of help to students.

2. As director of the center, how do you personally make an impact on students?

What I try to do with students is give them a chance to talk about what they want to do so that we can carry on a good conversation. I can try to adjust the path they think they are on and ensure they are moving in the right direction. Often students don’t have a clue about what is required for certain careers – what courses they need to take or what they need to do to prepare for making application or what constitutes a good letter of recommendation or how to prepare for entrance exams to post-graduate programs.

3. Before coming to UCCS, much of your work focused on cancer research, including research on cell phones. How did that research come about?

I ended up in San Antonio at the university and then at the medical school there doing the work I had previously been doing: studying metals as anti-cancer drugs, designing those drugs and looking at some other molecular mechanisms of cancer development. A friend of mine at the med school got some money to look into the biological effects of electric and magnetic fields. This is associated with something known as the New York Power Lines Project. This fellow didn’t have a clue how to run certain assays, so I told him I would help. We were doing work with cancer stem cells in our laboratory, and I said, “Let’s take some of these cancer stem cells and expose them to your electric and magnetic fields.” The results blew me away. We got data to indicate tremendous changes in the properties of these cells. What is fascinating is that these electric and magnetic fields are so unlike chemicals. You can see chemicals, you can touch them, you can taste them, you can weigh them out. But with electric and magnetic fields, you can’t see anything, you can’t feel anything, you can’t touch anything. It takes specialized equipment to measure these physical agents that have tremendous biological effects.

That got me hooked. When we moved from San Antonio to California to the VA hospital, we got involved in researching biological effects of the radiation associated with cell telephones.  We got some really, really nice data from that research.

But I got dragged into the politics of a highly contentious area and I learned a lot about people and their motivations and how difficult it is to try to defend good science in certain forms to a core group, for instance, at regulatory sessions in front of regulatory bodies or in front of legislatures. Those are not places where you should try to defend science yet it is science that needs to drive certain policies.

Our studies have held up and will continue to do so and there is more data to come out of this study. I know that some of the data that has yet to come out will also support the work we did some 20 years ago.

Research is still being done on the subject, but not in our country because there is no money to do the research. When we were doing the research, we had a lot of money – millions of dollars from Motorola and the federal government – to look at electric and magnetic fields associated with household current. But all of that money dried up in the late ’90s and has never reappeared in this country. Research is being done overseas, in Sweden, Japan, China and the Middle East, in Italy – any place but here.

My wife also is a researcher and works here at UCCS as well. When we left California, we donated all of our equipment and supplies – about a third of a million dollars’ worth of goodies – to Cal State Bernardino. We had two choices: Go to great expense to move it or give it away. We really had no place to bring it to – we didn’t move to Colorado because of the university jobs. And there’s no way to re-acquire the highly specialized equipment without research funding. And so I left research.

Martial arts is one of my favorite subjects. I got in to martial arts in the early 1960s because I was interested in self-defense and because Bruce Lee was a big thing. I stayed with martial arts because I found out several things: I enjoyed fighting, but I wasn’t good at it and had to work at getting better, which is a lesson in and of itself; it was one of the first things that taught me that if you really want to do well and exceed, it takes effort and practice; and doing something I enjoyed made learning that much more pleasant.

This seems trivial, but what I also learned is that martial arts becomes a way of living your life. There are lessons to be learned in everything we do, lessons that relate to choices and lessons that relate to understanding problems that people, including ourselves, face. There are lessons in interpersonal communication, lessons in creativity, and lessons in critical thinking and problem solving. It’s amazing what you can do with martial arts. There are several things I do with students. One has to do with perception. You can’t look at someone and determine whether or not that person should be feared or should not be feared or who does or doesn’t know how to defend themselves.

You can’t look at people and render judgements about them; we know that’s an important lesson in life, the old “Don’t judge a book by its cover” adage. You learn this very, very quickly in martial arts: It’s a slower lesson to learn in life.

I’ve been practicing martial arts for more than 50 years and have three black belts. I teach a mixture of one Kung Fu style and an Indonesian martial arts. It’s an in-your-face, take-care-of-business martial art; not sport at all.

I really enjoy teaching students martial arts at the university and in an outside group I work with periodically. One of the things I like to have students think about comes from those old cheesy martial arts movies and spaghetti Westerns. There’s always some really bad character who says something to the effect of “It’s a good day to die.” I have students reflect on that because the statement has nothing to do with death but how one perceives oneself and how committed and how willing to expend effort one is. I also have them reflect on what it means to do something with intention. Of course I try to teach them how to fight and defend themselves. I treat the martial arts the same as I treat my work in biochemistry and the same as I treat my one-on-one dealings with students: I try to teach everyone I encounter about life.

5. What do you consider the “favorite” part of your job?

Interacting with students is the favorite part of my job. I’m not here just to go in the classroom or sit in my office and do nothing and have someone else deal with the students. My job is, from my prospective, to help students in whatever way I can. 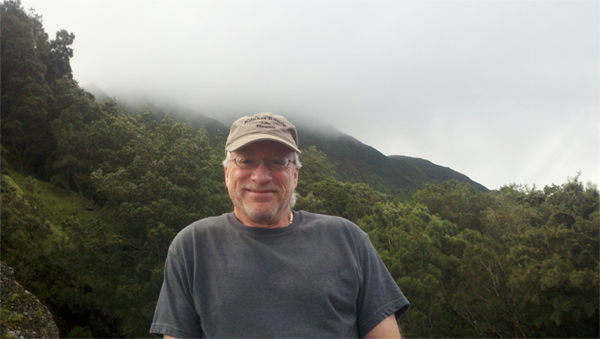 Jerry Phillips on a visit to Hawaii’s Pali Highway.
Tagged with:
research, students