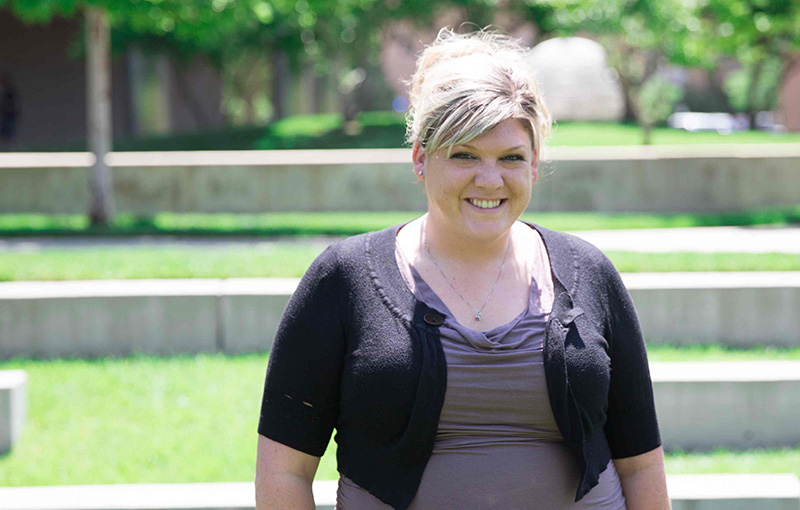 If you have a stereotypical view of a research scientist, then you probably haven’t met Jennifer Hintzsche. The research associate at the University of Colorado School of Medicine at the Anschutz Medical Campus is serious about finding a cure for cancer, but she also knows how to have fun in life. She recently was chosen by middle-schoolers as their favorite scientist, and she described herself to those kids as “loud, smart and silly.”

The smart part is evident. After earning a bachelor’s degree in biology and biochemistry, she went on to attain a master’s degree and her Ph.D. in biology.

“I started out wanting to study cancer in graduate school, but I was really bad at bench experiments,” she said. “So I moved on to bioinformatics and found my calling.”

Although she researched bacteria and plant genomics, she wanted to get back into the cancer field after earning her doctorate. As she searched for a postdoc position, she looked for one that intertwined biology and computer science, and she found that at CU.

“During college, three out of four of my grandparents passed away from cancer, and I think that kind of shaped me,” she said. “My father was diagnosed with prostate cancer as I was going to graduate school. He’s been in remission for over 10 years. Even though I did a lot of different stuff during grad school, I always knew I wanted to focus more on cancer so we could try to find a cure so people who have loved ones going through cancer can have more time with them, like I have had with my dad.” 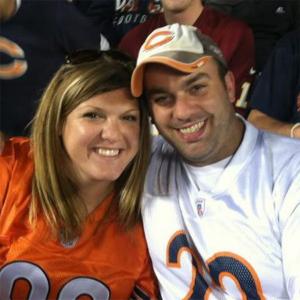 Hintzsche with her husband, Ryan Westphal, at a Chicago Bears game.

She and her husband spend time with her parents at their lake house when they can, and she enjoys the couple’s two dogs and hanging out with friends. She crochets and is learning to knit. She loves football and has a bobblehead of former Chicago Bears linebacker Brian Urlacher in her office. He’s joined by other bobbleheads: Michael Scott from “The Office” and characters from “The Big Bang Theory.” And if that doesn’t attest to her fun-loving nature, perhaps the giant plush toy of microbes in a petri dish – which she thinks are cute and hilarious – will convince you.

1. As a research associate, what is your role in the International Melanoma Biorepository and Research Laboratory and the AC Tan Laboratory of Translational Bioinformatics?

About 95 percent of my work focuses on melanoma. Dr. William Robinson is a world-renowned melanoma expert, and Dr. AC Tan is world renowned in bioinformatics, so the opportunity to work for both of them is an opportunity I couldn’t pass up.

Dr. Robinson has had a biorepository – basically a melanoma tissue bank – for about 15 years. We take samples directly from the clinic and we have done Whole Exome Sequencing on about 800 of those samples. My role is to analyze the Whole Exome Sequencing, which comes from my experience with Dr. Tan in his lab on bioinformatics.

With Whole Exome Sequencing, we are looking for the genomic profile of a tumor. I look at what mutations are present in different tumors in different patients with the goal of finding common mutations that we can treat with drugs. We also have a patient-derived xenograft bank so we can take samples of patient tumors and grow them inside of mice and test them. Part of my analysis is finding the mutations and working with the team to predict drugs that could treat those mutations with the hopes that we can translate that back into the clinic for patients.

We have a weekly scientific advisory board where about 20 surgeons, pathologists, dermatologists, oncologists, Ph.D.s and M.D.s meet to go over all aspects of our work and projects. We get input from everyone in those fields, which is really a beneficial and unique part of our lab.

We have a good time, too. Our lab members are pretty close so we do little excursions. One of our fellows had us over a karaoke night at his house. Next week, we’re having a lab party where we’re going to watch the HBO special on Henrietta Lacks and we’re going to make food that is shaped like cells.

2. In what research are you currently engaged?

We have a lot of amazing projects going on now. Some of it stems from exome sequencing. We identified a molecular target in mucosal melanoma, which is a rare form of melanoma, in order to try and find ways that we can treat that type of melanoma. A molecular target is the mutation or alteration in the DNA of a tumor. We found a mutation common in 40 percent of mucosal melanomas in a gene called SF3B1, so we can now start to figure out why those 40 percent of patients respond to therapy or don’t respond to therapy or if we can target that mutation with a drug to see if it helps decrease the tumor volume.

Another thing we are working on is acquired resistance. Patients with melanoma go on BRAF and MEK  inhibitors. A lot of time that works temporarily, but a lot of time, their tumors come back; they become resistant. We have identified a few new targets of acquired resistance that we have put into our mice and it has worked – the tumors don’t grow – so we are writing a paper on that research now. It’s kind of exciting, and hopefully we’ll be able to translate that to the clinic.

Another project is immunotherapy, which works in about 20 percent of melanoma patients, and so we’re trying to find out what is different about those 20 percent of patients. Immunotherapy works by taking the breaks off the immune systems. The stimulated immune system attacks and kills the tumors. There are some people who are in Stage 4 and go on immunotherapy and within weeks, all of their tumors are gone. It’s pretty amazing, but it only works in 20 percent or so of patients. There also are a lot of adverse events or side effects that happen with immunotherapy, and we are trying to determine who will respond positively and who will suffer bad side effects.

3. You recently earned top honors in an interactive social media competition through I’m a Scientist USA, where students in grades 5-12 chose you as their favorite scientist. How did the contest work and how did you become the kids’ favorite scientist?

It was an “American Idol”-style contest between five scientists. We filled out profiles so the students could see the type of work that we do and what we do for fun. The students could go on the organization’s website and post questions for a specific scientist. The idea is to show that scientists are real people, too. The kids would also chat with us via their classroom computers.

It was a really cool opportunity. The contest lasted for two weeks. During the second week, one scientist was eliminated each day by a student vote. I was lucky enough to be the winner. They also did these cool little Facebook live videos to announce the winners.  (For more about Hintzsche and I’m a Scientist USA, visit https://genomicsm17.imascientist.us/profile/jenniferhintzsche/.)

4. With your prize money, you returned to your hometown of Hinkley, Illinois, on April 27 to talk with students there. What was your message to the kids and what were some of the funniest questions they asked you?

I come from a small town of about 2,000 people and so I never knew any real scientists growing up and I never thought I would be a scientist. Actually, two of my younger cousins were in the science classes I talked to, so that made it extra special. We talked about what it is like to be a scientist, about melanoma and DNA sequencing, and how I can use computers to try to find out what’s wrong with a tumor and see how we can fix it. The best part is that I got to show them a whole bunch of gross tumors, which they loved. Melanoma is not a pretty disease. I have a feeling a lot of them won’t be arguing with their parents about wearing sunscreen anymore.

5. What is the craziest (funniest, etc.) question you were asked by one of the students, either during the competition or at your hometown event?

I had a student who asked me if she got too excited, could she get cancer? I had another student that said his mom told him that if he writes with pen on his arm, he’ll get skin cancer. And he asked me if that was true. I told him no, but that he shouldn’t write on himself and he should listen to his mom.

The stereotype of a scientist is still out there. The first thing I asked the students is what they thought about when they pictured a scientist? Most of them said an old man with crazy hair in a white coat. I also had a student ask me if when I was their age, I knew I wanted to be a scientist. I told them no, that I cared about playing basketball and soccer after school, and that being a scientist is something you can grow into. I like the idea of students being able to see me and talk with me because I don’t fit the typical mold, which can be a good thing.