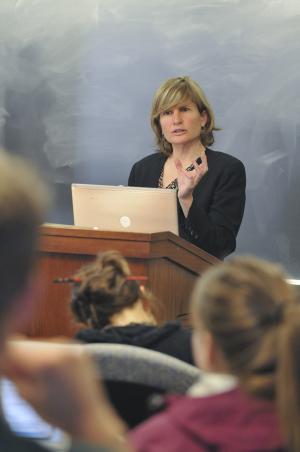 After working in Washington, D.C., for the Department of Justice (DOJ), Helen Norton became a law professor. Her studies and pro bono work continue to focus on constitutional law, civil rights and employment discrimination.

“I write amicus briefs in the U.S. Supreme Court and federal courts of appeal, testify before Congress and federal agencies on civil rights law and policy issues, and I served as leader of President-elect Obama’s transition team charged with reviewing the Equal Employment Opportunity Commission in 2008-09,” she notes on the Colorado Law website.

Norton, who holds the Ira C. Rothgerber Jr. Chair in Constitutional Law at CU Boulder, has been honored with the Excellence in Teaching Award on several occasions, and was appointed a CU President’s Teaching Scholar in 2014.

Outside of her legal work, she is a big sports fan – she played soccer competitively for many years – and enjoys hiking and cross-country skiing. After moving to the mountains, she joined the volunteer fire department that serves that community. 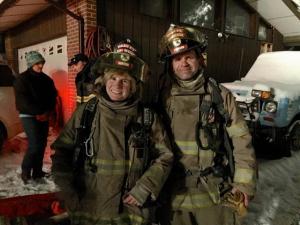 Helen Norton and her spouse, Kenny, serve as volunteer firefighters.

“I did not expect to become a wildland firefighter in my middle years, but it’s been interesting,” she said. “Not only have I seen and done some things that I never expected to see or do, but I’ve learned a lot about teaching and learning. Some firefighting skills fit within my wheelhouse: for example, a lot of it involves repetitive physical labor, and I have plenty of experience with that since I come from a family of farmers. But lots of firefighting skills are tough for me. As one of many, many examples, most of the vehicles are built for taller people, so getting in and out of them is literally a stretch and sometimes a leap for me. It’s humbling to be a novice, not to feel competent.

“And often our students feel that way, too, when they start out and feel challenged in many ways. I’ve learned that all that I can fully control is my effort. I’ve also seen firsthand how the best teachers are those who remember what it’s like to be a novice even when they are now wonderfully competent, even excellent. That requires empathy, anticipating and leaving space for questions, and figuring out how to provide students with meaningful opportunities to try and sometimes fail and learn from the setback as key to growth.”

1. How did you choose this career path and was there a person or event or passion that influenced you?

After I graduated from law school, I took a one-year public interest fellowship in Washington, D.C., working on employment and civil rights law. That fellowship led to other positions in the civil rights community, and later, to appointment as deputy assistant attorney general for civil rights with the Department of Justice during the Clinton administration.

That’s the law part. As for the academics, my job with the DOJ was a political position, so it ended with the end of the Clinton administration. I then thought that it would be interesting and fun to teach for a while before I returned to nonprofit or government practice, so I accepted visiting positions at the University of Wyoming and University of Maryland law schools. The longer I taught, though, the more I realized how terrific these jobs are: the chance to work with fantastic students, the chance to think deeply about important and challenging issues, and the chance to contribute to public universities’ service mission.

2. The mission of the Byron R. White Center for the Study of American Constitutional Law includes “expanding public knowledge and informed discussion about the Constitution.” How have you helped carry out this role of the center?

During the past two years, I’ve organized the White Center’s Rothgerber Conference on Constitutional Law. In 2017, we discussed “Truth, Lies, and the Constitution,” and in 2018 we focused on “Listeners and the First Amendment.” These conferences are open to the public and enable us to bring together a community of scholars to discuss cutting-edge constitutional issues. The University of Colorado Law Review then publishes the resulting papers, allowing us to contribute to the creation and dissemination of knowledge, which is among our most fundamental missions.

3. What do you find appealing about constitutional law as opposed to other aspects of the law?

The Constitution sets out to provide a framework – the rules of engagement – for a functioning democracy. Among other things, it seeks to prevent tyranny and protect democracy by dividing power horizontally among three federal branches, by dividing power vertically between the federal and state and local governments, and by protecting certain individual rights from encroachment by any government actor. And it does this in under 8,000 words. This requires us to give legal meaning to constitutional language that is often very broad and very vague. For instance, what do the constitutional terms “due process” or “equal protection” mean?

4. Some of your scholarship over the years – including some that has been published in 2018 – examines the government’s lies and manufacture of doubt. What have you argued in these publications and what are your conclusions?

Governments have to speak in order to govern. And the government’s speech is unusually powerful precisely because of its governmental source. The government is unique among speakers because of its coercive power as sovereign, its considerable resources, its often-privileged access to key information, and its wide variety of expressive roles, for example, as commander-in-chief, employer, educator, property owner and more. The government’s expressive choices can be servant of, or a threat to, democracy.

5. Your study also includes First Amendment topics. What themes have you researched?

I’ve written a lot on the First Amendment implications of the government’s efforts to regulate lies and other forms of deception by nongovernmental speakers. I think lies are so interesting because they’re commonplace, diverse and complicated – and often so very human. They are told for a wide variety of reasons by many different speakers to a broad range of audiences. This creates challenging questions when we try to explain when and why the First Amendment protects some lies from government regulation, and when and why other lies are sufficiently harmful to permit the government to punish them.

Relatedly, I’m interested in how we think through the problems that arise when constitutional rights and values are in tension. Examples are situations where we feel forced to choose between the equality interests of some and the speech interests of others. Or where we have to choose between speakers’ and listeners’ First Amendment interests, as is the case when listeners want a speaker to disclose certain matters, but the speaker prefers to remain silent – or where a speaker wants to address certain listeners, but the listeners would prefer to be left alone.