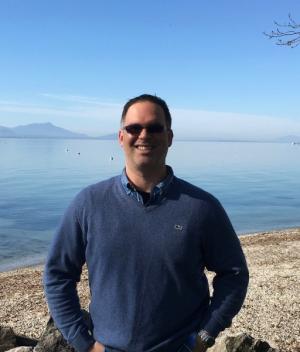 Fernando Rosario-Ortiz at Lake Geneva in the city of Lausanne, Switzerland.

Like many of his generation, Fernando Rosario-Ortiz says, he realized that “a significant amount of environmental damage has been done, and with that as a constant reminder, I (understood) that we have to take care of the environment.”

He was drawn to the study of environmental chemistry, especially in the context of water treatment and the natural systems that affect the resource on which the planet and its inhabitants rely.

“It has clear applications for the way cities treat their water (for consumption) and the way we must deal with contaminants, and I found that to be fascinating.”

Rosario-Ortiz, associate professor in the Department of Civil, Environmental and Architectural Engineering at the University of Colorado Boulder, researches problems that some natural processes and events, such as wildfires, often create for water treatment facilities.

He currently serves as associate director of the Environmental Engineering (EVEN) Program, but on July 1, he will take the helm of the program. He has earned multiple honors, including faculty achievement awards from the university and the College of Engineering. A native of Puerto Rico, Rosario-Ortiz returned to his home after Hurricane Maria to assess water quality.

I went to grad school to become an atmospheric chemist and knew that I wanted to work in an area related to environmental issues, closer to the application side and less from a purely theoretical component.

2. After Hurricane Maria struck Puerto Rico, you found elevated levels of lead in the water supply. Is testing and analysis complete?

I’m Puerto Rican and my whole family is there. When the hurricane happened, there were many concerns for a number of reasons, but being a water scientist, I realized it was a good opportunity for me to go to the National Science Foundation and request funding to do an assessment of water quality in the aftermath of the hurricane.

The original intent of the project was to collect water samples. The situation was pretty bad there, with people who didn’t have access to potable water going to streams to collect water. The intent was more for us to understand potential contamination sources, both chemical and biological. What we were not looking for was lead.

We collected samples for water quality, and when we got the results back, we saw that some of the lead levels were elevated. The problem was we were collecting samples from homes, but we were using connections from outside the houses. According to EPA regulations on lead, that is not the right sampling point, and so what we did was go back to Puerto Rico a handful of times and expand the sampling to ascertain whether the lead levels collected in the taps, whether from the kitchens or the bathrooms, might be of concern to the public,

My main motivation is to try to help my community recover and help with water quality if I can. There obviously are many infrastructure challenges there, but if we find high lead levels in potable water sources, that is a big concern as well.

3. How do wildfires affect water quality and what has your research found?

After a wildfire, slopes might be destabilized, and if you have a rain event, you can have more sediments being mobilized. Sediments can cause real problems to water treatment facility infrastructure, but also concerns for the drinking water.

On the water-quality side, you have contaminants, such as organic carbon or nutrients, that are released into the water. Of course, some of these are not quite contaminants because they always are present in the water, but at higher levels, they can impact the way we need to treat water. If you have a drinking water facility and have a lot of ash coming down, you have to remove that ash from the water before supplying it to the customer. That becomes an operational issue that will impact the capacity of that drinking water facility to produce potable water.

There are also issues with the disinfection byproducts that might be a potential health concern. Finally, there are taste concerns. Consumers like their water to smell and taste a certain way, and sometimes, with wildfires, the water can smell smoky. While it is not a health concern, it is a problem of public perception.

My work mostly focuses on organic compounds from natural origin, but in cases such as in California, other contaminants have been found. If property – homes – are impacted by the wildfire, other contaminants actually can enter the water supply and that is a concern.

4. Two other areas of your research are advanced oxidation processes and environmental photochemistry for water treatment. What are these and how do they work?

Essentially, the larger area of my research would be environmental chemistry, and that involves chemical processes and environment systems. The photochemistry work is essentially studying sunlight-driven reactions in surface waters and how those reactions can actually degrade contaminants of concern.

We spend a lot of time studying different chemical pathways so that we can better understand how sunlight interacts with different constituents and what kind of reactive species are formed and what kinds of degradation of organic contaminants you can expect out of that. With some products, retention ponds for developing communities, for example, there is the potential for the activation of pathogens just because the pond is exposed to sunlight. We also research the wastewater stream and the kind of photochemical reactions that occur so that we can ascertain the impact of contaminant degradation.

There are widespread applications of wastewater reuse for nonpotable use, but there also is movement into potable applications. With climate change and dwindling water resources, it becomes a real alternative for systems that may be under water stress and population growth

For indirect potable reuse, you take wastewater and treat it to a pretty high degree, and then you have an environmental buffer, such as an aquifer. The water gets drawn out of that environmental buffer and it is used partially as a source water. That system has been used in California and elsewhere.

There also is a movement toward eliminating the environmental buffer, which would be direct potable reuse. However, there are some concerns with that because you want to make sure that there are multiple levels of protection against potential pathogens or contaminants in the water. Ultimately the research will go that way, and there already are some examples of that type of application in the world.

5. You will take the helm of the EVEN program July 1. What are your goals going into the position?

It is a program that is very successful – one of the highly ranked programs in the College of Engineering. One of my goals is to continue the upward trajectory when it comes to growing the program and also working on some specific aspects, such as improving the sense of community between students and faculty and staff. I want to bring in additional faculty, especially to expand the diversity of the campus, which is an issue at this institution.

Essentially, we want to attract the best students that we can that represent the diversity of the state and make sure we continue to provide a service to the community by graduating students that can perform their jobs in the best way they can.

Tagged with:
Department of Civil Environmental and Architectural Engineering, research