The walls of Balaji Rajagopalan’s office are covered with maps of the world and the United States. He is fascinated by the physical, climatological and cultural diversity represented by those illustrations, and that inspires him.

“It motivates me to learn more about them and their interconnections. It exhorts us to think and raise above our parochial and petty minutia of daily lives and provides a humbling space-time perspective on life,” said Rajagopalan, professor and chair of the CU Boulder Department of Civil, Environmental and Architectural Engineering and a Fellow at the Cooperative Institute for Research in Environmental Sciences (CIRES).

Recently, he was honored as a 2018 Fellow of the American Geophysical Union (AGU) in recognition for his research involving climate variability and its effects on the planet’s water sources, including Indian monsoon rainfall variability.

In 2000, he joined CU Boulder, which he says is an attractive environment because of its renowned researchers in diverse areas across the campus as well as nearby federal agencies such as National Oceanic and Atmospheric Administration (NOAA) and National Center for Atmospheric Research (NCAR).

1. Your research focuses on sustainable water quality and quantity for a growing population stressed by climate variability. What has your study found and what impacts or potential influence has it had?

Competition for freshwater resources, the basic necessity of life, is intense as global populations increase given the spatial and temporal variability of the resource. That is exacerbated by climate change. Ensuring that we have a safe and reliable water supply for the burgeoning global population is the defining challenge of our times.

My research is broadly in three interconnected themes: (i) understanding the large-scale climate drivers of year-to-year, multidecadal and multicentury scale variability of regional hydroclimatology (i.e., precipitation, temperature, streamflow, etc.) and extremes; (ii) developing stochastic forecasting and simulation methods of hydroclimatology, incorporating the large-scale climate drivers, and (iii) coupling the forecasts and simulations with efficient management and planning of resources.

Working with colleagues at CU, our research has proven to be of immense value in the operations, management and planning of water resources in the semi-arid river basins of the western U.S., especially the Colorado River system. This system, with all its history, culture, legal and climate constraints, offers a fascinating and multidisciplinary research problem, one that is highly relevant to our water sustainability.

Understanding the variability of flows in the Colorado River under global warming, and placing it in the context of past variability, is one of my current areas of pursuit.

2. Another area of your research deals with Indian monsoons in both contemporary times and during the Holocene. How do you conduct your research? 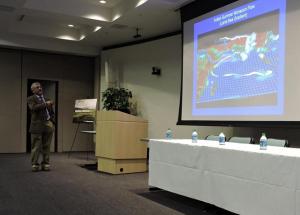 Rajagopalan giving a keynote talk at the Climate and Health Summit.

Uncovering the variability of the Indian monsoon at contemporary and paleo time scales is a labor of love. This understanding will potentially have a positive impact on the socio-economic health of more than a billion denizens of the Indian subcontinent. Because I grew up in India with water shortages due to the vagaries of the monsoon rainfall, this research has a special personal meaning.

Variability of monsoon during the Holocene has had significant impact in the rise and fall of civilizations in the Indian subcontinent, which offers unique lessons for modern societies experiencing warming climate variability due to climate change. Collaborating with renowned paleoclimate experts at CU, in particular professor Peter Molnar of Geological Sciences and CIRES, has been highly rewarding and fulfilling.

The recent research with Peter led to quantitative reconstruction of Indian monsoon rainfall and tropical Pacific Ocean temperatures during Holocene, which offered new insights into physical mechanisms for monsoon variability during this period. We are also working together to try to apply similar methods to reconstruct and understand the variability of the monsoon during the Pliocene. During the Pliocene, the planet was much warmer than it is today and there were no polar ice caps, thus offering an analog to the warmer climate that we might enter going forward.

The monsoon research journey has been fascinating to me. As I mentioned, it is a labor of love, with no formal grant funding resulting in impactful insights. A lesson here that I take away is that sometimes not having funding liberates you to pursue creative ideas purely for the joy of discovery. Of course, a good part of it is my good fortune of crossing paths with top-notch research collaborators and colleagues.

3. Are there other areas of climate and water studies that you are pursuing? 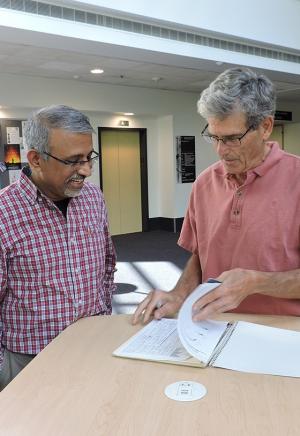 A recent area of my research working with colleagues across CU (CU Boulder, CU Denver and the School of Medicine at the CU Anschutz Medical Campus) involves understanding and modeling climate extremes and the links to public health, especially in tropical countries. This will be a major crisis facing all of us, but it will be a critical issue for developing countries and will have global implications. Several climate extremes influence health. The most obvious is heat waves. If you are in North America or in the developed world, climate impacts are mitigated to a large extent by infrastructure. When it gets hot here, we have access to safe and reliable drinking water and air conditioning, which we take for granted. In Africa or India or Central America, however, these resources are not readily available.

In addition, in tropical countries, there are several infectious diseases such as malaria, dengue,  typhoid, etc., which are climate-sensitive and influenced by the monsoonal rains. Warmer climate will make these diseases spread to northern latitudes, which will be a major public health crisis. We already see this with incidences of West Nile Virus extending to the northern parts of the United States, even in Colorado at 6,000 feet in elevation. Higher latitude and altitude will not be a robust protection as climate warms.

In this era, research problems that are intellectually challenging, exciting and have contemporary relevance reside at the intersection of disciplines. Intellectual restlessness, curiosity and willingness to learn new topics are imperative for pushing the boundaries of knowledge and have societal impact.

4. You’ve won many awards and had many achievements, including the recent AGU award. What does this award – and others – mean to you?

Being elected a Fellow of AGU by my peers is a significant milestone. Reflecting on my modest beginnings and being the first in my family to attend college, this honor is especially rewarding to me.  No more than 0.01 percent of the total AGU membership is recognized for this honor. The fact that my monsoon research is highlighted in this recognition is joyful.

Two other awards that I am proud of are the Norbert Gerbier – MUMM International Award given by the World Meteorological Organization (WMO). It is awarded each year for the best paper in climate science, and we won it for our paper in Science in 2009. We uncovered flavors of the El Niño phenomena influencing the occurrence of droughts over India. These flavors are now used in understanding the seasonal climate variability over several parts of the globe.

The other is the Partners in Conservation Award from the Department of the Interior (DOI), which was given to a group of researchers and stakeholders who played a key role in the adoption of innovative, new operational guidelines for managing the Colorado River during drought years. Stochastic streamflow methods developed in collaboration with colleagues, in particular with my colleague professor Edie Zagona and several students, some of whom are working for DOI, were used in the guidelines. This award was presented to the group by the Secretary of the Interior in Washington, D.C., in May 2009.

The Indian Monsoon and Colorado River are close to my heart, and being recognized for my research in both is of great personal and professional satisfaction. I have been fortunate to have great mentors, collaborators and students over the years since my time in graduate school. They continue to inspire and lead me to new frontiers to explore. They share in this recognition as much as I do.

5. What are some hobbies or leisure activities you enjoy outside of work?

Reading nonfiction and listening to all varieties of Indian and Western classical music keeps me occupied outside of work. I am also learning to play the North Indian classical percussion instrument, the tabla, for it soothes my mind. I have always been interested in Indian classical percussion, but never had the opportunity to learn an instrument formally. Last year I turned 50, and I decided to learn something new and, with the discovery of an excellent teacher in the vicinity, began learning tabla. The instrument offers more opportunities to be creative, a lot like jazz, which also made it attractive to me.